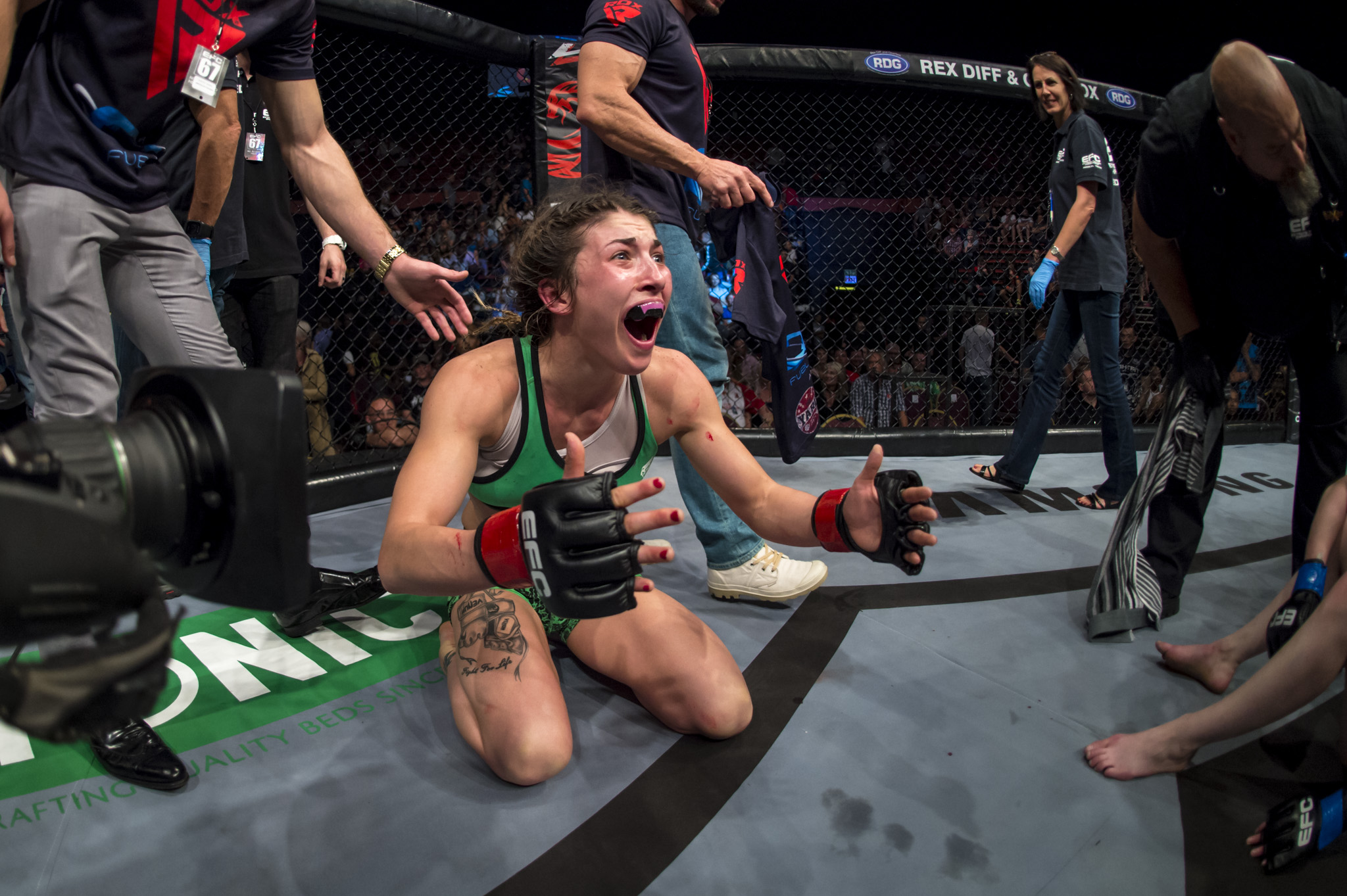 The inaugural women’s strawweight bout between South Africa’s Danella Eliasov and Italy’s Chiara Penco began at a blistering pace. Eliasov stormed the Italian but was quickly getting beaten back by powerful, crisp boxing. Penco established dominance in the first, and kept it, firing powerful punches that kept Eliasov pinned down.

Eliasov began the second hunting for a takedown and a change of pace, and succeeded quickly, dropping the fight to the canvas. Penco proved to be skilled there also, threatening with an armbar, before the fight was stood up by referee Bloch.

The third revealed Eliasov’s traditional strength – unbelievable toughness. Penco began to visibly fade while Eliasov remained her juggernaut self, beginning to push the striking pace and capitalizing by taking Penco down, and dominating her with ground and pound. Penco showed true grit to survive the round.

Penco seemed battered and gone going into the fourth, but dug deep and suddenly stunned Eliasov with a triangle, which morphed into an armbar, and had the African MMA legend Eliasov tapping to the pressure.

Commentator Dirk Steenekamp called it a war of attrition, and so it was – a brutal and satisfying battle, revealing a true champion in Italy’s 22-year-old Chiara Penco.

Expect the unexpected, was the watchword when EFC featherweight champion Igeu Kabesa faced late replacement, Brazilian Paulo Silva. Silva is a 34-fight veteran, a BJJ black belt, and a heavier, unknown entity. Kabesa took on the challenge without batting an eye, and battled the bigger man in the clinch for the first round and a half.

A forced separation by referee Bobby Karagiannidis set up a flurry of strikes from both, and a lighting fast, weaving, spinning back elbow that rocked the Brazilian, and dropped him to end the fight by TKO.

Kabesa took on a fearsome challenge, and although it was not a title fight, has added significantly to his legend. At only 24, the featherweight champion’s future looks brilliantly bright. Who is next for the wrestler turned KO King?

The bout between South African Warren Allison and the Netherlands’ Renier de Ridder was touted as a clash of grappling titans, but did not deliver. De Ridder took Allison down with absolute ease, smoothly set up an armbar, transitioned to a rear-naked choke, and finished the South African early in the first round.

Many were puzzled. Is De Ridder that good, or did Allison simply freeze? De Ridder is now in poll position to challenge for the title.

War horse Gordon Roodman stepped out against ‘TF1 – The Fighter’ alumni Khulekani Hlongwa, and the two went at it in what was shaping up to be an unforgettable war. An unintentional groin strike ended the fight early, however – an official no contest after Roodman was injured in the first round.

The evening’s main card began as if with a bomb blast. The highly anticipated matchup between South Africa’s Bokang Masunyane and England’s Coner Hignett exploded with aerial action. Masunyane advanced with his trademark barrage of aerial takedowns – this time, however, met by granite defense and Hignett answering with strikes.

Masunyane’s attack was slowed, but not stopped, and Hignett soon got taken to the canvas. Masunyane began his brutal top control game, smothering Hignet throughout the first two rounds. In the third Masunyane attempted a striking attack, but quickly felt the superiority of the Englishman, and reverted to his ground dominance, grinding out an enthralling decision win.

The official EFC 67 results are:

All eyes now turn to EFC 68 Van Staden vs Hughes, Mazany vs Bright is presented by Betxchange.com and takes place on Saturday 31 March live from GrandWest, Cape Town. Tickets are on sale at computicket.com, and the 5 main card bouts will be broadcast live on kwesesports.com (Sub-Saharan Africa), Kwesé Free Sports 1 (Kenya & Rwanda), TVplayer (UK) and live in South Africa on SABC 3 starting at 21:00 (CAT). Full broadcast details available on efcworldwide.com.