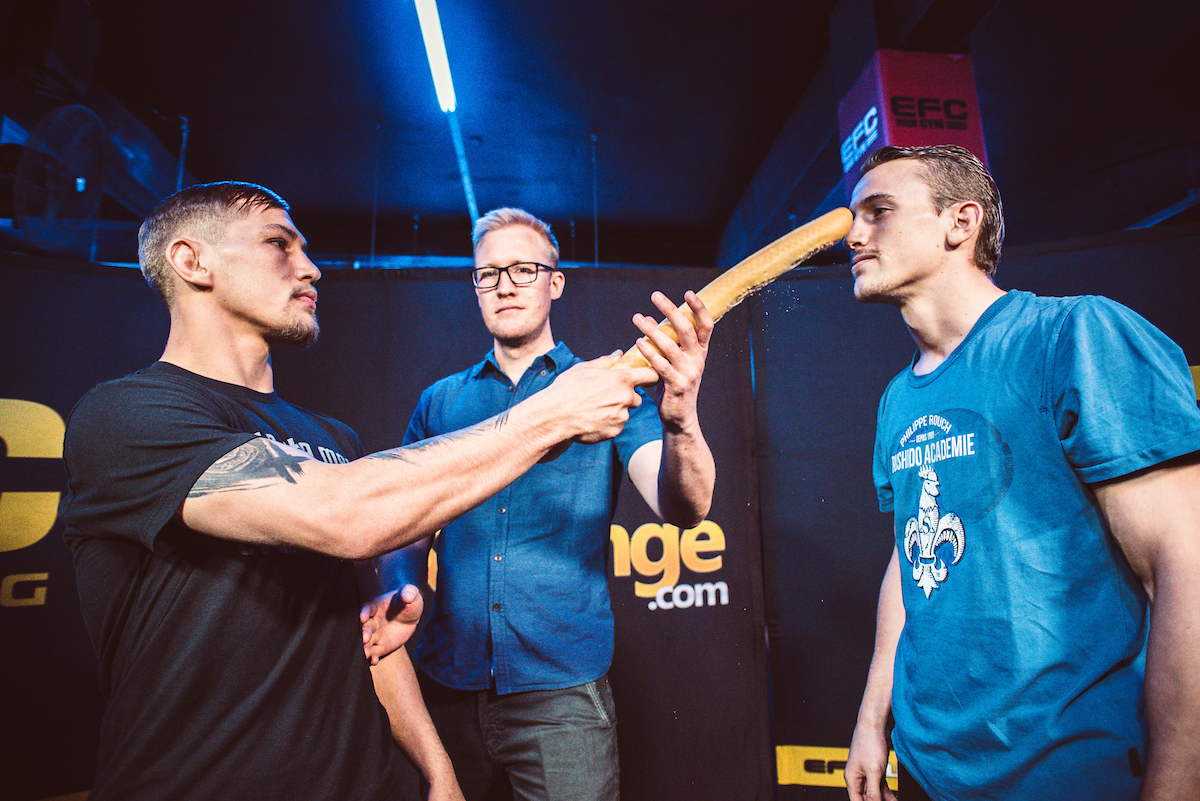 Johannesburg, South Africa – Rivalries hit boiling point this past weekend at the EFC 69 open workout. The EFC bantamweight championship fight took centre stage when South Africa’s JP Buys and France’s Philippe Rouch faced-off for the first time. When called to the centre, Buys antagonized the Frenchman with a baguette and went on to controversially strike him with it in the face.

Buys, the former EFC interim flyweight champion has moved up a division to chase his second EFC title. Meanwhile, Rouch is on a six-fight win streak and earned the No.1 contender status. They are set to clash this Saturday, live from Carnival City, JHB and surprisingly, Rouch has opened as the betting favourite over hometown athlete Buys.

After the baguette was destroyed by a visibly agitated Graeme Cartmell, EFC VP of Talent, the two refused to break eye contact in an exceptionally intense face-off.

Rouch who has arrived early for media obligations, responded off-camera to the incident with “I’m gonna shove it up his %$&#.”

When reached for comment, Rouch’s coach James Schiavo responded, “We will be there on Wednesday for the press conference to back-up Philippe and on Saturday we will claim the belt.”

Similarly to the main event, South Africa’s Quaid Openshaw is seen as the underdog against TF1 runner up, France’s Ibrahima Mané.

Fans have the chance to triple their money, should Angola’s Marino Cutendana manage to pull off the upset against Zulu in the co-main event on Saturday night.

There’s big money to be made on the prelim card with various underdogs.

Specifically, Anicet Kanyeba offering fans the chance to more than triple their money on the night when he faces the resurgent Luke Michael.

Two more prelim bouts are still to be added and will offer fans many more ways to win big.

Odds are subject to change. Place your bets now at BetXchange.com.

EFC 69 Buys vs Rouch, Zulu vs Cutendana is presented by Betxchange.com and takes place on Saturday 28 April live from Carnival City, Johannesburg. Tickets are on sale at computicket.com, and the 5 main card bouts will be broadcast live on Kwesé Free Sports 1 (Kenya &amp; Rwanda), Kwese TV (Sub-Saharan Africa) and live in South Africa on SABC 3 starting at 21:30 (CAT). Full broadcast details available on efcworldwide.com. Prelim fights will be available for free on the official EFC Facebook page.