‘MAD DOG’ AND ‘THE LIONESS’, SET FOR DURBAN’S BIGGEST BATTLE

Lino and Zouak on weight at EFC 70 weigh-in 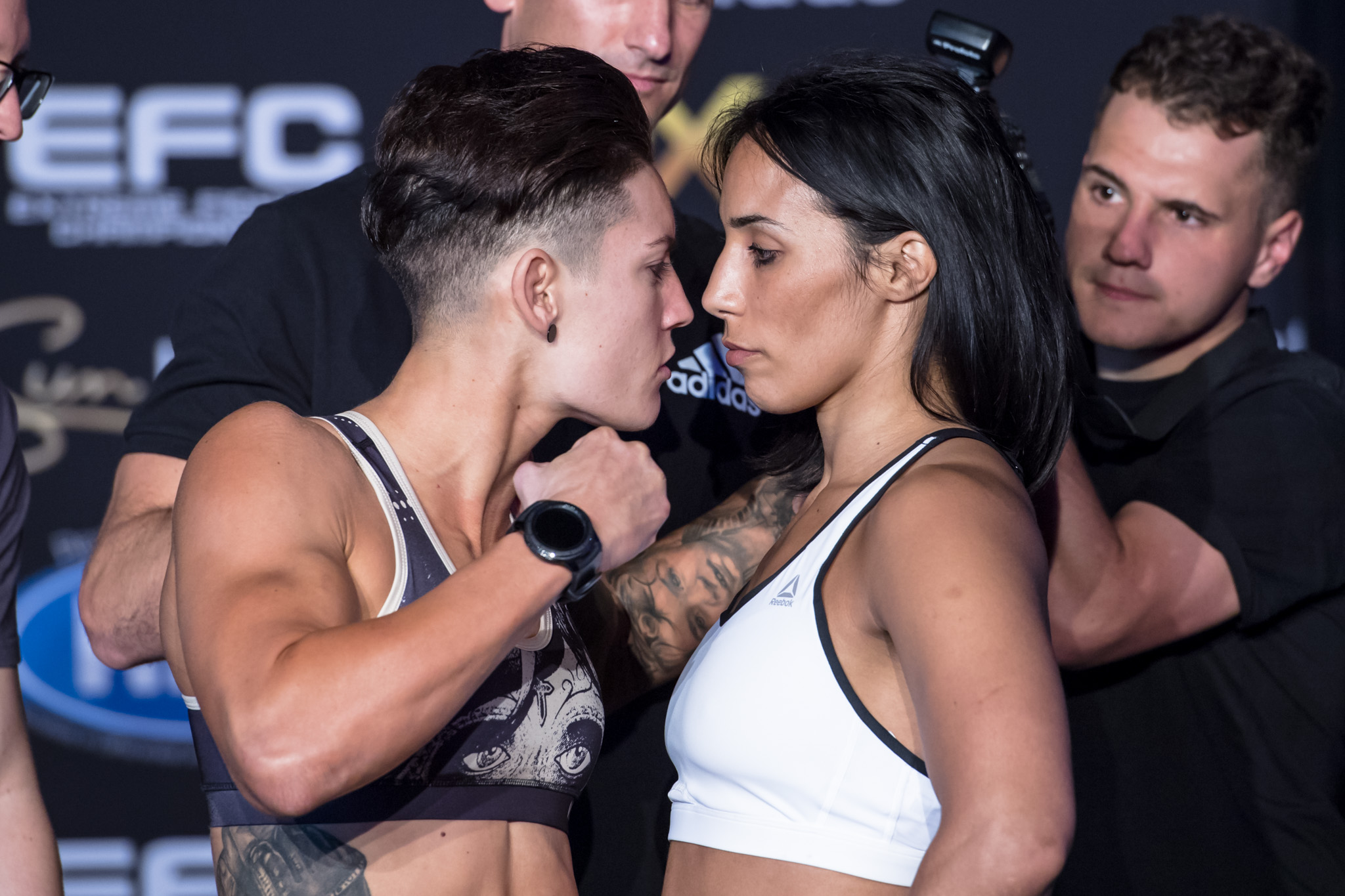 Their bout has bred a rare intensity. Lino’s camp have said that Zouak’s unwillingness to drop to flyweight betrays a ‘weakness of character’, which Zouak has taken personally. Their enmity spilled onto the stage when the two stared each other down.

Lino and Zouak fight for the inaugural women’s bantamweight title tomorrow night, with Lino taking a step up from the flyweight division in an attempt to secure two titles. The rivalry between the women is fierce, and their mutual explosive style coupled with Zouak’s Olympic Judo pedigree, promises a riveting battle.

South Africa’s Jacqualine Trosee takes on Nigeria’s Bumni Ojewole at bantamweight in tomorrow’s penultimate bout. Both made weight, and their face-off was a study in crisp professionalism.

Ojewole is a recent Brazilian Jiu Jitsu silver medalist at the UAEJJF world pro in Abu Dhabi, making her an extremely accomplished ground fighter and a strong antidote to Trosee’s powerful strikes and pressure-styled ring craft.

Durban favourite Dansheel Moodley drew a roar from the crowd as he stepped out to weigh-in and face-off against Angola’s rising star, Josémar Octavio. Both men are on a two-fight winning streak, and motivated to take a crucial step to three in a row and a shot at the division’s top athletes.

Banter between the two has been spirited, but tinged by grudging respect.  Strydom is in need of an EFC win, while an Mndebela victory will bring him three straight wins, and legitimacy as a future title contender.

The EFC 70 main card opens with two of Durban’s finest facing off.

Yusuf Hassan is the youngest of the legendary Hassan brothers, kingpins of Durban’s MMA landscape, and rival Durbanite Martin de Beer has created his own legacy with a solid 6-4 EFC record.

With both men coming off of a loss, and with the added motivation of battling in front of family and friends, they brought a fire to their face-off that will open tomorrow’s main card with a bang.

Two athletes failed to make weight. August Kayambula was 4kg over, and Zwelibanzi Ngema missed his mark by 1kg. Both will compete with financial penalties.

The official EFC 70 weigh-in results are:

EFC 70 Lino vs Zouak is presented by Betxchange.com and takes place on Saturday 26 May live from Sibaya, Durban. Tickets are on sale at computicket.com, and the 5 main card bouts will be broadcast live on Kwesé Free Sports 1 (Kenya & Rwanda), Kwese TV (Sub-Saharan Africa) and live in South Africa on SABC 3 starting at 21:30 (CAT). Full broadcast details available on efcworldwide.com. Prelim fights will be available for free on the official EFC Facebook page.