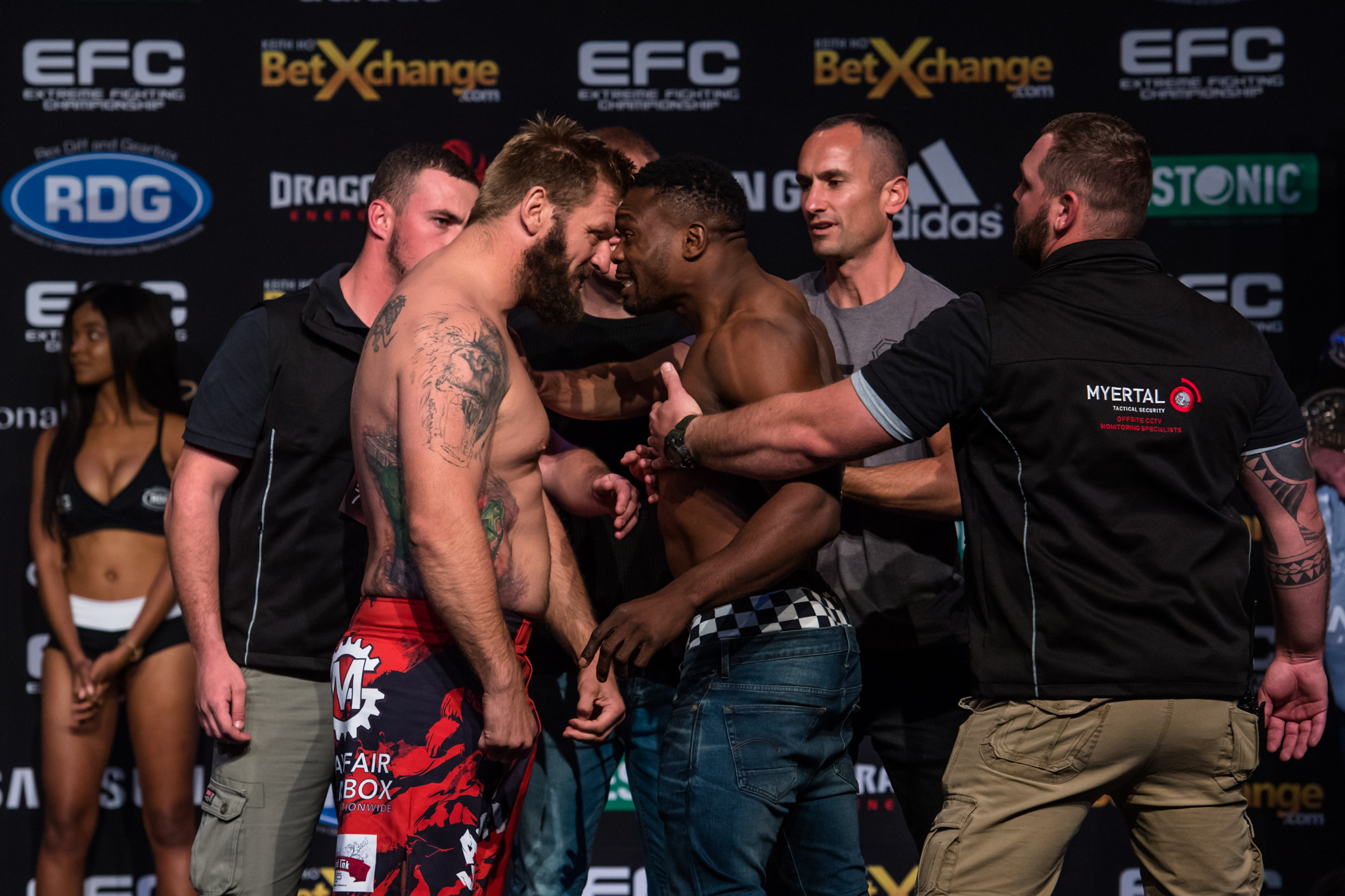 Dalcha’s incredible victory against England’s Stuart Austin has painted him as the hero capable of the impossible. Against the organisation’s heavyweight King, he is attempting the same feat once again.

Dalcha hit the scales today at a modest 97,6kg, in contrast to the monstrous 116,9kg Van Zyl brings to the fight. Carnival City’s Mardi Gras theatre hit fever pitch when the two faced-off for the final time. The normally mild mannered Van Zyl revealed the truth of what it takes to exist at the top of the heavyweigth pile, with a sneering march forward into the challenger’s face. Dalcha, pumped up high with the intensity of the chanting of his Congolese fans, stood his ground.

In the weight and experience stakes the fight seems a foregone conclusion in Van Zyl’s favour. But Dalcha has faced similar circumstances before, and shocked the world. The world waits for the first buzzer of Van Zyl vs Dalcha tomorrow night.

EFC flyweight champion Nkazimulo Zulu is lucky to have an opponent for tomorrow. After initial opponent BK Masunyane withdrew none would face him, but Brazil’s fearless ‘Popeye’, Magno Alves.

Alves sent his EFC fans a heartfelt message of thanks for the opportunity and the welcome, before staring down a truly terrifying champion. “I love you South Africa, but I came to get my belt,” Alves bellowed over the mic.

Alves is known for his all-round skill and plucky go-forward style, and, backed by a parade of tough battles fought across the globe, is undaunted by the champion’s reputation for sending opponents to hospital.

Both hit their flyweight mark, and are primed to deliver what could easily be tomorrow’s fight of the night.

Former multiple title contender Cedric Doyle returns after a two year layoff, stepping in against the Congo’s Trezegeut Kanyinda, ready to re-establish his title legitimacy. Both qualified for the 66kg featherweight mark, setting up a solid test for both men tomorrow.

Judo blackbelt Luthando Biko faces the undefeated Muay Thai stylist Steven Goncalves, in a bout that will put the winner in the division’s top five. Both hit the featherweight mark.

Apart from the heat of the heavyweight face-off, welterweights Pietie Coxen and Conrad Seabi stole the show. Seabi got right in the face of Coxen at Wednesday’s press conference, and security was on hand to defuse what was expected to be raucos meeting today.

As Seabi steamed in after his stint on the scale, Coxen stepped aside with a smile. Coxen laughed with the crowd while Seabi paced in fury. Expect bitter fire from these two tomorrow.

Three athletes failed to make weight. Debutant Pavier was 2kgs over, Jasen Van Der Merwe 1,9kg over his limit, and Marcel Els missed weight by 1,3kgs. All will compete under a financial penalty.

The official EFC 71 weigh-in results are as follows:

EFC 71 Van Zyl vs Dalcha, Zulu vs Alves is presented by Betxchange.com and takes place on Saturday 23 June live from Carnival City, Johannesburg. Tickets are on sale soon at computicket.com, and the 5 main card bouts will be broadcast live on Kwesé Free Sports 1 (Kenya & Rwanda), Kwese TV (Sub-Saharan Africa) and live in South Africa on SABC 3 starting at 21:30 (CAT). Full broadcast details available on efcworldwide.com. Prelim fights will be available for free on the official EFC Facebook page.