Champion and former champion on weight ahead of EFC 72 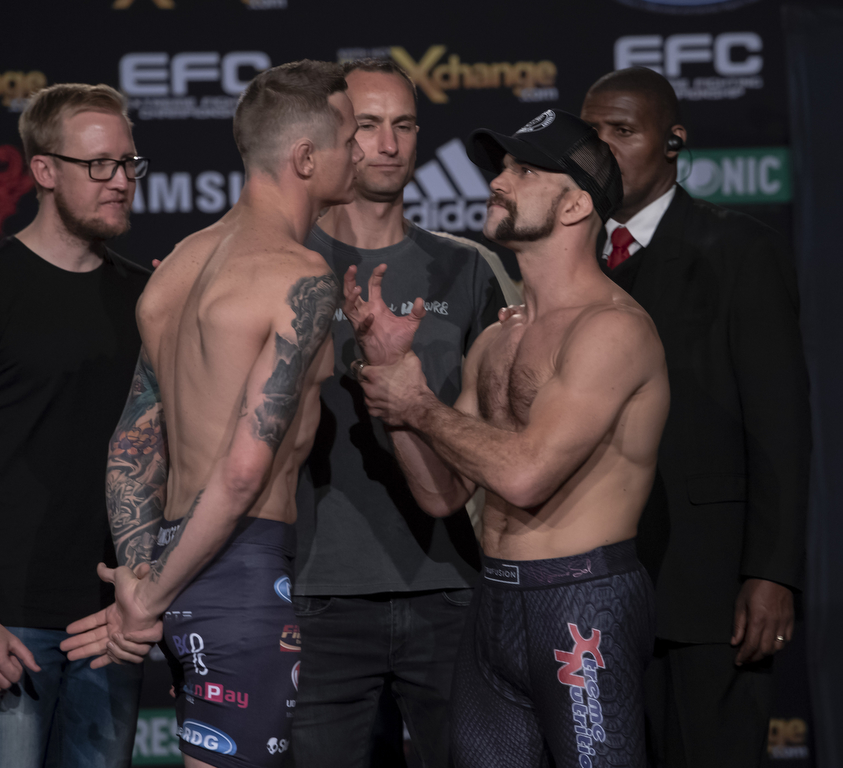 Van Staden is at the apex of his abilities, one of the most experienced athletes in the EFC organisation, as well as one of the world’s most brutal finishers. Mazany is his near mirror image, a veteran who, apart from his loss of the title two years previously, has been on a savage tear.

For both the coming bout is not personal, rather a career milestone with their opponent playing a necessary role. Van Staden seeks to solidify his champion status with a succesful defense, while Mazany is obsessed with reclaiming his former belt, and champion status.

“Tomorrow I am going to go out there, do my job, and raise my hand with the strap,” stated an ultra-cool Van Staden.

“I am thinking about redemption and getting what is mine. This is a point of no return,” roared Mazany in response. “Burn the boats, baby, the ‘Pain Train’ is coming for what’s his!”

Tomorrow’s penultimate battle features former light heavyweight champion and Cape Town’s own Gideon Drotschie (6-3), facing the UK’s Jenaid Ebanks (2-1). Drotschie is making his first cut to middleweight, and the pressure is on for him to make a statement in his new division, in front of his home crowd.

“It’s time to beat up another Pommie,” the former champion stated, referring to his previous win over the UK’s Frasier Opie. “I am going to take the middleweight division by storm.”

Ebanks, on the back of a week of searing banter between himself and Drotschie was to the point in response. “This boy is going to sleep in the first,” he said, with a wink to Drotschie’s fans.

Tumisang Madiba makes his return after a two year layoff, and tomorrow faces Cape Town’s own Faeez Jacobs. Both are highlight reel machines, each having banked numerous performance bonuses in the past. Their face-off was intense, with Faeez the younger playing the energy of the standing crowd, while Madiba absorbed the chaos with an experienced calm.

Cape Town’s Justin Smith burst onto stage with a roar from the crowd, revealing a massive fan base that has been waiting for the young athlete’s ascension to the main card. Fellow Capetonian Giovanni Pretorius meets him tomorrow night. Both are undefeated.

Controversy dogs Cape Town born and now Johannesburg based athlete Luke Michaels’ bout. He faces Capetonian Armand Scheepers, who came in a staggering 9kg over the scheduled welterweight limit. At the time of writing negotiations were still underway to secure acceptable terms for the bout to continue.

Apart from Scheepers, Anthony Mailer was 2,15kg over his 66kg limit.

The official weigh in results are as follows: