“I BACK DOWN FOR NOBODY” 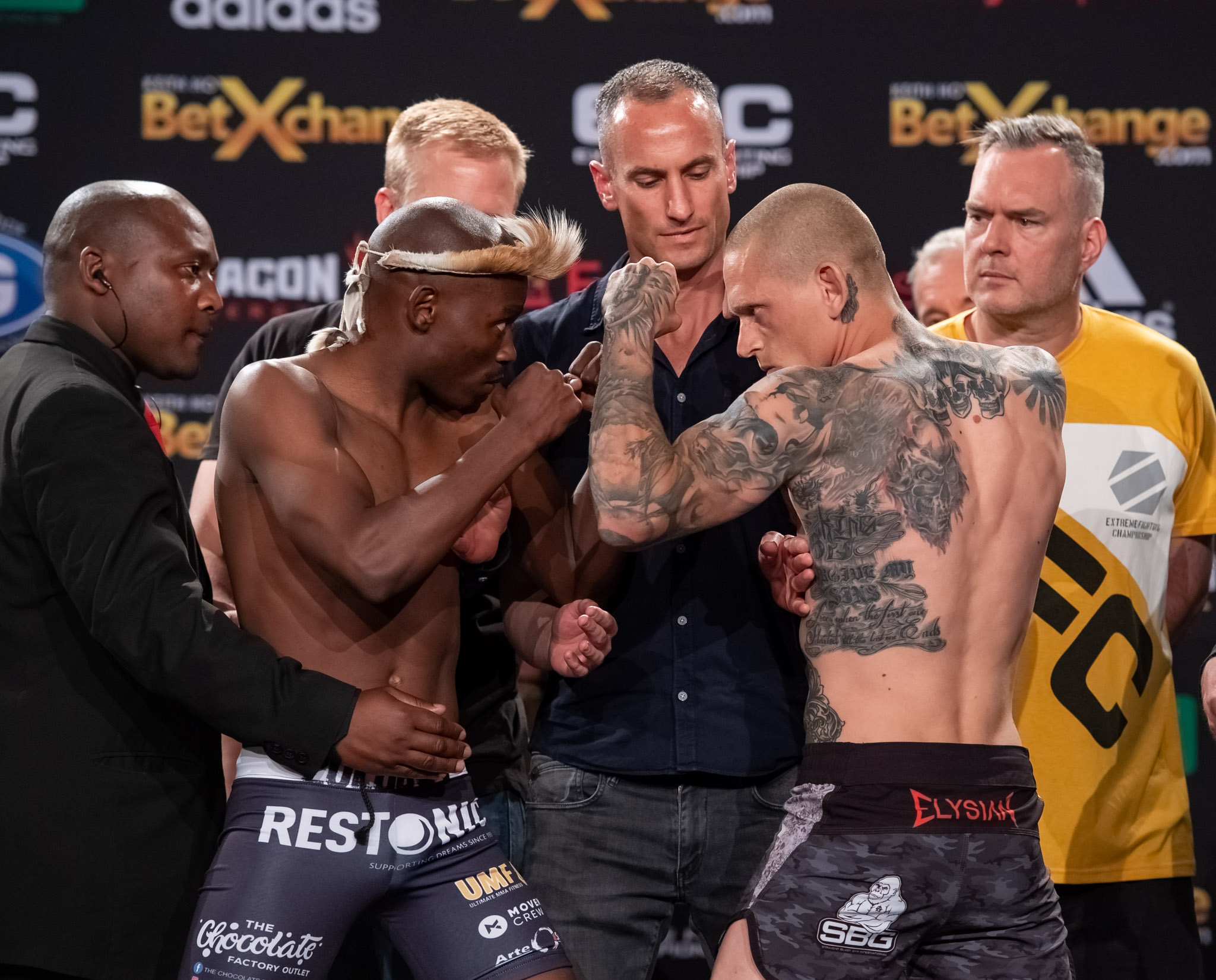 Cape Town, South Africa – One of the most intense fight build ups in recent memory reached its zenith today, when EFC flyweight champion Nkazimulo Zulu (10-2) faced off against challenger Gary Joshua (4-0), at the official EFC 75 weigh in at the GrandWest Arena.

Joshua faces the organisation’s most lethal champion in front of his own home town crowd, and promised a war tomorrow night.

“There’s only two ways this fight is ending,” said the challenger, “his head on a pike, or me on my shield.”

The dominant champion Zulu was matter-of-fact in his interview. “All the talking is done now, I came here to smash him,” he said, before inviting the crowd to name how he would put Joshua away.

After both made weight the two continued the tone of respect and brotherhood they have shown throughout.

“I’m feeling good, I’m feeling strong,” said Biko. “Me and Cal are going to put on a show for you guys.”

“The magic is going to happen tomorrow night,” added Ellenor, promising the crowd a fight to remember.

Cape Town’s Armand Scheepers faces England’s Joe Cummins, and once again found himself on the wrong side of the scale. After missing weight against Luke Michael at EFC 72, also held in Cape Town, this time Scheepers was 2lbs over.

“I’ll fight him at any weight,” Cummins said at a midweek press conference, and made good on his word. Scheepers will compete and suffer a financial penalty.

The dangerous Mzwandile Hlongwa returns to the Hexagon to face another returning hero, Norway’s Torbjørn Madsen, who last appeared at EFC 68 in Cape Town.

Madsen carries the honour of competing in the first live event broadcast to his home country tomorrow night, a nation where MMA is still prohibited from live competition. A technical competitor, the powerful aggression of Durban’s Hlongwa against Madsen makes for a riveting matchup.

Capetonian sensation Faeez Jacobs hit the scale with a message scrawled across his arms and chest, direct for the fans he fights for. “Dream, Believe, Achieve,” read his inspirational message, one he has stood for all throughout his metoric rise in the organsiaton.

The official EFC 75 weigh-in results are as follows: