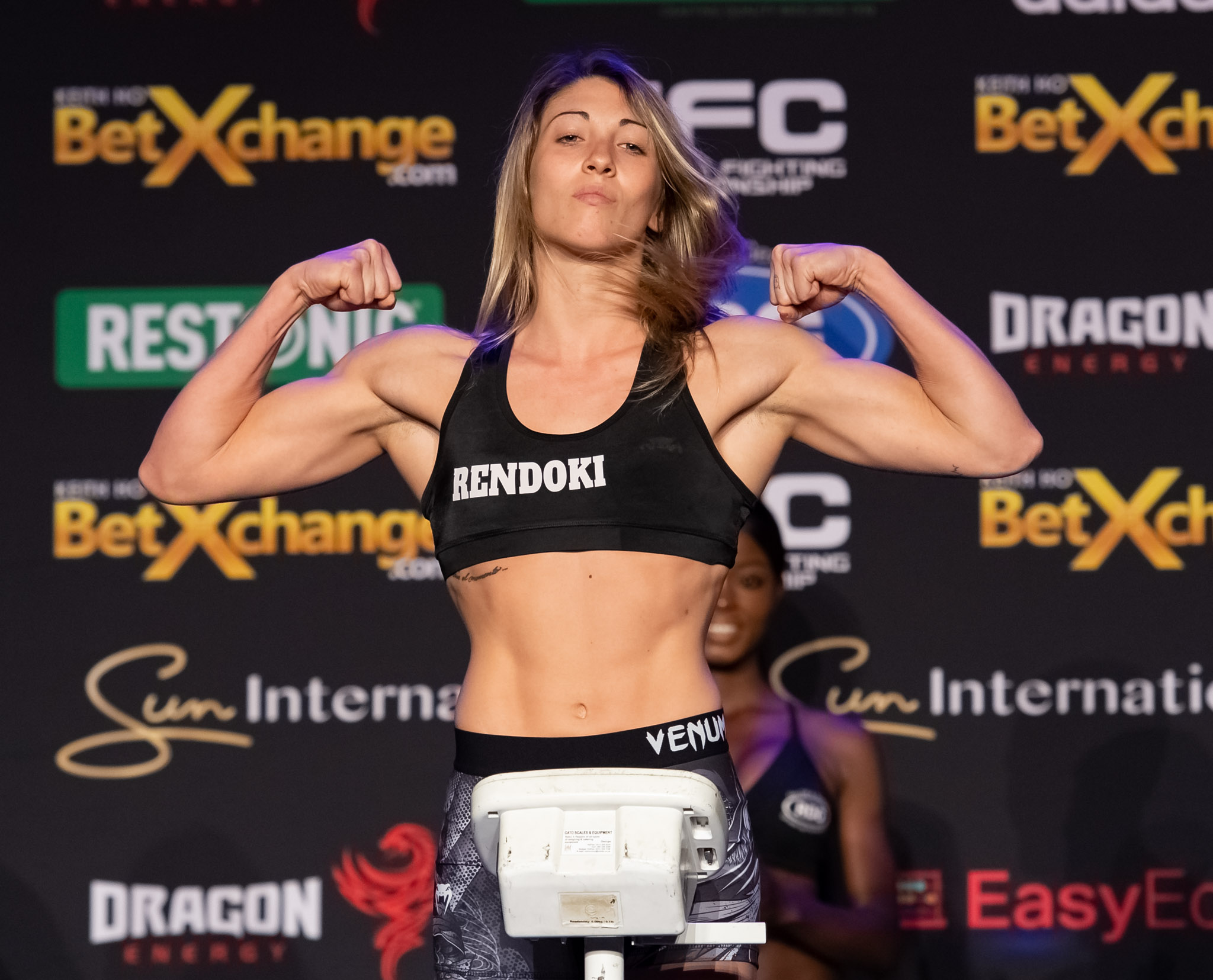 Penco hit social media early in the day suffering the effects of a brutal weight cut, but hit her 115lbs mark also, and rallied magnificently to take the stage at 14H00 Central African Time. Her opponent Wójcik steps into the bout via short notice entry, after former opponent Cheyanne Vlismas had to withdraw due to illness.

“Look, this should be happening, because I won my last fight,” said Wójcik, referring to her controversial split decision loss in a bout that is universally acknowledged as one of the greatest women’s encounters the EFC organisation has yet seen. “I will show everyone who I am. I hope she is ready for that,” Wójcik continued.

Penco, riding a massive publicity wave on the news that her bout will be broadcast live in Italy for the first time, replied with the confidence of a champion.

“Tomorrow you can expect to watch a great fight, and a new Chiara in the cage,” said Penco.

In the co-main slot, legendary two-time former EFC heavyweight champion Ruan Potts returns for a shot at his belt, in the wake of champion Dalcha Lungiambula preparing for a super fight. Potts has been sidelined for over a year due to injury, and addressed the issue.

“Everyone talks about the ring rust, I enjoy that,” said Potts. “We are in South Africa, my terriroty. The belt is coming home, where it deserves to be.”

American Vanderaa was his usual entertaining self, sporting a bow-tie and more interested in the health of commentator Cyrus Fees than answering questions on the fight.

“I don’t care for titles,” boomed the smiling American to laughs from the crowd. “I’m here to fight, what more do you want from me?”

On Potts’ home ground advantage, Vanderaa had something to add, however.

“He says this is his home town but I think we can both agree, I’m at home here too.” After his unforgettable title fight with former champ Van Zyl in the same venue, Vanderaa is indeed growing a rapport with EFC fans.

Chasing the heavyweight interim title is a second heavyweight encounter, and almost certainly the proving ground for the division’s next contender.

Three time champion Andrew van Zyl returns to face England’s Stuart Austin. Both have suffered defeats to wily heavy and light heavyweight champion Dalcha, and in their combined loss have a personal point to prove. Their bout is a standout on the card, especially considering that chances are high it will be Van Zyl’s swansong before retirement.

Another former champion returns at EFC 76, this time Durban’s Dallas Jakobi, former EFC welterweight champion, will enter the Hexagon after a five year hiatus. He faces the dangerous Mark Kamba at midddleweight.

Opening the main card, the blistering knock out artist Conrad Seabi meets Brazil’s José Da Rocha. Da Rocha took the bout on short notice and poses a massive threat to Seabi, who has been ultra-confident throughout the fight week build up.

As befitting the final event of the year, the full EFC 76 card boasts exceptional bouts from beginning to end.

Johannesburg’s Roedie Roets takes on Port Elizabeth’s Sindile Manengela in a massively anticipated bout. Both men have electrified their division, and their paths finally cross in Pretoria.

The official EFC 76 weigh-in results are as follows: