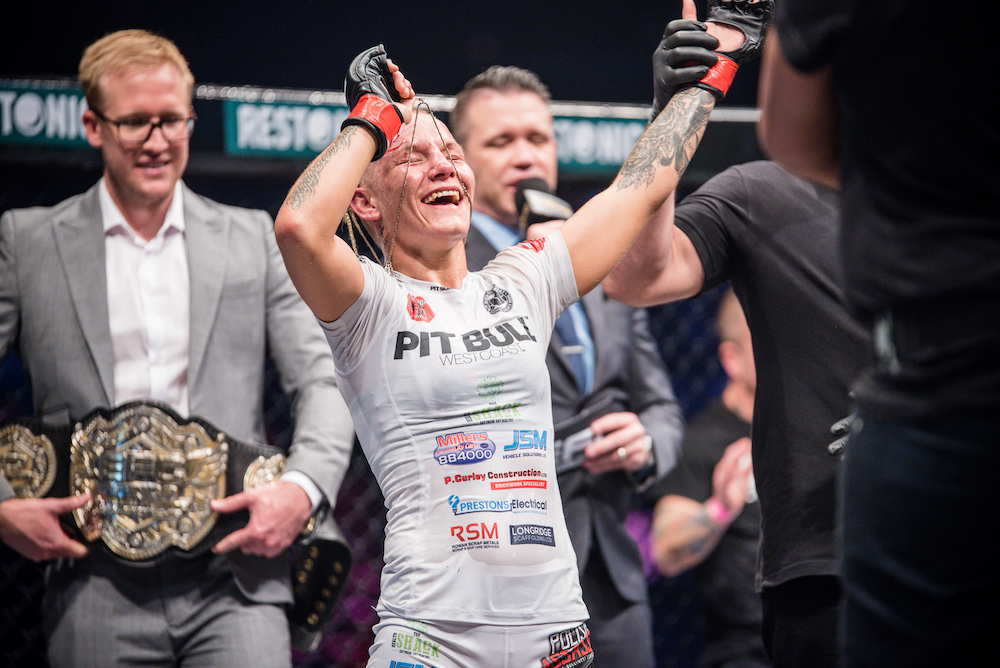 The night’s main event kicked off with a fascinating clash of styles, and an exhausting five round war between Penco and Wójcik. The Italian sat behind her jab, making use of superior range while Wójcik showed great movement to get inside, tagging the champion, but could not match Penco’s power.

While the first round seemed to go to Wójcik’s higher work rate and control, the second was more even with Penco bloodying her opponent, and after being taken down threatening with submissions. In the third round Wójcik revealed serious dominance in the pressure game against the fence, ultimately forcing the champion to pull guard, and once again looking very dangerous off of her back.

Going into the fifth there was no clear leader and their respective game plans took on an extra edge – Penco landing her big jab and adding knees to her arsenal, while Wójcik continued to dominate with control against the fence. The athletes ended in an exhausted heap, with the crowd applauding an absolute war.

The judges awarded Wójcik the title by split decision, setting up an obvious and eventual rematch between the Pole and previous opponent Cheyanne Vlismas, who had to withdraw from this fight due to illness.

Vanderaa came out controlled and tactical, striking from the outside and making use of position and dominance on the fence. In the second Vanderaa began to chip away at Potts’s stamina with an avalanche of knees to the body against the fence, and in the third his patient pressure paid off.

Vanderaa scored the takedown and unloaded with ground and pound, to which Potts struggled to his feet where he received more knees and punches from the American. Potts was swaying on his feet, and was saved by the referee.

Vanderaa takes the interim heavyweight title, and is now the man to beat in an increasingly competitive division.

Van Zyl came out steaming, landing a series of jabs and hooks, but soon Austin scored a takedown and took control with a dangerous crucifix and ground and pound, before silencing the arena with a knock out of a man who not only has never been knocked out, but never even knocked down.

Van Zyl is legendary both as a champion and as the man with the organisation’s toughest chin. Tonight it finally gave way, signaling the truth of a retirement that he announced at the post event press conference to emotional fans. Taking his place is a brutal new incarnation of the Englishman Austin.

“I want Potts, I don’t care who wins… easy money!” Austin roared, to which Potts answered after his loss to Vanderaa, “let that Englishman come.” Austin has put himself at the very top of the contender pile however, and his next opponent remains to be seen.

In a night full of highlights, former EFC welterweight champion Dallas Jakobi returned to the Hexagon after a five-year layoff, to the delight of the Pretoria crowd.

Jakobi was dropped by opponent Mark Kamba almost immediately, and amazingly survived a deep rear naked choke, to set up a grappling clinic of a first round.

The second saw both coast-based fighters suffering the effects of altitude. It was a haphazard but brutal round with both men trading haymakers, which ultimately left Kamba on his stool unable to come out for the third.

Jakobi scores a victory, and sent a reminder to both the welter and middleweight divisions of the grit and power of the former champ.

Seabi was running hot off a two-fight win streak, and had been dominating fight week build up with taunts to the Brazilian, but luck fell away from him just after the buzzer. Da Rocha landed a right hook dropping Seabi, and then followed with another felling punch that convinced referee Karagiannidis to call the fight in just 50 seconds.

The official EFC 76 results are as follows:

Marcel Els defeated Kabeya Amisi via tapout (armbar) 3:31 into round 1.

Devon Cronje defeated Orlando Mashaba via tapout (guillotine) 1:23 into round 1.

Justin Smith defeated Pietie Coxen via tapout (guillotine) 1:12 into round 1.

Dallas Jakobi defeated Mark Kamba via tapout (verbal submission) at the end of round 2.

Stuart Austin defeated Andrew Van Zyl via knock out 4:58 into round 1.

EFC now prepares for EFC 77 van Staden vs Cummins which is presented by Betxchange.com, and takes place on Saturday 16 March live from Time Square, Pretoria. Tickets will be on sale at computicket.com. Full broadcast details available on efcworldwide.com.