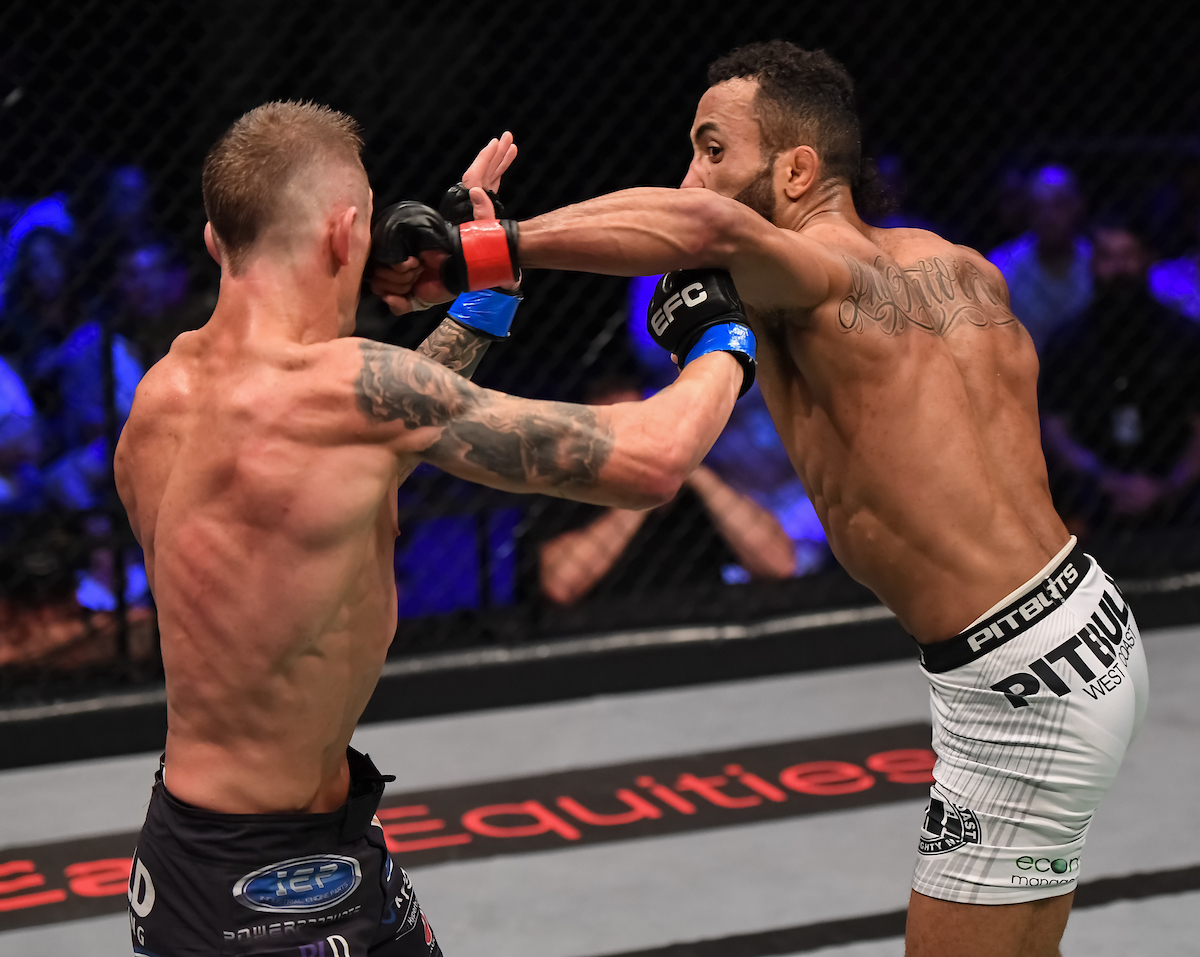 Pretoria, South Africa – EFC 77 was fought to a scintillating conclusion tonight, with the UK’s Joe Cummins (6-1) clinching the lightweight title in his decision victory over South Africa’s Martin Van Staden (26-12), and the USA’s Jared Vanderaa (9-3) defending his heavyweight title against the Congo’s Ricky Misholas (7-8) by TKO in the second round.

The night’s main event was a nail-biting five round encounter, with Cummins proving that the only way to fight (and beat) Van Staden, is extremely carefully.

While he did not shy away from stand-up exchanges, it was his impeccable performance in the wrestling and clinch arena that brought him the decision victory. Throughout the first four rounds he frustrated the former champion with lightning takedowns that shattered Van Staden’s rythym, forcing him to spend minutes fighting his way back to his feet.

Van Staden’s famously heavy hands were always a factor, and his desperation to derail Cummins’ wrestling onslaught grew round by round, so that by the fifth he was snapping the Brit’s head back at close quarters, but it was not enough to create the space he needed.

Cummins fought with skill, precision, and iron will, making no mistakes. Despite absorbing what seemed an illegal knee, and the curious decision to be stood up in the fourth, he takes the title and deservedly so. Cummins is the new force in the lightweight division.

“This is more than a world title,” said an emotional Cummins in his post fight interview, “it’s Karma. All this time I’ve been helping others, and finally it’s come back to me. Thank you to every person that has ever shared the mat with me.”

The arena shook with roars at the entrance of EFC heavyweight legend, Ricky Misholas, on his way to a title shot nearly a decade in the making. He faced the dangerous champion, the USA’s Jared Vanderaa, in his own first title defense.

Misholas’ evolution as an athlete was clear to see as he stood toe-to-toe with the champion, landing his trademark lighting jab throughout, but Vanderaa’s dominance was clear also. Each Misholas jab was answered with a stinging leg-kick, and Vanderaa’s work in the clinch had no answer from the man from the Congo.

Vanderaa’s pressure forced a crack in the second, with Misholas hitting the canvas and unable to answer a ground and pound barrage from Vanderaa.

While Vanderaa was deserving in victory, Misholas’ emotional devastation told the story of a giant of the sport, and the sport itself. Having faced incredible odds to establish himself as a fighter, business and family man in a foreign country, and having moulded himself into a beloved mixed martial artist through a rollercoaster of victories and defeats, Misholas shed tears in the Hexagon and promised a return to shouts of appreciation from the crowd.

Vanderaa’s laid-back style and open heart has secured him a special place in the minds of EFC fans, but tonight Misholas stole their heart.

A light heavyweight number one contender bout brought the mysterious Quinton Rossouw to the Hexagon for the first time in a year, to face New Zealand’s Shaw Dean.

Rossouw nearly caused his own defeat with a shoddy takedown attempt at the start of round one, gifting Dean the full mount position, but instead the bout opened up into an exciting grappling display.

Dean seemed to have the bout in the bag with dominant top control, pinning Rossouw to the canvas and landing heavy ground and pound, but the South African reversed and answered with a nail-biting rear-naked choke attempt.

Their back and forth had to come to an end, and it did in the closing seconds of the second round, when Rossouw secured a crucifix position and due to the sheer volume of punches, forced referee Swart to end the fight.

Rossouw moves into top contender status, but instead of looking ahead took a moment to congratulate his worthy adversary. “Shaw, I love you,” he said, “thank you for an amazing fight.”

The legendary Alain ‘Commander Boy’ Ilunga returned to the Hexagon after a near two-year hiatus, and put on a spectacular bout with the absolute tank from Poland, Łukasz Świrydowicz.

Ilunga revealed a vastly improved all round game, with sensational reverses and takedowns against the fence, along with all the power and precision of his old striking game.

Świrydowicz was a threatening opponent, stifling the striker’s range with constant pressure and clinch work, but losing the crucial moments that ultimately brought Ilunga the victory – most tellingly a takedown against the fence, allowing Ilunga to dominate with ground and pound, decisively winning the third round.

Ilunga is certainly back, and he is calling for a shot at countryman Gunther Kalunda’s middleweight strap.

‘The Rage’ Gordon Roodman welcomed Cape Town’s rising star Justin Smith to Pretoria in the night’s main card opener. He delivered a few telling blows to an equally storming Smith in the opening exchanges, before two illegal elbows to the back of the head by Smith forced a medical stoppage.

Smith suffers a DQ loss for intentional illegal strikes, his first defeat as a professional.

The evening’s final undercard bout delivered a potential KO of the year. Hot on the heels of Mzwandi Hlongwa’s ‘hellbow’ of 2018, Johannesburg’s Pierre Botha folded fellow Highvelder Roedie Roets into the canvas with a perfectly placed left hook, ending the fight in the first round.

Fight of the night was awarded to the welterweight clash between Alain Ilunga and  Łukasz Świrydowicz. Performance bonuses went to Asiashu Tshitamba, Tumisang Madiba and Pierre Botha.

The official EFC 77 results are as follows:

Trezegeut Kanyinda defeated Benjamin Mangala via TKO (Punches) 0:55 into round 2.

Marcel Els defeated Nerick Simoes via tapout due to strikes (punches) 2:03 into round 1.

Pierre Botha defeated Roedie Roets via KO 0:33 into round 1.
Gordon Roodman defeats Justin Smith via disqualification in round 1.

Quinton Rossouw defeated Shaw Dean via TKO (punches) 4:31 into round 2.

EFC 78 Buys vs Biko, Zulu vs Hadley is presented by Restonic Mattresses and takes place on Saturday 13 April live from GrandWest, Cape Town. Tickets are on sale soon at computicket.com. Full broadcast details available on efcworldwide.com.