‘THE PUNISHER’ ON WEIGHT & READY FOR CUMMINS 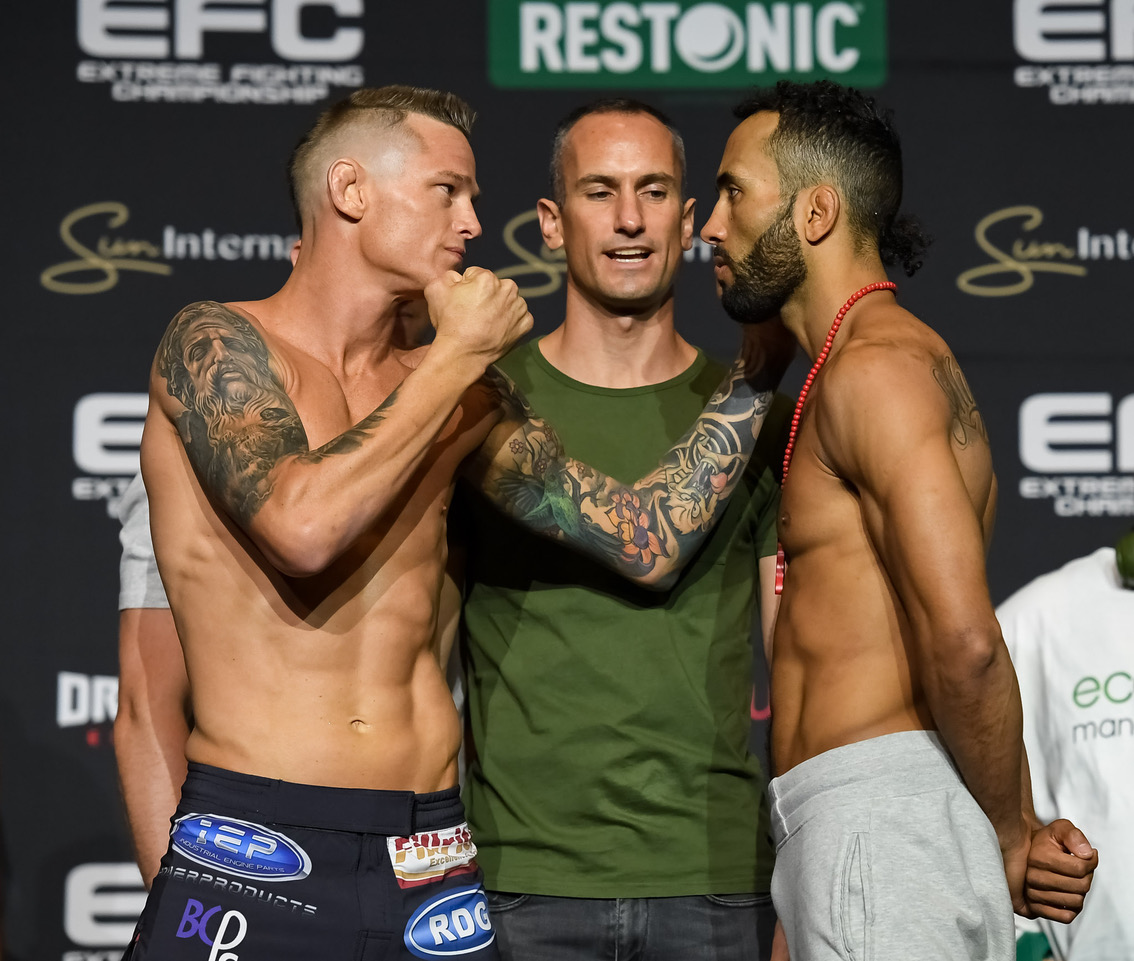 For Van Staden, one of the organisation’s most decorated athletes, it’s about redemption. After having lost the belt to America’s Mazany in what he sees as a controversial decision last year, he is more than motivated to get it back.

“There are levels to this, and I’m going to show that,” he said after hitting a perfect 154lbs lightweight mark. “I’m excited, there’s going to be fireworks… I will win by KO tomorrow night.”

England’s Cummins is no less motivated. A hugely successful coach for the last decade, he has finally thrown his lot fully into the role of fighter, and seeks validation for his commitment.

“This is my first fight training full time,” said the devastating striker after hitting his own on-the-money mark of 154.2lbs. “If they were worried about me then, they need to worry about me now!”

Van Staden has been vocal about his belief that the title belongs in South Africa, and showed it with an intense staredown against his challenger. With 9 TKO victories to his name his prediction of fireworks is likely.

In the co-main event, America’s Jared Vanderaa defends his now unified heavyweight strap for the first time. Ever the joker outside of the Hexagon and the relentless warrior inside of it, his words to Misholas were full of that mix.

Misholas was far more serious. Refusing to shake the hand of the American, instead he delivered words to the Pretoria crowd.

Both men made the heavyweight weight bracket, but Vanderaa carries a significant 19lbs advantage over the man from the Congo.

Barring the former champ Van Staden, the Pretoria crowd’s heart clearly beats for the legendary Alain Ilunga, who makes his Hexagon return after nearly two years tomorrow night. Facing Cummins’ UK based teammate, the Polish Lukasz Swirydowicz, ‘Commander Boy’ wasted no time by getting in the face of his opponent.

Ilunga’s walk-off-spinning-back-kick KO against Nienaber at his second-last outing has not been forgotten. Tomorrow night he aims to add to a world renowned highlight reel.

Pretoria’s own Gordon Roodman experienced a tough weight cut and came in 3lbs over the 185lbs middleweight limit. Earlier today rising star, Cape Town’s Justin Smith, stated: “If Gordon is walking in like that, I am gonna drop him in the first.” He took the same fire into their face-off, clearly ready to stand toe-to-toe with the stalwart Roodman in the opening fight of the main card.

Pretoria’s Gordon Roodman was the only athlete to miss weight. He suffers a financial penalty.

The official EFC 77 weigh-in results are as follows: