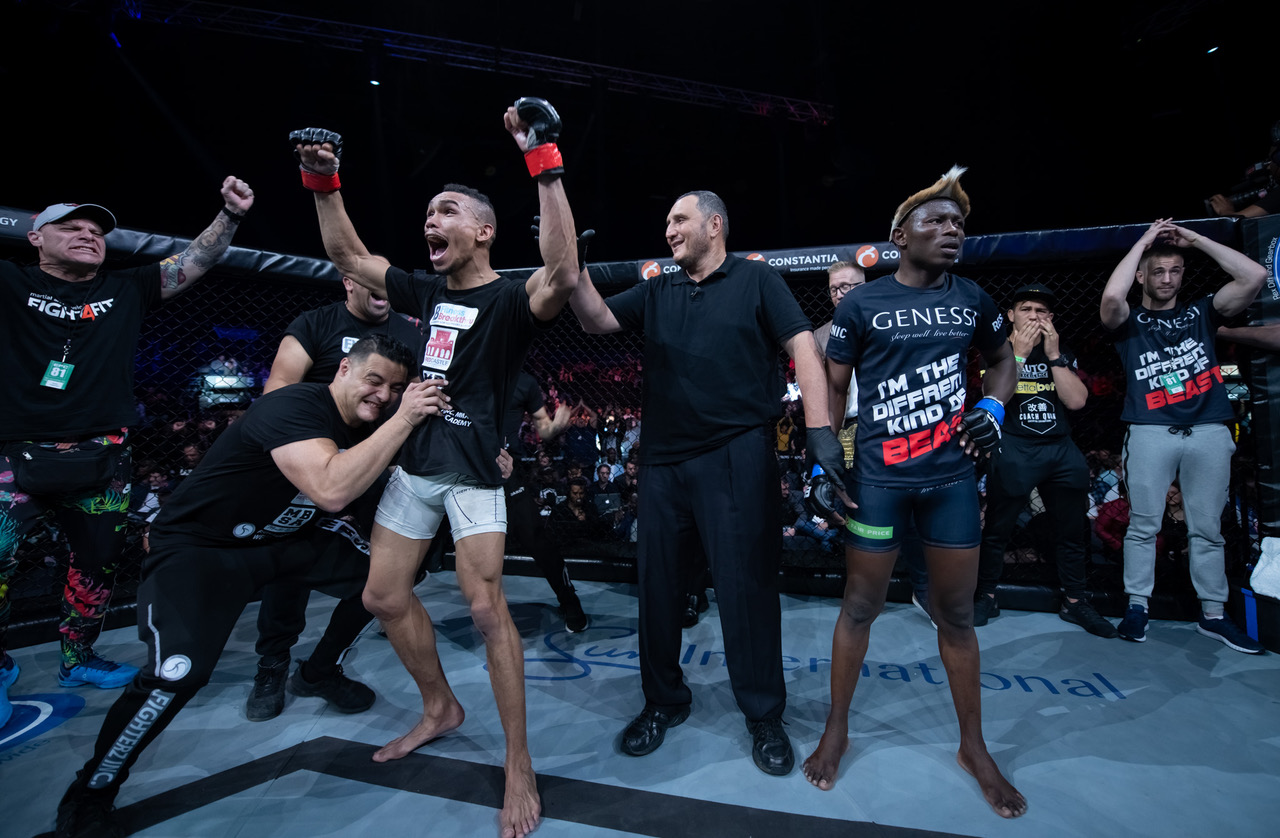 The night’s main event was a nail-biting five round encounter, with Jacobs proving to the world he can walk-the-walk along with talking-the-talk with a diverse and ever growing skill set.

Over five rounds, he went toe-to-toe with the former champ. Trading punches and kicks while adding his own personal flair. When Zulu decided to change tactics and take Jacobs down, an answer was always found. Ultimately always getting back to his feet.

In the end, it was Jacobs claiming the nod from the judges. “I can’t describe how this feels”, Jacobs responded in his post fight interview. In a motivating speech, Jacobs went on to conclude, “Whenever a teacher tells you, you won’t be anything, or you can’t do something; tell them ‘Troublemaker’ says dreams come true!”

In the penultimate bout of the evening, perennial contenders Tumisang Madiba and Pierre Botha faced-off. With a powerful right, reminiscent of his most recent KO win, he dropped Madiba and pressed forward with follow up strikes on the grounded Madiba. Referee Bobby Karagiannidis stepped in, calling the end of the bout. Madiba popped up, contending the decision immediately, and later calling for a rematch.

Two of the most experienced athletes in the organisation put it all on the line tonight. Former welterweight champ, Dino Bagattin battled, now 21 EFC fight veteran, Anicet Kanyeba over three rounds. The underdog Kanyeba’s victory was made that more impressive by his stepping in on a week’s notice and up a division from his usual lightweight category. This victory only strengthens his case for a shot at EFC gold.

Undefeated prospect, Lyle Karam, furthered his winning streak to 5 in a row with his competitive back and forth fight against Stefan Pretorius. Launching up the ranks as a future welterweight contender. He will be watching the Grand Prix finale on 28 September between Themba Gorimbo and Luke Michael closely.

Opening the fight with fireworks, saw bantamweight contenders Asiashu Tshitamba and Billy Oosthuizen clash. Surviving and seemingly returning from the dead in the first from a Rear-Naked Choke by Oosthuizen, Tshitamba KO’ed Oosthuizen with an up-kick that sent Oosthuizen collapsing over himself to the canvas. This was Tshitamba’s 4th straight win, and he used the moment to call for a shot at the winner between the night’s main event.

The prelim headliner between Takunda Gorimbo and Mzamo Madlopha was cancelled. Gorimbo was not medically cleared by EFC medical officials.

Fight of the night was awarded to the welterweight clash between Dino Bagattin and Anicet Kanyeba. Performance bonuses went to Asiashu Tshitamba, Billy Oosthuizen, Lyle Karam and Stefan Pretorius.

The EFC 81 results are as follows:

All eyes now turn to EFC 82 Gorimbo vs Michael, Drotschie vs Rossouw, presented by Restonic, which is taking place on Saturday 28 September, live from Carnival City, Johannesburg. Tickets are on sale soon at computicket.com. Full broadcast details available on efcworldwide.com.