JACOBS OUT TO MANIFEST DESTINY AGAINST ZULU 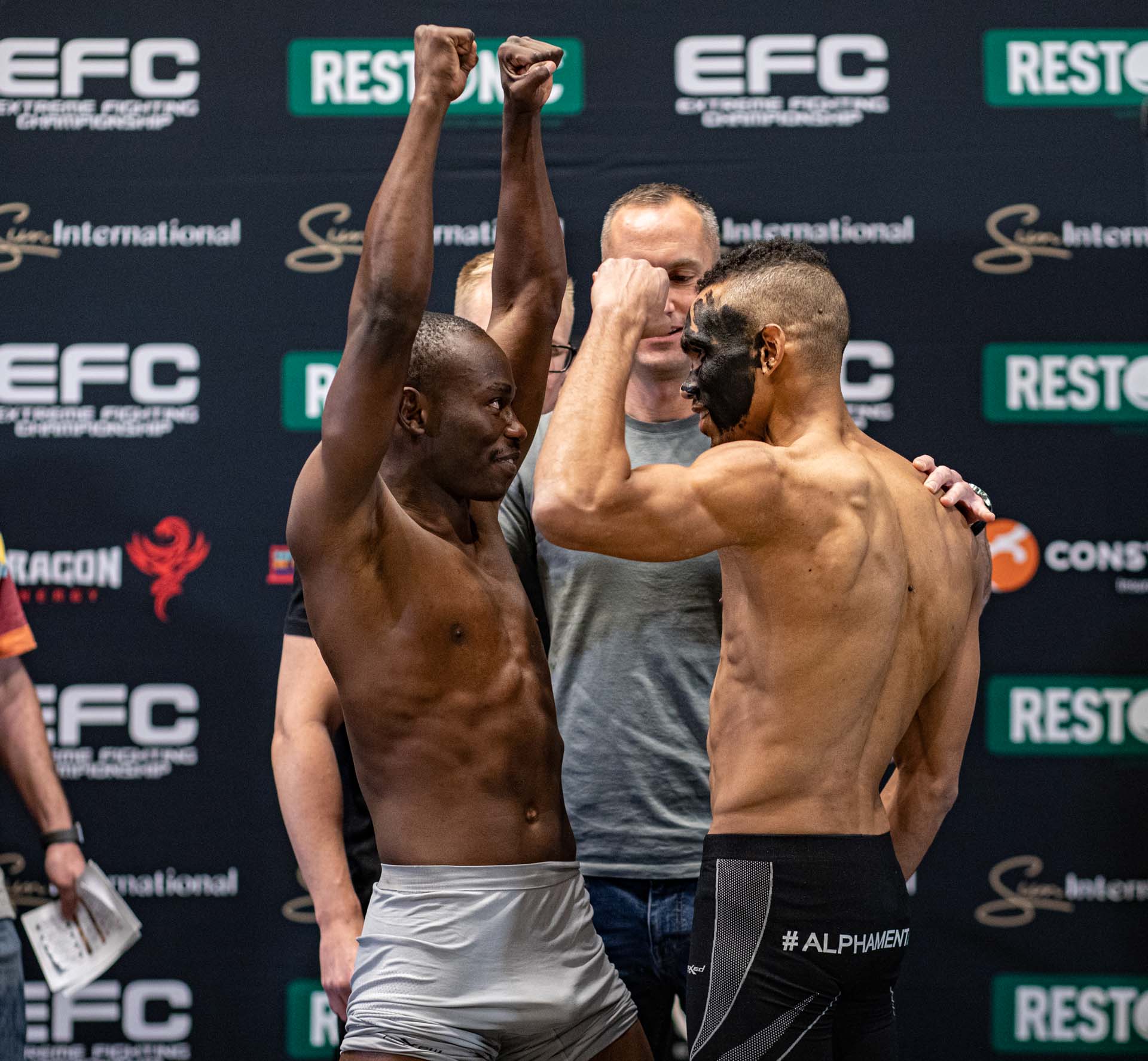 Pretoria, South Africa – The official EFC 81 weigh-in took place this morning in front of a boisterous crowd at the EFC Performance Institute, Johannesburg. The former champ, Nkazimulo Zulu (11-3), looks to reclaim EFC gold when he faces No.1 contender Faeez Jacobs (6-2) for the interim EFC bantamweight championship.

For the former flyweight champ, ‘Zulu Boy’, it is about reclaiming gold and reasserting himself as one of the best to have ever stepped inside the Hexagon.

“Let’s not talk about the loss,” started Zulu. “I am here to win. I am here to get this title back to where it belongs, with me.”

Jacobs is incredibly fired up for his first championship bout, as he sets out to manifest what he perceives to be his destiny.

“I have been putting everything into this,” Jacobs confidently stated. When the fight was announced, I was in the gym an hour later. I have taken no shortcuts. The belt is coming home with me tomorrow!”

In the penultimate fight of EFC 81, the electrifying Tumisang Madiba rematches wrestling specialist turned KO artist, Pierre Botha. While Madiba looks to repeat his superb finish from their first encounter which took place over half a decade ago, Botha will be hungry for vengeance, especially with a potential title fight hanging in the balance.

South African MMA legend, Dino Bagattin makes his return to the EFC Hexagon for the first time in over a year. A former champ, that fought all the way back at EFC 01 is determined to put on a performance for the fans and his son in particular, who will be in the crowd watching his fight for the first time. He faces the formidable Anicet Kanyeba, an athlete carrying massive momentum as he looks to earn his very first title shot as he competes in the Hexagon for the 21st time this Saturday.

South African undefeated prospect, Lyle Karam, returns from Australia as he looks for his 5th straight win when he faces the powerful Stefan Pretorius. Incredible hype accompanies young Karam, as he is expected to follow in his former teammate, Dricus du Plessis’s footsteps. Meanwhile, Pretorius is out to crash the welcome-back party and throw his own name into the middleweight title conversation.

Set to open the main card with high-paced action are surging prospects Asiashu Tshitamba and Billy Oosthuizen. Tshitamba is riding an impressive three-fight win streak and many pundits rightly see him as the next bantamweight contender. But he faces a dangerous challenge in KO artist Oosthuizen who boasts a 100% finish rate.

The main card is preceded by six exhilarating prelim bouts featuring a mix of EFC’s rising stars and prospects. Female flyweights, Christine Wolmarans & Paulwetu Namba, take centre stage on Saturday night on the prelims. This fight takes place during Women’s Month, a day after National Women’s Day and what better way to celebrate than watching two of the most exciting female MMA prospects on the African continent throw down.

Robert Swanepoel and Paulwetu Namba initially failed to make weight. Swanepoel accepted a financial penalty and Namba made the 125lbs limit in the 2 hour allowance.