Zimbabwe and Cameroon get their first ever MMA world champions 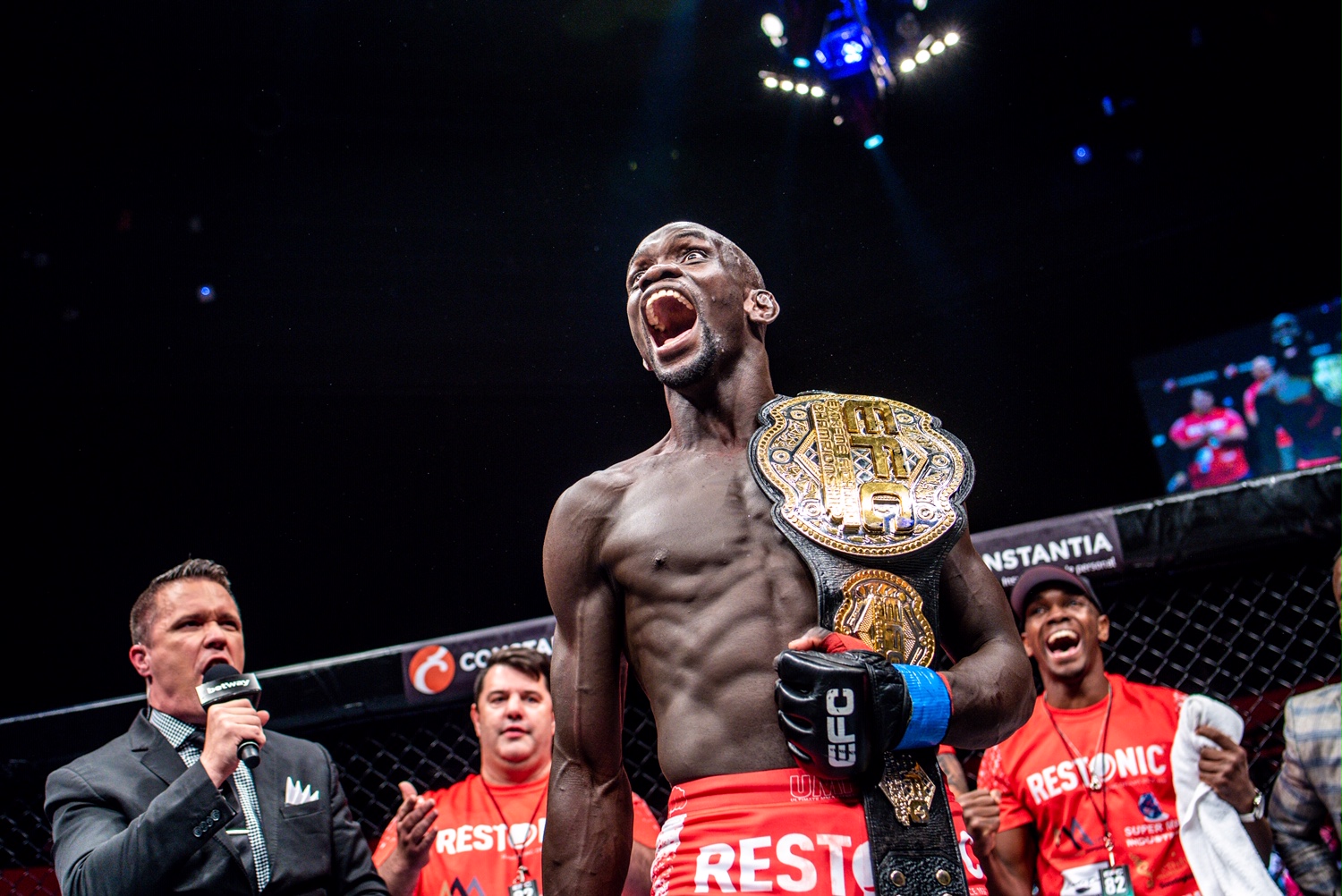 Johannesburg, South Africa – Carnival City played host to the ever-boisterous crowd at the EFC 82 event tonight, where African history was made. Zimbabwe’s Themba Gorimbo (8-3) and Cameroon’s Simon Biyong (6-1) both claimed gold to be named EFC champions in the welterweight and light heavyweight, respectively.

It was in March this year when the EFC welterweight Grand Prix was first announced between 4 of the division’s best: Themba Gorimbo, Luke Michael, Jose Da Rocha and Conrad Seabi.

Over several events, the tournament unfolded. Gorimbo defeated Da Rocha over three gruelling rounds. And, after two postponements, Michael was named the one to progress to the finals after Seabi failed to make weight.

It took only minutes for Gorimbo to land a destructive right hook that cut Michael deeply, above his eyebrow.  With the fight nearly being called off, Michael charged for another takedown after the restart, but Gorimbo was smart and ruthless, sprawling, spinning to Michael’s back and laying down intense ground and pound until the referee stepped in and called it.

A jubilant Gorimbo celebrated and then called out the UFC welterweight champion. “Dana White, Kamara Usman is no African. He left when he was 6 years old. Sign me and let me run the division.”

In the co-main event, Biyong showed his mettle to weather the initial submission attempts by Rossouw. In the first minute of the second round, Biyong mounted Rossouw and landed a series of elbows that left the South African unconscious.

A fight that was closely watched by the bantamweight champ Faeez Jacobs, saw former champ Luthando Biko take on Tumisang Madiba. Over three rounds, Biko emerged victorious having stamped his name as the most likely to be next to contend for the belt.

Undefeated light heavyweight prospect, Zaakir Badat returned to the Hexagon in spectacular fashion when he took on Stefan Pretorius. After an initial miscalculation on the feet, Badat took the fight down, entered a leg entanglement and submitted Pretorius via Heelhook. A rarely seen submission in the sport of MMA.

Opening the main card saw two veterans of the sport collide. Former champ Dino Bagattin faced Pietie Coxen. However, the ‘Fight of the Night’ expectation placed upon the bout was not to be. After taking Coxen down, Bagattin’s temple collided with Coxen’s jaw. Coxen claimed a head-butt, an illegal technique, and was given five minutes to recover. However, the fight was ultimate ruled a’ ‘No Contest’.

Bagattin stated in his post fight interview,” I was going to retire tonight, but he robbed me of that. I will just have to do it one more time.”

The official EFC 82 results are as follows:

Juan Bezuidenhout defeated Simon Harle via knockout (punches) 3:37 in round 2.

Tommy Strydom defeated Warren Richards via TKO (punches) 3:56 in round 2.

Dino Bagattin vs Pietie Coxen was ruled a No Contest.

Simon Biyong defeated Quinton Rossouw via knockout (1:34) in round 2.

Themba Gorimbo defeated Luke Michael via TKO 2:48 in round 1.

All eyes now turn to EFC 83 De Plessis vs Lesar presented by Betway, which takes place on Saturday 14 December live from Time Square, Menlyn Maine, Pretoria. Tickets will be on sale soon at www.computicket.com. Full broadcast details available on efcworldwide.com.