MORE FUEL TO THE FIRE 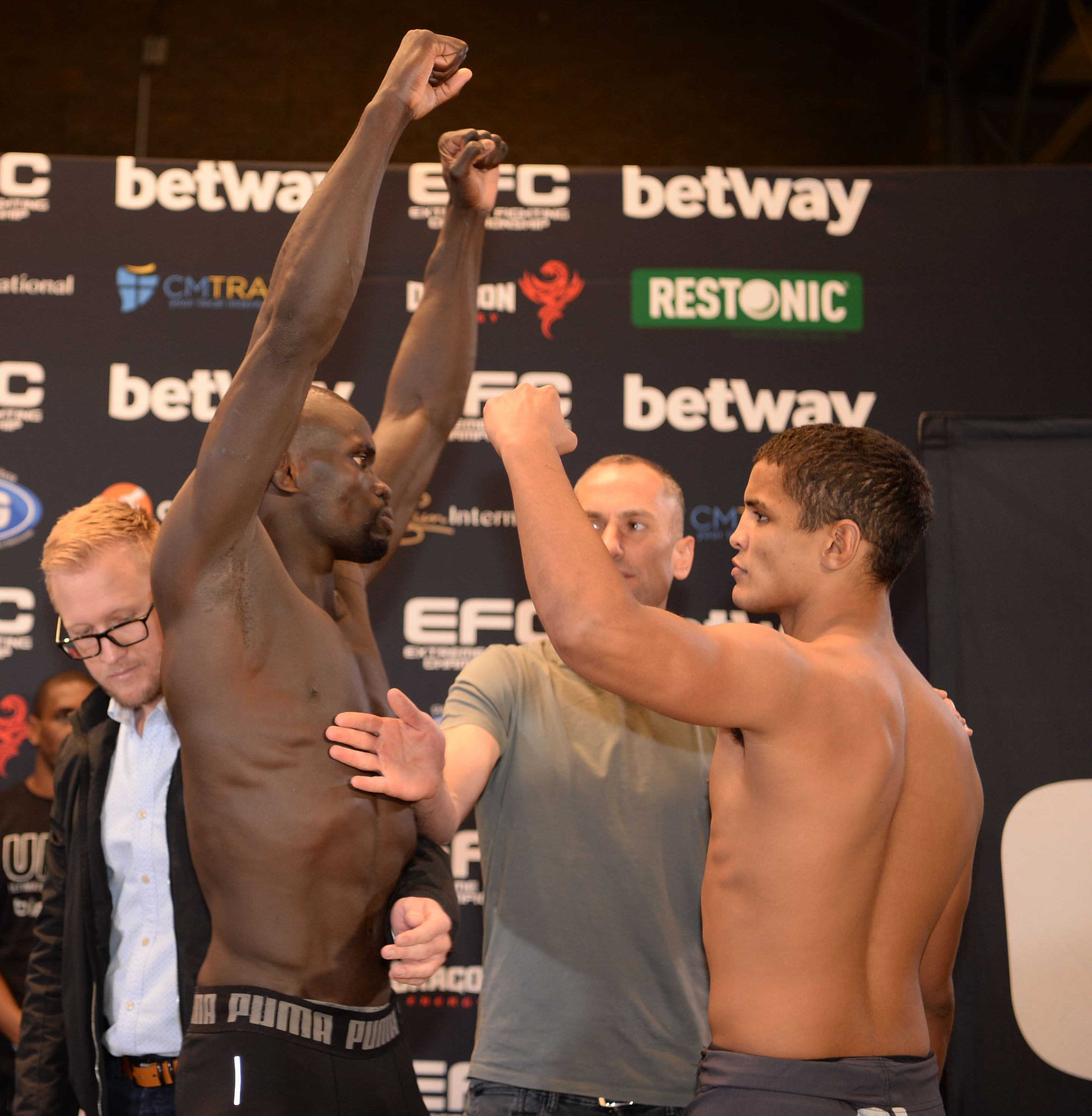 For a fired-up Gorimbo, it is about realizing a dream and becoming the first ever Zimbabwean champion. With Michael coming over the designated weight division, Gorimbo was even more heated than his typical self.

“Tomorrow I will be smart, quick and ruthless. I want to kill him!”, responded Gorimbo in his interview.

Michael’s confidence beaming through, he is on the verge of proving the doubters wrong and defying the odds. After a change in training camp from Johannesburg back to his home city in Cape Town.

“I am incredibly ready for tomorrow. Expect fireworks, my journey got me to this point and tomorrow I will take EFC gold!”, Michael claimed.

However, Michael failed to make weight in the given extra time, missing the mark by ½ a pound. In a video on social media, EFC VP talent explained, “The curse of the welterweight title continues. If Themba wins, he gets the title. If Luke wins, he gets shuffled back to the No.1 contender spot.”

In the penultimate fight of the evening, two men looking to create their own legacies in Rossouw and Biyong take centre stage. Rossouw is holding the flag for the ‘every man’, who works a full time job and finds time to train when he can. Excelling way beyond expectations.

“I am so ready, I can’t wait to fight tomorrow night!’, joyously shouted Rossouw.

However, Biyong has delved deeply into the professional athlete lifestyle since discovering the sport of MMA only two years ago. Training full time and painting as an outlet and secondary career.

“I am more than prepared and can’t wait to perform. Let’s go!”, shouted Biyong.

Both light heavyweights made weight and set the stage for ‘The Lion Slayer’ versus ‘The Heart of a Lion’.

With their eyes firmly set on the bantamweight champion, Faeez Jacobs, former champ Luthando Biko and the ever exhilarating Tumisang Madiba are set to collide with a potential title shot hanging in the balance. While respectful in their face-off, their ultimate intent and hunger for victory could be felt when they stood face-to-face. Madiba failed to make weight within the allotted time. He suffers a financial penalty.

Johannesburg’s Stefan Pretorius returns to action, this time at light heavyweight against the highly touted Durban prospect, Zaakir Badat. With just one fight in the organisation, Badat has stamped his authority on the division, with aims dead set on claiming EFC gold. However, he has the hardened Pretorius to get through first.

Kicking-off the main card broadcast sees two veterans of the sport go head-to-head in what is anticipated to end in fireworks. Former champ, Dino Bagattin looks to cement his legacy as one of the best to have ever stepped in the Hexagon as he reaches the end of his eventful career. Meanwhile, Pietie Coxen is out for a spectacular KO finish and elevate his name into the title talks conversation.

The official EFC 82 weigh-in results are as follows:

EFC 82 Gorimbo vs Michael, Rossouw vs Biyong is presented by Betway and takes place on Saturday 28 September, live from Carnival City, Johannesburg. Tickets are on sale at www.computicket.com. Full broadcast details available at www.efcworldwide.com.