A DECADE OF DESIRE, TO GREATEST! 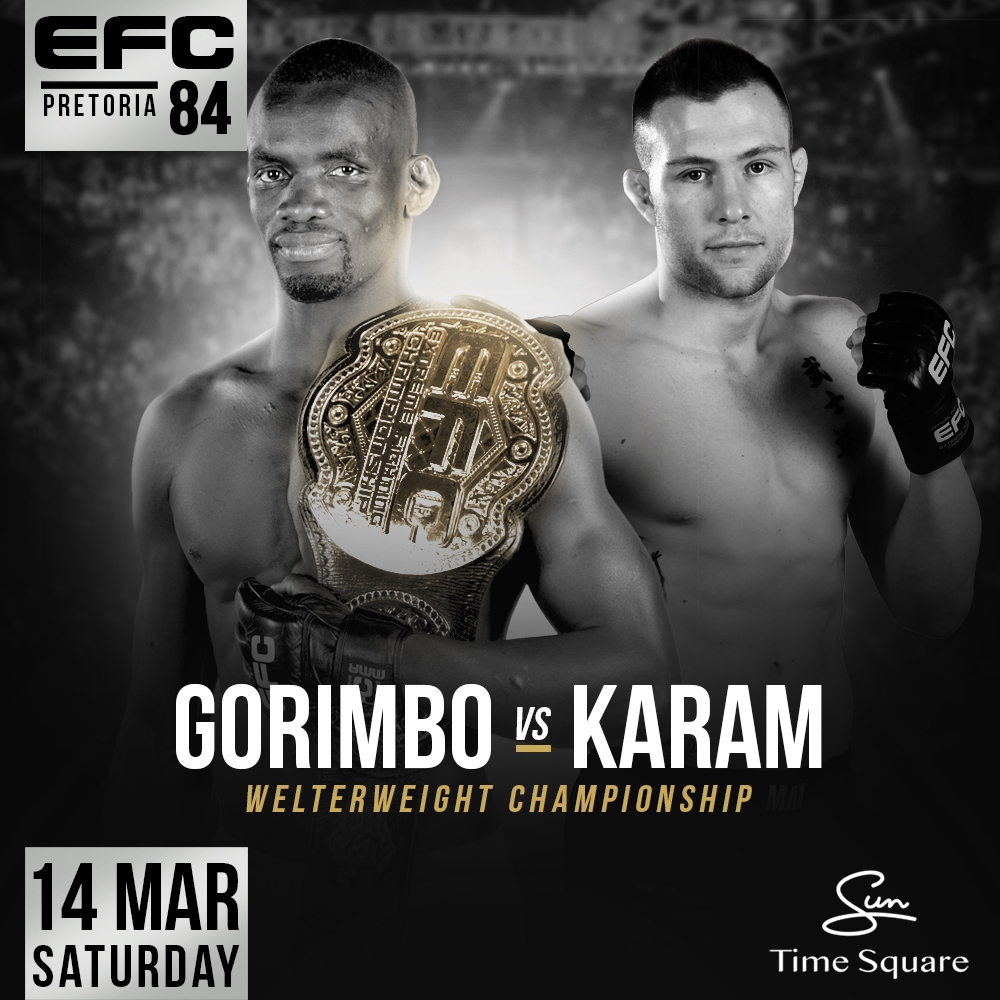 Pretoria, South Africa – The undeniably in your face, Themba Gorimbo, has along with EFC management, weighed-up a perennial pack of welterweight contenders over the last week and decided that undefeated master of mayhem, Lyle Karam will be the first contender to challenge Gorimbo in his first title defence. EFC 84 is set kick-off 2020 season on Saturday 14 March at Time Square, PTA.

A new year always brings revitalised goals and ambitions, athletes claw at their gap for greatness, as the clock strikes 12. Gorimbo is both a part of this pack and yet identifies as an outlier. Having not taken his foot off career campaigning for one second since he wrapped the coveted EFC belt around his waist. He has made UFC shout outs to fight call outs.

He has over a decade of pushing through adversity, that very few will ever know and has proven that anything is possible. He consostantly visualizes his hand being raised against the greatest and the most threatening, that now includes the young undefeated dynamo, Lyle Karam.

In September of last year, Gorimbo made MMA history by becoming the first ever Zimbabwean MMA world champion. In the EFC Welterweight Grand Prix finale, he dismantled his opponent to claim gold and named himself the king of the division, yet he is still to defend his crown, the mark of a tried and tested champion.

He is a man with singular focus, eyes firmly set on becoming one of the greatest to ever have fought in the Hex. He intends to propel himself to the MMA hall of fame, through systematic challenging, visualizing and dispatching of any athlete blocking that proposed reality.

“I wanna fight the best guy that is available right now,” recently stated Gorimbo. “Lyle Karam is undefeated and has been fighting in Australia as well, so he is the best opponent for me to beat. The rest still need to earn their shots!”

Karam, a focused storm, a young phenom still working on breaking down the doors to the MMA main stage. With this contender challenge, he has been given a golden key.

He first joined the organisation as a youngster, a local to Fourways traveling to Pretoria daily to ardous training sessions with Dricusdu Plessis and the CIT team. An accomplished boxe,r he began building his EFC reputation, running through his opponents and putting his name into the zeitgeist with an impressive 4-fight win streak with many declaring him as the next du Plessis.

However, tragedy struck and the local Fourways boy decided to take some time off and made the move to Australia and joined one of their premium world-renowned teams, Absolute MMA. A team best known for their superstar list of submission artists, such as Lachlan Gilles and Craig Jones.

After a 3-year hiatus from competition, but amassing an internationally forged MMA skill set, Karam returned to action in the EFC Hex October last year.

With a fight of the night performance under his belt and his hand raised in victory, Karam had truly announced himself as a top contender in the stacked welterweight division. He wasn’t done with the year however, taking another fight in Australia at AFC, a promotion know for building the likes of Israel Adesanya, the hungry Karam emerged victorious yet again. Putting him at a super impressive, blemish free, 6-0 record.

“I am going to bring something that Themba has never seen,” responded Karam. Revealing his intention to maul Gorimbo into defeated, “I am gonna drag him down to the mat and beat him until he quits.”

EFC 84 Gorimbo vs Karam is presented by Betway, which is taking place on Saturday 14 March, live from Time Square, Pretoria. Tickets are on sale soon at computicket.com. Full broadcast details available on efcworldwide.com.