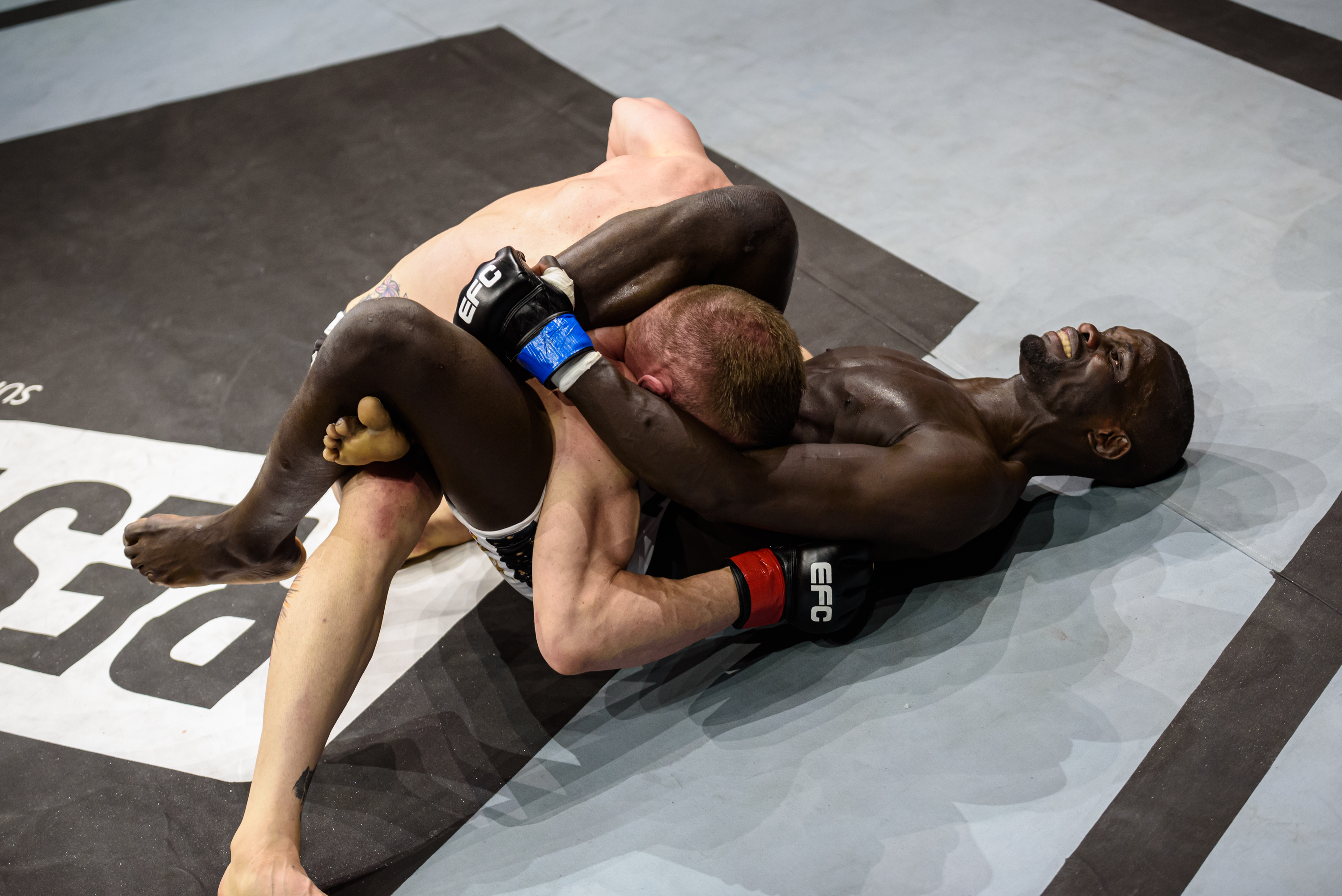 Pretoria, South Africa – The first EFC event of 2020 kicked-off at Time Square, Pretoria earlier this evening in front of an embedded crowd. Zimbabwe’s Themba Gorimbo (9-2) put his EFC welterweight title on the line against the now formerly undefeated challenger from Australia, Lyle Karam (6-1).

In the first stanza, Gorimbo controlled the action with leg and head kicks until Karam found a chink in his armour and wobbled the champ. Gorimbo in his wiley ways shot the double leg in a follow up flurry from Karam and ended in a neck breaking guillotine choke. With his self-proclaimed ‘Mamba Mentality’ he worked his way out to end the round on top.

The second round began in a hurry, with Karam getting the take down this time and ending in a vulnerable position. Gorimbo slowly synched up the  triangle choke to seal the deal and continue his reign as the welterweight champion.

“For Africa to be recognized in this sport, it needs a real African,” bellowed the champ on the mic after the fight. “Someone that has survived Africa.”

In the penultimate bout of the evening, ever present contender, Anicet Kanyeba put the pace on former contender, Pierre Botha. While Botha utilized his wrestling with big suplexes in the first round, Kanyeba ran away with his striking to claim a dominant win, his fifth in a row.

Pretoria’s own, Niel du Plessis entered the Hexagon tonight in a new light heavyweight division to face Stefan Pretorius. However, it was Pretorius to walk away celebrating with a controversial submission win in the second round.

In the Fight of the Night, Tshilumba Mukishi took on August Kayambala in an all out war. While it seemed Kayambala was on the verge of finishing Mukushi, roles reversed quick when a slick uppercut dropped the prospect, Kayambala, to give Mukishi his 4th straight win in the lightweight division.

The opening bout of the main card saw Roevan de Beer take on Judo blackbelt, Sindile Manengela. In almost one way traffic, Manengela announced himself in his new bantamweight division to claim the first round finish.

Fight of the Night was awarded to Tshilumba Mukishi vs August Kayambala, and performance bonuses were given to Cameron Saaiman, Cole Henning, Pierre Botha and Anicet Kanyeba.

The official EFC 84 results are as follows:

Roy Lokolo vs JT Botha was  cancelled due to injury in warm up.

Cameron Saaiman defeated Zwelebanzi Ngema via TKO (punches) 3:29 in round 2.

Cole Henning defeated Rodrique Kena via knockout (punches) 3:21 in round 1.

All eyes now turn to EFC 85 and is presented by Restonic and takes place on Saturday 4 April, live from GrandWest, Cape Town. Tickets are on sale soon at www.computicket.com. Full broadcast details available at www.efcworldwide.com.