IT ALL GOES DOWN THIS SATURDAY! 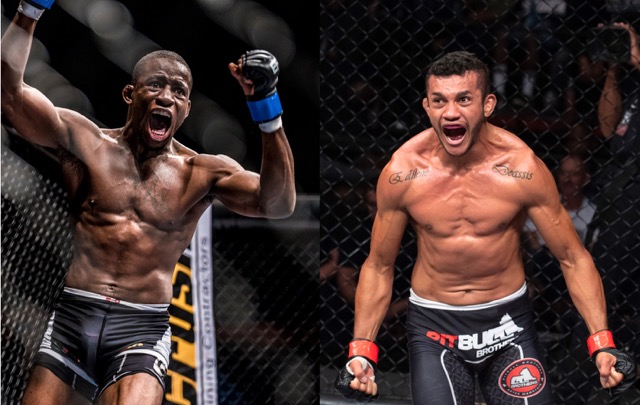 Johannesburg, South Africa – EFC featherweight king, Igeu Kabesa returns to the Hexagon this Saturday for the first time in over two years. The wrestling powerhouse, turned knock-out artist puts his 145 pound title on the hook against the Brazilian warrior, Reinaldo Ekson.

Brazil’s Ekson, entered EFC submitting Tumisang Madiba in an incredible debut performance and is looking to claim his fifth straight win and EFC gold in the process.

The dominant champion with goals to gather titles from the biggest organisations in the world has recently come off emphatic wins against opponents from across the globe; South Africa, Brazil, Scotland and Croatia. He now faces another South American threat and another threat to his global aspirations.

The challenger enters the bout with 50% more MMA fight experience behind him than the champion and after last competing on the same fight card as Kabesa, he now competes in the same fight.

In the highly anticipated co-main event, Alain Ilunga goes head-to-head with Anicet Kanyeba for the interim lightweight title. With the champion, Joe Cummins unable to travel freely due to COVID 19 restrictions he’s been forced to decline a fight at this time, but with two challengers holding a combined 12 fight win streak between them, the divisional hierarchy   continues.

EFC 86, Kabesa vs Ekson, is presented by Restonic and takes place on Saturday 12 June 2021 live from the EFC Performance Institute in JHB, South Africa (No spectators due to COVID 19 government restrictions).