FINAL EVENT OF THE YEAR COULDN’T BE ANY BIGGER 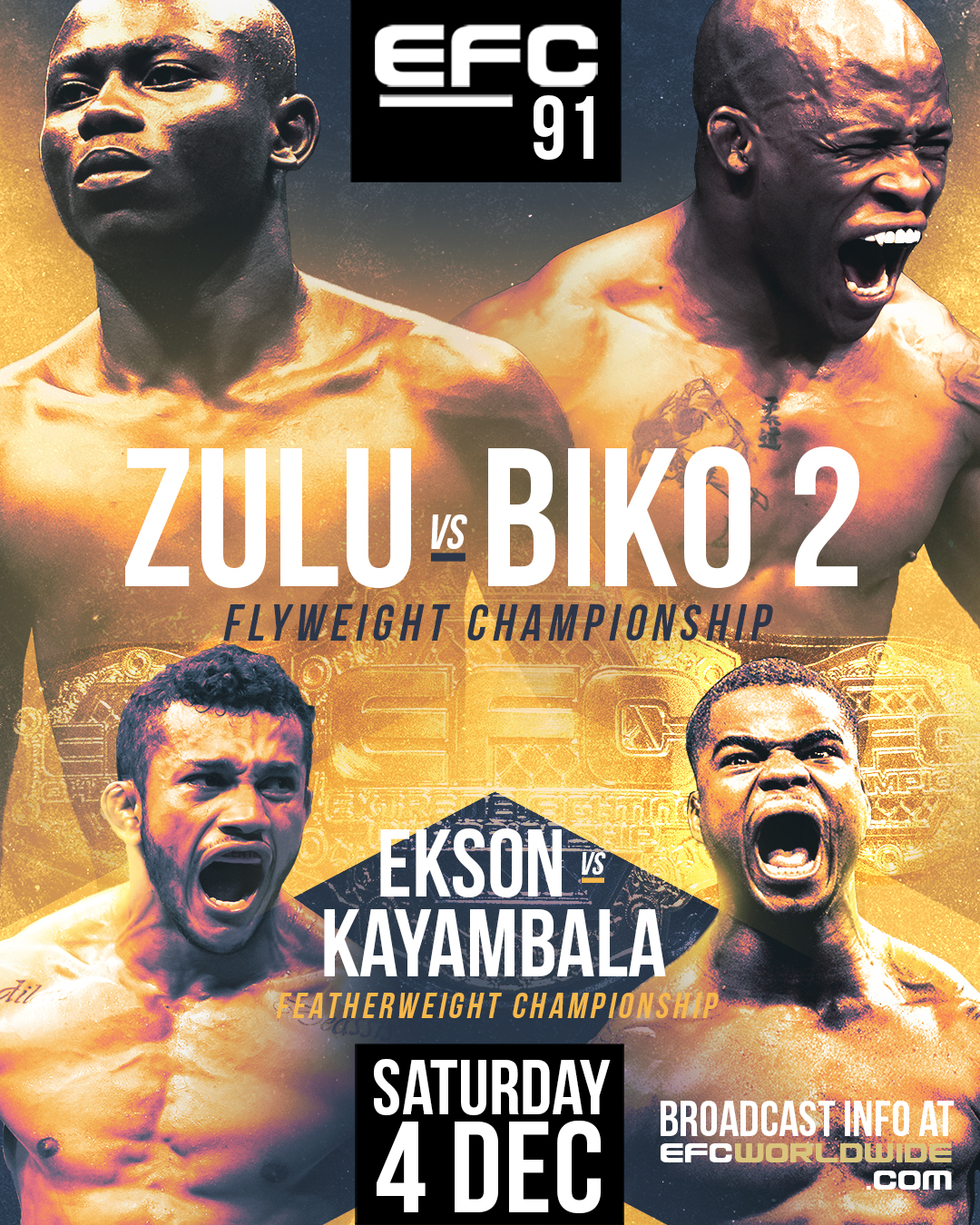 With 29 professional MMA fights between them, competitive countrymen turned bitter rivals, Nkazimulo Zulu the king of the strikers, and Luthando Biko the infamous Judoka, are set to meet once again, and this time not just with the title on the line but with revenge and resolution on their minds.

The pair go head-to-head in a highly contentious rematch at EFC 91 on Saturday 4 December for the vacant EFC flyweight championship of the world.

Their previous championship outing was shrouded in controversy. Zulu missed weight, collapsing behind the scenes and was ineligible to contend for the belt, and Biko, under protest about the official weigh-in circumstances, continued with the bout nonetheless and continued his quest for EFC gold.

The bout ended with Zulu going on to claim the victory but not the title, and Biko claiming foul play and winning with the insistence of another battle.

The contentious rematch has been set and in the final EFC fight card of the year, the two former champions, both who have made it the top of the podium on multiple occasions, in multiple disciplines, will stand face-to-face in the hexagon, and they will be there until the fierce end.

In the co-main event, the ‘Guerreiro’ (warrior) from Brazil, Reinaldo Ekson returns to African shores to defend his EFC strap against the continents most dangerous Barista, DRC’s August Kayambala.

After putting a stop to the relentless reign of Igeu Kabesa, Ekson launched his name into the record books and that is exactly what August will be looking to do in this fight.

In a hard fought battle of wills ‘The Barista’ from the DRC secured a title shot by defeating one of the most notorious fighters in the division but he will need to bring more to the hexagon than he did previously if he is to dethrone this South American warrior king.

Can the Brazilian Guerreiro defend his championship status or does The DRC’s Barista have what it takes to reclaim what belonged to his fellow countryman for ages?

14 more exciting bouts featuring some of the best fighters from around the globe precede these championship battles.

Falling just short of a title shot via decision to the the divisons now number one contender, The Hitman Cole Henning, who has proved to be one of the hardest fighters in the organisation to match is not letting the decision of the judges or any other authority put a stop to his aspirations.

He steps back into Africa’s ultimate fighting arena, this time to clash with the continents ‘president’ and fan favourite, Tumisang Madiba.

Not one to back down from a challenge, ‘The President’ accepted the encounter with ’The Hitman’ knowing that whoever is left standing will be left in a position higher up in title contention.

Madiba has never left the hexagon without a standing ovation and at EFC 91 he will be looking to once again end the night in spectacular backflipping fashion.

The Brazilian invasion continues as former welterweight contender and division dark horse, Jose da Rocha returns to the continent and returns to the home of African MMA, and in doing so the BJJ and striking specialist, who’s wins in the EFC have all come by finishes, forges forward with his ambitions of gaining title status.

But he finds himself on a collision corse with ‘The Block’ from the DRC. Kaleka Kabanda, who has faced the best of the best across multiple divisions is no stranger to formidable opponents and whilst looking for his fifth win in the hexagon he will be looking to claim a cap of a top tier opponent and launch himself to a top ranking spot in the organisation.

As two continents collide only one powerhouse of MMA will rise as Jose Da Rocha takes on Kaleka Kabanda.

A heavyweight battle between two combatants with battle hardened backgrounds and critical consequences on the line is about to ensue as the Cameroonian lion, Nico Yamdjie, fresh off a recent victory hunts his third straight win in the hexagon, he locks eyes with former title contender, DRC’s Matunga ‘Triple H’ Djikasa.

The heavyweight landscape is wide open for a new contender and ‘The Lion’ is eager to take his place as Africa’s ultimate fighting king but in his way is ‘Triple H’, who’s four victories and unrelenting team of brothers behind him has exactly what it takes to get his hand raised in the hexagon.

Ahead of the main card the prelims are headlined by the clash between Brazil’s highly touted Gian Souza and South Africa’s undefeated Salahuddin Plaatjies. Ceileigh ‘Smiley Savage’ Niedermayr welcomes Dayne van Wyk to the EFC womens division and a host of other not to be missed match-ups starting from midday in Johannesburg are scheduled to take place.

Watch EFC 91 live from anywhere in the world on efcworldwide.tv