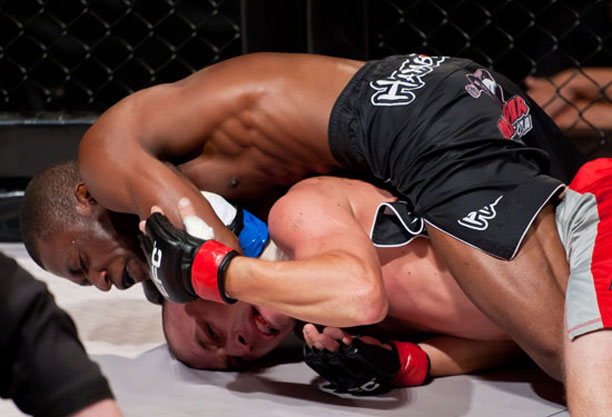 “Most people don’t believe me when I tell them I am a professional fighter. Some still think MMA is for brutal bullies with no manners. For a long time it has been my goal to prove them wrong and lead by example, to show that professional fighters can in fact be nice guys and good human beings.”

These are the words of EFC AFRICA’s Jean-Luc Kazadi, a fighter who lists philosophy, science and psychology among his interests. Not content to simply fight for a living, Kazadi typifies the modern breed of MMA athlete that is able to reconcile a life of fighting with intellectual pursuits and ethical behaviour.

Born and raised in the DRC, Kazadi began his martial arts journey at age 7, when his mother encouraged him to take up karate. He describes Bruce Lee as an inspiration that led him to Judo, Japanese Jiu-Jitsu and boxing. When he came to SA in 2008 to pursue a career as a professional boxer, he wandered into the Quantum Tribe gym and discovered a martial art that would change the rest of his life.

“Due to my background in many martial arts and my love for all of them, I found that I was well suited to MMA. Since 2009 I have been a full-time professional fighter and I have not looked back. I fight to display my talent, which is a gift from God. MMA is my life, and I have made it my mission to show MMA to everyone.” 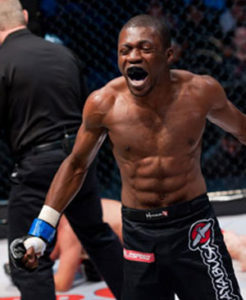 Kazadi made his EFC AFRICA debut at EFC AFRICA 01. However, his first performance was less than impressive. A natural featherweight, Kazadi was forced to compete at lightweight because it was the lightest division available at the time. After two rounds of holding his own, Kazadi was overwhelmed by a strong wrestler and suffered his first, and so far only, loss. The fighter that beat him, Wentzel Nel, would go on to become lightweight champion, while Kazadi would return as a featherweight at EFC AFRICA 07 to take one of the quickest victories of the night, choking Clinton Nel into submission.

“I didn’t go out there to make it such a quick fight on purpose. It’s not my fault it was over so soon, it was because of the difference in our skills. With all the intense training that MMA fighters do, as soon as an opportunity to finish the fight comes, you have to take it, whether it’s after 3 seconds or 3 rounds. Quick victories happen because of what your opponents give you.”

With EFC AFRICA 08 just weeks away, Kazadi is preparing for a new challenge: Demarte Pena. Both fighters have one win behind them and require another to legitimize their hopes of a shot at the featherweight title.

“I know he’s got a background in kickboxing but that he took his last win on the ground. I don’t know much else but it doesn’t matter, I will be ready for him. Training is my life, it’s all I do. I teach classes and I have a few sponsors to help but it’s not an easy journey being a full-time athlete. That’s why I have to be ready for whatever Demarte brings, so that I can make the most of this incredible opportunity that EFC AFRICA has given me. I would like to thank EFC AFRICA and all the MMA sponsors out there that have made it possible for fighters like me to turn passion into a living. I am so grateful that there are people out there with such big hearts and belief in this sport.”