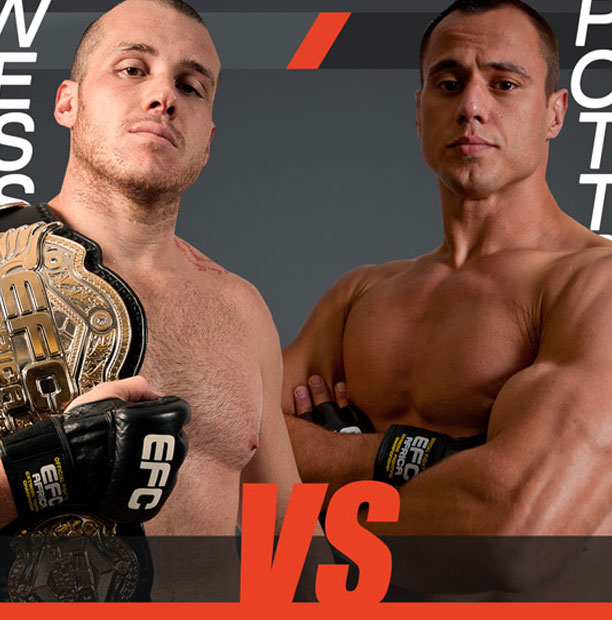 EFC AFRICA’s first super heavyweight bout as well as a heavyweight title fight present knockout potential like never before, while the middleweight and featherweight divisions usher in hot new prospects eager to make their mark.

For the main event of the evening, Ruan ‘Fangzz’ Potts challenges Norman ‘Chef’ Wessels for the EFC AFRICA heavyweight title. This will be Wessels’ first title defence since he became champion by defeating Bernardo Mikixi at EFC AFRICA 05 in October 2010. Wessels now has a record of 4-1. The title challenger, Potts, holds a record of 12-0 and earned his title shot by making very short work of his last two EFC AFRICA opponents thanks to devastating ground and pound.

At middleweight, Jeremy ‘Pitbull’ Smith makes his EFC AFRICA debut against Liam Cleland. Smith has a phenomenal 9-1 record and has already garnered international recognition. However, the single loss on Smith’s record was put there by Cleland, and Smith is raring to settle the score. Cleland has a record of 3-1 and will surely use all of his formidable jiu-jitsu weapons in this hugely anticipated rematch.

At featherweight, EFC AFRICA veteran ‘King’ Leo Gloss (8-2) takes on newcomer Charlie ‘Silky Smooth’ Weyer (0-0). Weyer may be new to the competitive MMA circuit, but he holds an undefeated boxing record and has been polishing his MMA game for the last year in preparation for his debut. Gloss also comes from a boxing background and has proven himself one of EFC AFRICA’s most dominant strikers. Prepare for a stand-up clash to remember!

Two more fights have been confirmed so far; Bernardo ‘Black Panther’ Mikixi will face Andrew ‘One Gear’ van Zyl at heavyweight, and EFC AFRICA presents its first super heavyweight bout, Tiny Strauss against Dewald Botes. Strauss and Botes both weigh-in at roughly 150kg and have a history of first round knockouts. Expect earth-shaking action when these behemoths collide in EFC AFRICA’s newest division!

EFC AFRICA 09 takes place at the Coca-Cola Dome on 30 June. Tickets on sale now at Computicket www.computicket.com, and tickets for the live broadcast to Nu Metro Cinemas will be available at www.numetro.co.za shortly. More information available at efcafrica.com