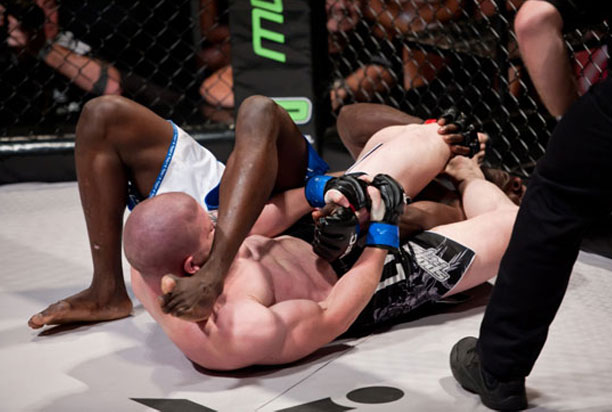 After a long day at the bank as a professional dispute analyst, Ashley Calvert likes nothing more than to unwind with combat sport confrontations. Win or lose he’s in MMA for the long run and although his first two EFC AFRICA experiences haven’t gone his way, Calvert now joins a new division and continues his quest for self-improvement.

“For me, the most important aspect of MMA is personal growth. I believe that if you challenge yourself to improve mentally and physically then you will become a better fighter and the rest will fall into place. Against Donald I tried to play a safe game and pound through his guard for three rounds. I made a mistake, got caught and learned that it’s better to improve your position than sit there and punch away. Against Francois I tried to overpower a bigger, stronger guy when I should have kept my composure and relied on technique and skill. In both cases I was beaten fair and square, I don’t make any excuses, but I have come back stronger.” 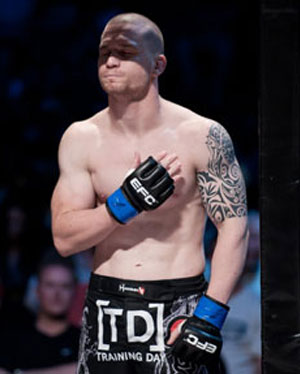 After EFC AFRICA 07, Calvert took on a new challenge by making the move from welterweight to lightweight. “There are so many good fighters at lightweight which makes it a very exciting, challenging division. My move to lightweight came about due to the range disadvantage I had with my last two opponents. The drop wasn’t easy; I had a low body fat percentage at welterweight so dropping down meant burning about 5kg of muscle. Although it took a lot of tough training, I believe I will now be a better competitor. Also, I’ve been doing a lot of training in a 12kg weighted vest so I’m only really going to find out what lightweight feels like when I get in the cage.”

For his next EFC AFRICA fight, Calvert faces fellow Southern suburbs resident Wade Groth. Both have a point to prove and there’s far more than Southern pride at stake. “I’ve never seen Wade fight but I’ve heard he has a good amateur record. He’s also young, hungry and ambitious. I’ve been told not to underestimate him so I’m expecting a tough fight. I’d say that my professional experience is an advantage, but I’m not here to badmouth Wade. I’m here to let people know that I’m going to enjoy this fight, put on a good show and improve on my previous performances.”

“I’d like to thank my coach Walter Wendt for being such a positive influence in my training and personal life. I’d like to thank the Quantum Tribe Brotherhood, Team Men of War and the Cassius Baloyi Boxing Academy for helping with my skills. In terms of sponsors I’d like to thank Bionic Revolution, Sport Republic, and Dusters. Finally a big thanks to my fiancée and family for their support, and the Lord for giving me this fantastic opportunity.”