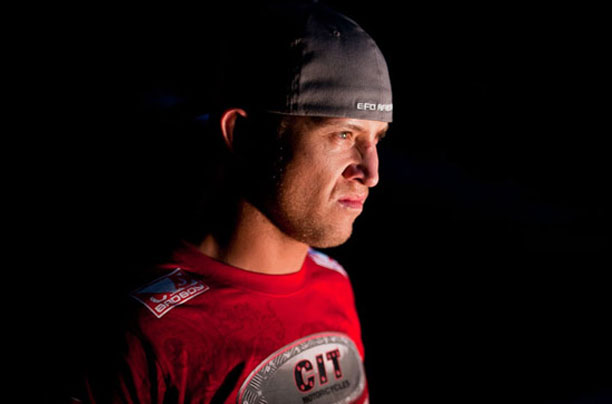 By knocking out a 5-0 welterweight at EFC AFRICA 09, Leon Mynhardt sent an unmistakable message to EFC AFRICA’s welterweight division – The ‘Iron Lion’ has been rebuilt and is more dangerous than ever!

Mynhardt’s absence between EFC 03 and EFC 09 was clearly time well spent; not only did he display some of the best striking that EFC AFRICA fans have ever been treated to, he established himself as a legitimate prospect for future title contention. “It was great to be back at EFC!” said Mynhardt. “The atmosphere was incredible and I was extremely glad to score my first punch KO and KO of the Night at the same time. I felt a lot more comfortable than the last time I fought at EFC because my time away helped me gain a lot of valuable experience and I now have a much better understanding of MMA.” 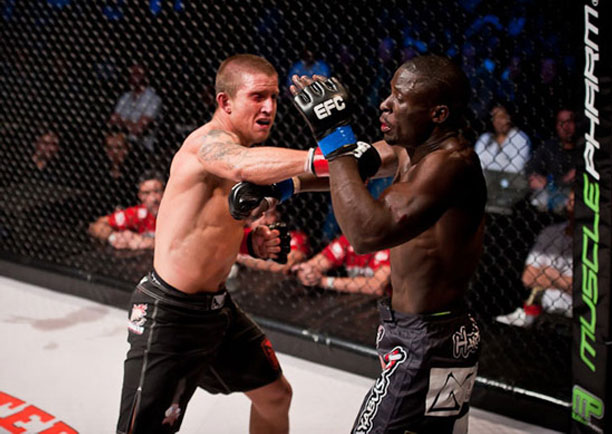 Landing a knockout right hand to Francois Kabulu during round three of their encounter will be a moment that comes up on highlight reels for a long time, but Mynhardt doesn’t take his victory lightly, and he compliments Kabulu’s stamina and resilience. “I knew Francois was incredibly tough after seeing his last fight. He came out very strong early on in our fight and I wasn’t surprised when he came out for the third round even though he’d taken a lot of damage. It’s easy to respect a guy like that because it was clear he didn’t ever consider giving up.”

For his next challenge, Mynhardt faces former title contender Nolan Swanepoel. Logic dictates that if Swanepoel was good enough to fight for a title, then if Mynhardt defeats him, he can’t be that far away from a title shot himself. “I know Nolan is a good all-rounder. I’ve read a bit about him and seen a few of his fights, but I haven’t studied him too closely so I’m expecting anything from him. If he wants to test his stand-up with me that’s fine, I stand with everyone. I’m also confident that if we go to the floor I’ll be able to keep his ground game under control.”

And Swanepoel is certainly aware of Mynhardt’s strengths, as he recently stated that one of the main reasons he wants this fight is because he knows Mynhardt will hit him and unleash his latent aggression. “In a way I guess that makes us similar,” said Mynhardt. “I also sometimes need a few punches to warm up and get going, but that doesn’t mean I’m going to stand around and let him hit me! I’m looking forward to fighting someone like me though, because trading shots and building up the intensity is what’s it’s all about. This isn’t old school MMA where guys just run at each other and someone gets a KO because of luck more than anything else. I think Nolan and I have the skills to give the crowd a really good fight.”

As for future plans, Mynhardt is cautious about aiming too high too soon. He also claims to have no grudges or scores to settle as he makes his way forward. “I don’t have overly high expectations of myself at the moment. There are so many good welterweights at EFC right now and especially fighting on this card so anything could happen. I don’t favour anyone or hope that certain people lose so that I get to fight a particular opponent in future. I’ll fight whoever’s put in front of me and train just as hard to fight them as I would to fight a champion.”

Like many of his opponents, Mynhardt likes to maintain a strong mental edge. To keep his mind as sharp as his strikes, he has turned to a difficult and ancient art – accounting. “I like to stay active and mentally alert, and a part-time job in accounting achieves that. The rest of my time is taken up by playing Xbox, reading Fighters Only, and teaching my students. I really enjoy the classes I teach because I have a group of beginners that I train Monday to Thursday and it’s fun to see their skills improve. On the topic of training, I’d like to thank my trainers Morne Visser and Attila Barna, and my whole team for supporting me, teaching me new skills and training with me every day.”