Q and A with EFC AFRICA Commentator Sias du Plessis 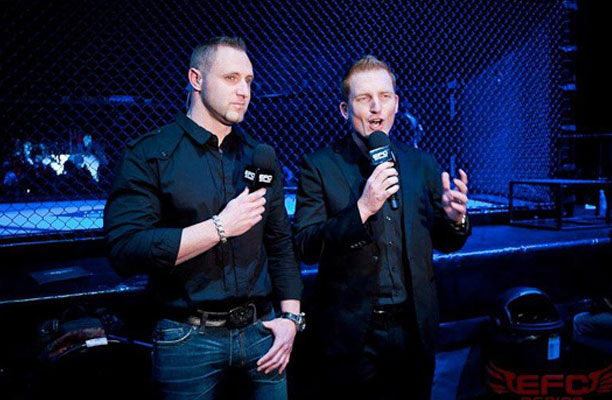 One of SA’s most knowledgeable and respected sports presenters, Sias du Plessis has also become the voice of EFC Africa. His passionate cage-side commentary with co-presenter Dirk Steenekamp perfectly complements the EFC action, and it’s clear that he is becoming a bigger fan with each event.

How did you get involved with EFC?
Well I’d always kept an eye on the UFC so I knew what MMA was when EFC president Cairo Howarth invited me to the first event. At that stage I wasn’t a huge fan but I had a fair amount of respect for MMA. I was sceptical about EFC Africa at first, I didn’t think a UFC-type promotion would work in SA and I turned down the invitation. But Cairo persisted and I attended EFC02 and had a great time. I thanked Cairo and he asked me to come down to the office to discuss something. I thought he had a few complimentary tickets in mind but he surprised me by asking me to get involved as a commentator. I realised I had a lot to learn but I’d already become a fan so I agreed. I sat down with Dirk Steenekamp, editor of Fighters Only magazine, for one round of rough commentary, we hit it off, did a good job and I’ve loved every minute of it since.

How did it feel to commentate at your first EFC Africa?
EFC03 was daunting! There was a lot of technical knowledge I had to catch up on and I got through a pile of UFC DVDs and scoured the net to prepare. As soon as the first fight got underway I got so wrapped up in the action I had an absolute blast. I really enjoyed the chance to let it flow and be myself on air. From start to finish the whole experience was an honour and I couldn’t wait for the next one.

What’s it like working with your co-anchor, Dirk Steenekamp?
We have a very good relationship and he’s great to work with. He gives me the inside track on what’s going on in the fights and the industry. I know what it can be like working with a newbie but he’s very accommodating and always willing to explain the different aspects of MMA to me. He brings knowledge of the sport, I bring broadcast knowledge and we meet in the middle somewhere to get the message across.

Which EFC Africa moments have been your favourites?
I’ve been very privileged to see some fantastic fights. I’d say that Chef becoming the first heavyweight champion was something really special. The Joubert/McLellan fight at Carnival City was also a great moment. Jacques was completely finished but he just kept coming back for more. We’ve also seen some spectacular knockouts, like when Alex Cheboub caught Mark Jones with that crazy kick, or Wade Groth’s performance at the last show. Now that I start to think about them there are way too many to mention! 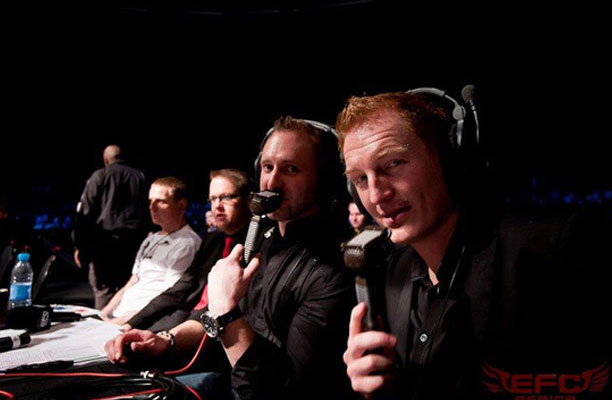 What are you looking forward to most about EFC 10?
EFC matchmaker Graeme Cartmell has got the fight card spot-on for EFC 10. It’s going to be really exciting to see The Wolf in action against Leo Gloss. Leo is such a cool dude that just keeps winning, but Pena definitely brings a tough test for him. Van Staden vs Bagattin is going to be a proper war, and Swanepoel vs Mynhardt well, someone’s going to sleep. Then obviously we’ve got the evening’s main event, Speechly vs Jakobi. I like that Adam is so unpredictable, but it he doesn’t keep his hands up Dallas could pounce and end it at any second. Plus, Dallas is a good Glenwood boy, from my old school, so it’s going to be an interesting one to watch.

Have you made any mistakes as an EFC Africa commentator?
There are always going to be moments when you say something before you’ve completely thought it through. I remember saying that Leo Gloss caught someone with a left hook, which turned out to be a right cross, but nothing horrendous. I’ve been told that I’m not allowed to say ‘It’s on like Donkey Kong,’ on air, apparently I say that a lot!

What do you do outside of EFC Africa?
I’m a sports presenter on Gareth Cliff’s morning show on 5FM. I also mentor the other sports presenters and keep tabs on the content. Besides that I’m heavily involved at SuperSport, where I’ve been for the past 7 years, mainly presenting rugby and working on the Blitz channel. I also do a bit of writing, MC work and I love movies. When I get the time I’m also big into games; first-person shooters and of course UFC Undisputed.

Have your perceptions of MMA changed and what do you think of the growth of the sport?
People are still narrow-minded when it comes to MMA. I come from no background in any martial art, but I can see how much the athletes put into this sport, training 7 days a week, honing their skills, developing tactics and showing so much courage. There are always going to be injuries, but rugby and motorsport produce those too, and people are open-minded about getting involved in those. I think EFC Africa is doing a phenomenal job running a professional sporting promotion with world-class medical teams and safety precautions. It may not be everyone’s cup of tea but thousands are rushing out to gyms to stay fit and learn more about MMA. The reality is that MMA is putting sports like karate, kickboxing and boxing in the shade and I’d suggest that people buy in sooner rather than later.