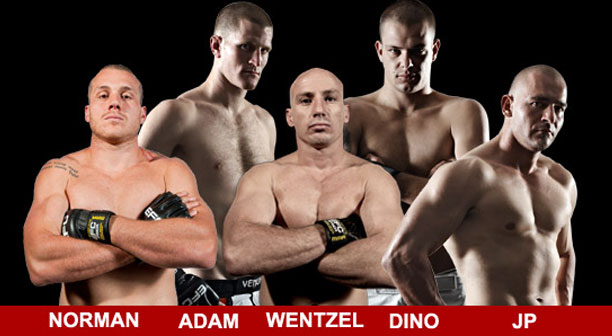 Johannesburg (South Africa) – EFC AFRICA 11 is almost here and everyone is wondering whether Ruan ‘Fangzz’ Potts and Costa Ioannou will make EFC AFRICA history by successfully defending their titles. For the year’s biggest mixed martial arts event, a number of EFC AFRICA athletes were eager to give their professional opinions on the four main event bouts. To find out how these epic encounters really end, don’t miss EFC AFRICA 11 on 10 November at the Coca-Cola Dome.

Below are some of the thoughts and predictions for the main event fights
POTTS vs. VAN ZYL, IOANNOU vs. CHEBOUB, SWANEPOEL vs. VAN STADEN and JOUBERT vs. RIGHTFORD

“Ruan is the champ for a reason and that needs to be respected. He has a solid game plan and the ability to slow a fight down in order to pick his moments, which works for him in all his fights. On the other hand, they don’t call Andrew “One Gear” for nothing. He has an aggression, intensity and toughness that not a lot of guys can deal with. Andrew, just like Ruan, has a lot of cage experience. Andrew is deceptively skilful and if he can sustain all the elements of his game through the first two rounds he will pull off the win by KO or TKO in the third.”

“Cheboub has shown a lot of depth in his last few fights and his unorthodox style has given him success, but I struggle to forget how convincingly the ‘X-Man’, Barry Duncan, eliminated him. I don’t feel he has fought anybody of substance since his encounter with the ‘X-man’, but that changes when he steps into the cage with ‘The Spartan’ Costa Ioannou. I have watched Cozzy evolve over time and he has hunger fuelled by rage. Cozzy never takes his preparation lightly and I don’t believe the ‘Iron Hobbit’ will be able to dig deep enough in any area to topple Cozzy. I can’t say how Cozzy will pull off the win but he will take the fight into dark places, any means, anyhow.”

“There are a few people out there that are very happy with this match up. In fact it’s been three years in the making. Nolan is pure class and has improved in every single one of his fights. This will definitely be a challenge for Martin as Nolan is a major player with ambition. Martin is in great shape and very keen for the confrontation with Nolan; it is clearly visible in his posture and demeanour. The punisher punishes without remorse or mercy so this fight will not end on points. TKO or KO late second or early third.”

“It’s without a doubt that Jacques is one of the toughest fighters in the EFC. However, rumour has it that he has not taken the fight seriously and has not prepared as he usually does. Rumours are rumours… but where there’s smoke there’s fire. ‘The Rush’ impressed us with his last performance by mentally and physically dismantling ‘The Terror’ Terblanche. He is riding on a confidence crest that is very dangerous. I feel Tyron will not submit or KO Jacques, but his style could nullify Jacques’ attempts to be the aggressor. The fight will go all three rounds with ‘The Rush’ taking it on points.

“This will be a cracker of a fight. Van Zyl’s been around a long time and I’m sure he’s been training his backside off for this fight. Potts impressed me against ‘Chef’ (Norman Wessels) when he won the title and I think he’s here to stay. Even though it’s a five rounder I see it going the distance. It’s going to be a war, but Potts will win on points.”

“Costa is an outstanding fighter and I think he’s another champ that’s going to be around a long time. The way I see it, even though Alex is incredibly wily, Costa will just be too strong for him. Costa defends his title by second round submission.”

“This is an interesting one because I want to fight both these guys and will probably get to take on the winner. Nolan looked good against Leon Mynhardt in his last fight. I’m sure a lot of people saw Leon taking that fight but he ended up tapping before he knew what was happening. However, Martin’s very explosive, and that’s going to be the key. I’m going with Martin, a win on points after three rounds. Keep your eyes peeled, you’re going to love this fight.”

“A tough one to call. Tyron has come far since his debut, disposing of muscle man Paul Terblanche terribly quickly with a vicious knee in the clinch. But Jacques has been in the game a long time and he’s building a ground game, so I see him taking this one by submission in round two.”

“Ruan has displayed some mad stand-up skills with elbows and knees being very effective, especially in his last fight against Norman Wessels. He stole the fight with well-placed strikes and came back at a late stage even though he was behind on points. Andrew, on the other hand, has shown extreme stamina and a jaw of steel in his fights with his normal non-stop action. I don’t see much happening on the floor as far as submissions go but some serious G’nP and stand-up banging can be expected in this match. I see van Zyl being the dominant force and taking this fight with brutal G’nP and some serious blood being spilled.”

“’The Professor’, as always, will look to fight this fight from his back, looking for a sneaky submission. However, I believe Costa will be too strong and technically sound for Cheboub, taking him with a submission or G’nP in the second round. This fight should produce Submission of the Night and the first ever retention of an EFC title.”

“Rightford showed in his first fight that he does not have the ability to submit an opponent and in his second displayed some good Muay Thai. However, unlike Terblanche (Rightford’s last opponent), striking is Jacques’ strength and if Rightford thinks he is going to be able to stand with Jacques he will be having second thoughts by the end of the first round, if he lasts that long. Jacques has shown his iron jaw and most of his opponents fear the fact that he does not go down easy. Rightford’s only defence will be to go to ground but that is not going to help him. I predict a KO or TKO in the first round by serious elbow damage.”

“Ah, prediction time, when I get to ruin another 4 friendships. Ok, van zyl is a runaway train stuck on full speed with no driver. He’s an engine of ultimate destruction that brings the pressure of physical madness. He’s motivated to take the title and he’s great on the ground with excellent control from top position. Potts is a classy fighter who’s taken most of his fights on short notice; he even had a disrupted training camp for his last title fight and still came out on top. He’s always impressive and when he smells blood he kicks it up about six notches. This will be a clash of titanic proportions but I give it to van Zyl by TKO in round one. Potts likes to wait and feel out his opponents but van Zyl is going to be all over him as soon as they start.”

“Costa is very tough, he’s a big, strong lightweight, an excellent submission specialist and he has outstanding stand-up. On top of all that, I’d say his biggest asset is his control and intimidation in the clinch. Cheboub is an MMA gem. He’s the most unorthodox fighter we have at EFC and he’s capable of pulling off a win at any time, especially when it seems he’s losing. I don’t think we’ve seen him fight to his true potential, it’s scary to think what he’s going to pull out of the bag on fight night, but I still give this one to Costa, TKO by knees and elbows in round four.”

“Nolan is a top welterweight contender with underrated stand-up, good ground and a high work rate. But to win this fight, he has to put Martin on his back. Martin has superb stand-up and ever-improving ground and now that he’s moved to Fight Fit Militia I think we’re going to see a different, better fighter. His experience and reach could make this a very long fight for Nolan, so I’m going to give it to Martin by ground ‘n pound TKO in round two.”

“Jacques is well-versed in combat sports and they don’t call him ‘Law and Order’ for nothing. He has exceptional striking ability but his ground game is a downside. Tyron also has great strikes, in fact world class, and he has trained with Nolan so he’ll have a very good ground game. I’m going to call the upset and give the win to Tyron because he’s aggressive and hungry and knows a win against Jacques will really put him on the map. I’m a fan of both but I think Tyron is going to explode and score a TKO in the third round.”

“Ruan has great endurance but Andrew is exceptionally tough, especially mentally, so I don’t see Ruan finishing him easily. This is a hard one to pick as it’s going to be a battle of wills. If I have to pick a winner I’ll say Ruan by submission in the third or fourth round, based purely on his fitness.”

“Alex is a very crafty, unpredictable fighter but if he catches Costa it would have to be very early. If Costa makes it to the second round I think he’ll be out of danger because Alex has had problems with his gas tank. Winner: Costa, by submission, second round.”

“This is an interesting one. Personally I’ve been very impressed with Nolan’s progress since we last fought. Martin’s been where he’s been and has a lot of fight time behind him, so this comes down to experience versus athleticism. Another important factor is that this is Martin’s first fight out of Fight Fit Militia. If we see the old Martin, he’s probably ready to go to a decision. If we see a new Martin, no one knows. However, I think Nolan has a good chance of taking this to the ground and getting a submission in round two.”

“Jacques is another very experienced fighter. You name it, he’s been there and done it. I have to give him the edge there, but I think Tyron has a lot of skills to bring to the party and he’s an exciting new fighter. I think Tyron has the capability to finish this fight by TKO in