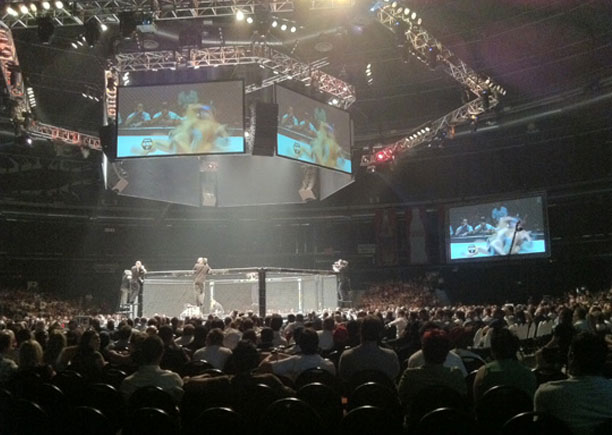 Tens of thousands more fans from around the world also logged on to watch live online, and thousands more watched at Nu Metro cinemas across South Africa. Fans were treated to world class strikes and submissions as two champions retained their titles and new prospects loaded with potential caused a few upsets in what was a brilliant night of MMA action.

“We have had fantastic feedback from all the TV broadcasters and fans alike, with the live broadcast pulling in brilliant ratings,” says EFC AFRICA president Cairo Howarth. “Africans love MMA, it’s a fact and, with our TV partners, fans from across the continent now have access to our world-class MMA promotion and athletes. Plus fans from many countries can follow and support their fellow countrymen as they compete at EFC AFRICA.”

In order to accommodate the live TV broadcast ample time was budgeted for all bouts despite the possibility of first-round finishes, and when a number of fights did end explosively early, the result was longer intervals and fight replays. EFC AFRICA is committed to giving fans the best possible experience at all live events while ensuring that through TV broadcast, MMA in Africa continues to grow at an exponential rate and the athletes get the worldwide TV exposure they deserve.

EFC AFRICA looks forward to 2012, when a minimum of 8 events will he held around South Africa and possibly beyond. EFC AFRICA 12 takes place at Carnival City on Friday 2 March. Tickets on sale now at Computicket www.computicket.com and tickets for the live broadcast to Nu Metro Cinemas will be available at www.numetro.co.za More information available at efcafrica.com