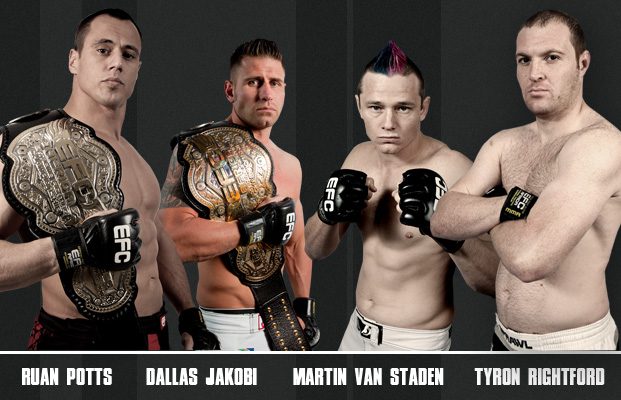 Johannesburg (South Africa) – EFC AFRICA 12 is almost here and opinion is sharply divided on whether Garreth ‘Soldierboy’ McLellan will remain EFC AFRICA middleweight champion when he faces Jeremy ‘Pitbull’ Smith. A number of EFC AFRICA athletes were eager to give their professional opinions on all four main card bouts. To find out how these epic encounters really end, don’t miss EFC AFRICA 12 on 2 March at the Carnival City Big Top Arena.

Below are some of the thoughts and predictions for the main event fights MCLELLAN vs. SMITH, HAWKEY vs. WAIT, BAGATTIN vs. OPPERMAN and ROBINSON vs. MAPHUTHA

“Garreth and Jeremy both come from good camps so both guys will be in good condition and have good game plans. Jeremy loves to stand and bang and has a great jaw and power and poses a danger to anyone in the division. He never really shows a ground game but trains with Gorilla Warfare so I imagine he has an underrated ground game that Garreth should be wary of. He also has a great ability to get to his feet quickly and deliver deadly knees and strikes. Garreth comes in with the belt and with that comes its own pressures. He is a well-rounded fighter, as we have come to expect from all FFM fighters, and you know he will come in with a huge following backed by an endless roar of ‘Hooraas’. I believe, however, that he has yet to face the best in the division, and that Jeremy is the start of a deadly line-up of challengers. I don’t think Garreth will want to stand and bang with Jeremy and will have to resort to his ground game and fitness to try to ‘grind’ a win. Jeremy by TKO in the 3rd.”

“Once again both guys come from good camps and I see this being war and my clear nominee for Fight Of The Night. Both guys have great stand-up and ground games. I believe Wait will rely on his ground game and Wesley will try and finish this standing, so I believe the better game plan may be the key to the win here. Wesley Hawkey by judges’ decision.”

“Well done to EFC AFRICA for finding Michiel as a replacement when Martin van Staden became injured. We have all been waiting for Dino and Martin for a while and when I heard it was called off again I was really disappointed. But then EFC pulled a rabbit out of the bag and replaced Martin with Opperman! Both guys have exceptional stand-up and this is going to be a no-holds-barred K1 war. This is also another contender for FOTN. It’s really a hard one to call. I will take a guess and say Dino by TKO.”

“Sean and Tumelo is a tough one to call as I have not seen much of them in the cage. Sean has a huge following after only one pro fight and I know his fans will be keen to see him in the hexagon. He is definitely the stronger of the two fighters and could probably throw his opponent out of the cage with ease. The only thing I am sure of is that the Virgin Active management will be glad to have their weights back for a while! Tumelo is coming off a loss and will have a lot to prove and with his striking power he is sure to be a dangerous opponent for any stand-up opponent. This fight will be dominated by Karate, which will be interesting to watch. I will take another guess here and say Sean via TKO in the 2nd.”

“This is gonna be a tough fight but I don’t know if Garreth will be able to weather the storm; Jeremy is just a whole other level of angry! Look, Garreth is good, don’t get me wrong, plus he’s a mate so it’s hard to vote against him, but I see Jeremy taking this by second round TKO.”

“Wesley Hawkey takes this one. This is more of a gut decision than based on analysis though. I’ve seen Denzil against my teammate Adbul, but that fight didn’t reveal much. I’ve seen a lot of Wesley, and the guy always comes in conditioned with the heart of a fighter, plus he’s got the skill to pull off a win. Wesley wins by second round TKO, but I wouldn’t rule out KO either.”

“I haven’t seen Dino fight in a while due to his injuries, but Michiel’s been fighting well and showing off a decent ground game. Since they are both strong strikers I think they’ll keep this fight standing, unless Dino wants to try to prove a point. They’re both tough enough to make this last, so I see it going all three rounds to a decision. I think the judges will give it to Dino.”

“Sean was a Durban boy for a long time and from what I saw, he’s got what it takes to get somewhere. I don’t know what he’s been up to since he moved to Joburg but I’m sure he’s hungry to get back into the cage after sitting out with a broken hand. He’ll have something to prove and, unless he gets hit with an unlucky punch, he will probably get in close and take this by submission in round two.”

“I think this is going to be a very tough fight for both guys. Jeremy is extremely durable, but I have to give this fight to my teammate Garreth because of the way I’ve seen him train. He’s put in way too much work and his work-rate is going to be far too high for Jeremy on 2 March. Garreth is in the best shape he’s ever been and the only way Jeremy can win this fight is if Garreth makes a mistake. Garreth takes it by submission in round four.

“Wow, this gonna be interesting! I’ve been following Wesley’s training camp on BBM and Twitter and I know he’s been having a tough weight cut. If he makes weight and comes into the fight as energetically and aggressively as he usually does, he has a very good chance. However, you can’t write Denzil off as he’s skilled and experienced. I really like both these guys but if I have to choose then Wesley, by TKO in round two.”

“I actually want Dino to win this one so that I can get a shot at him. However, if Michiel is fit and not too dehydrated from his drop to welterweight, then I think he will pick Dino apart. Michiel is just physically stronger, a big hitter and Dino doesn’t have the technique to put him away. Third round TKO to Michiel.”

“If Tumelo fights like he fought Chett Meyer in his last fight, then he will lose to Sean on the ground. However, if he applies his stand-up skills properly, then Sean will have his hands full. As they are both fit, well-conditioned guys, I think this will end late in the second round by TKO in favour of Sean.”

“This one’s easy; Jeremy will take the win and the title by second round KO. Jeremy’s stand-up is a lot better than Garreth’s and he’s a really good sprawl-and-brawl fighter. No matter how hard Garreth tries to take him down, Jeremy will stay on his feet and be able to deliver that knockout punch.”

“Denzil will win because he has the better skills. Wesley’s not a bad fighter and he’s strong, but not as strong or experienced as Denzil. I see this one ending in round two, with Denzil’s hand raised after a submission victory.”

“Now this should be a good fight but I’m going with Michiel. This is definitely a three-rounder because Michiel’s got great strikes and much-improved ground skills, and although Dino’s good, he might be suffering from ring rust due to his lack of fights last year. Michiel gets the judges’ decision.”

“Another great fight and a tough prediction. It’s hard to choose, but I think Sean will come out on top. They’re both tough boys and it’ll be good to see some strong light heavyweight strikers, but Sean’s just a bit tougher. This one is touch and go, but maybe another three-rounder with Sean getting the win.”