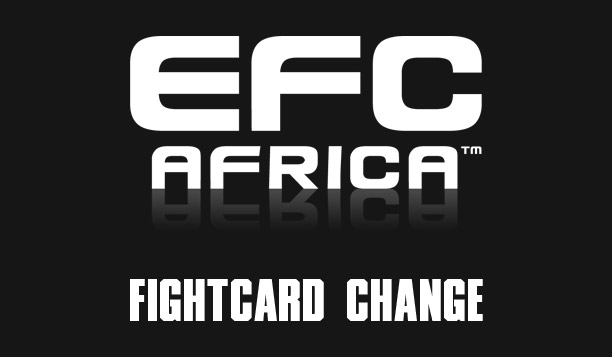 Johannesburg (South Africa) – With just two days to go to Africa’s premier MMA event, Nigeria’s Steven Momah has withdrawn from EFC AFRICA 12 due to health concerns. He has been replaced by Pretoria’s Markus Taljaard, an undefeated lightweight prodigy who holds a professional record of 3-0 and an incredible amateur record of 9-0.

“Ever since I started MMA I wanted to be a professional fighter and compete at the highest level,” said Taljaard. “At the beginning of the year I increased the intensity of my training with the goal of getting into EFC AFRICA, so when the call came through that a late replacement was needed, I was extremely happy to step in. Ryan’s a great striker and already holds a title outside of EFC AFRICA, but this opportunity is exactly what I’ve been working for and I look forward to fight night.”

According to EFC AFRICA matchmaker Graeme Cartmell, Taljaard will be an excellent addition to EFC AFRICA as his willingness and excitement represent the true spirit of MMA.

“It’s amazing when a fighter can step up to the plate at such short notice with absolutely no hesitation. This guy is a warrior and he’s what African MMA needs.”