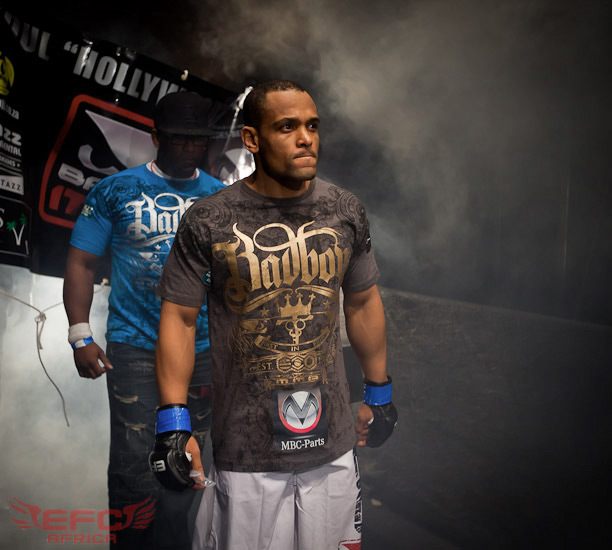 Johannesburg (South Africa) – It’s no secret that Abdul ‘Hollywood’ Hassan has been calling for a bout with ‘King’ Leo Gloss for some time. When the two finally meet in the hexagon at EFC AFRICA 13 on 13 April, will Hassan feast on the sweet taste of victory or a large helping of humble pie?

Abdul Hassan is the most experienced athlete in the featherweight division. However, his promising start at EFC AFRICA 10 gave way to a first round loss at EFC AFRICA 11 against Denzil Wait. Hassan claims that he wasn’t at his best in that bout, but will be bringing his A game to EFC AFRICA 13. “I had a really tough fight with Denzil that taught me a lot, like don’t try to fight with only two weeks hard training behind you,” says Hassan. “Before the fight I lost my niece and it affected me very badly. When you suffer through a loss like that that all you want to do is beat someone up, but when I got in the cage with Denzil I wasn’t able to beat anyone up. The loss to Denzil made me even more depressed and I didn’t leave the house for three weeks. It was a tough time but eventually I was able to put things back together and now I’m focused and ready to fight.”

In the weeks before EFC AFRICA 13, Hassan turned to social media and made it very clear that he’d like to take on boxing veteran Leo Gloss. “It’s nothing personal. I called out Leo because he’s in the top 5 and if I beat him I’ll be back there. Besides the fact that I’m going to beat him up, I’m confident that I’m a much better wrestler and I’m even looking forward to seeing what happens in the stand-up exchanges. I’ve been sparring with great boxers and relentless kickboxers so I’m happy to take on Leo at his own game. However, I do respect his boxing and in my opinion he has the best stamina in the whole EFC. He has energy for days, he won’t stop, and I guess I’ve got a lot to prove.”

Gloss’ aggressive boxing and never-say-die attitude have made him a perennial fan favourite. Although he was unsuccessful in his last fight, a 5-round battle for the EFC AFRICA featherweight title, he is confident that he’ll be able to work his way back to another title shot, even against someone that seems so eager to get in the cage with him. “People have asked whether I’m bothered that Abdul called me out for this fight but the answer is no, I really don’t care,” says Gloss. “Maybe Abdul didn’t get attention when he was small so he’s looking for it now. Whatever the reason, it doesn’t matter because I’ll fight anyone EFC AFRICA decides that I must fight. I’m not the type of guy that goes on twitter or facebook to call someone out. I don’t say ‘boo’ or ‘baa’ I just fight who I need to.”

According to Gloss, preparation is going well and he’s training hard like always. “Abdul may have some skills on the ground but my stand-up is way better than his and so is my fitness, so I haven’t changed much to prepare for this fight, just shifted my focus to ground work and picked up the intensity. I know he’s mainly a ground-worker and I’ve seen some of his fights so I expect him to try to take me down. That also doesn’t bother me, he can come try.”