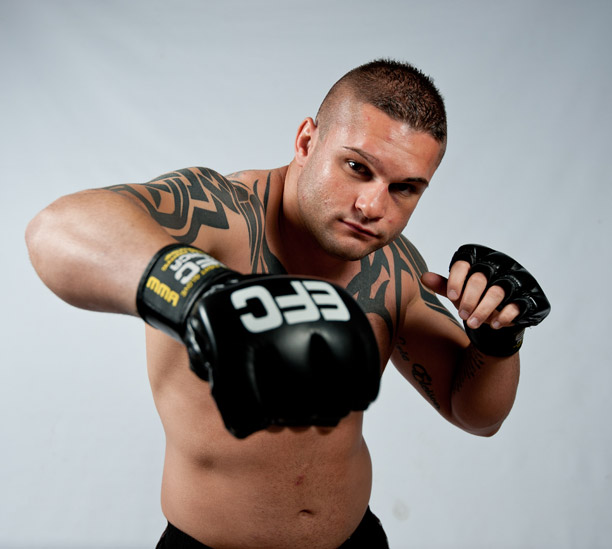 Organizer Pietro Cignoli says: “We invite contestants to prove their power and fitness against the 700+ KG Tyre called ‘El Grande.’ Each contestant will be paired up with a boy from the Twilight Children’s Home. Contestants and their partners from the Twilight Home will first do the Fighting Fit training session. Being able to train side by side with these guys is a highlight for many of the Twilight boys – for an hour they too are EFC Fighters! Then the 12 contestants will each get a chance to roll the “El Grande” for 80 meters, from one side of the field and back. They will be timed and the fastest time will then become the March Champion. The first three places will then qualify for the finals and win some awesome prizes. The final will be in December where the 2011 champion Carlo Cignoli, from team Hardcore, will be defending his title. The overall winner will take home prizes totalling almost R10 000.”

Newly crowned EFC Africa middleweight champion and ex- Kensington resident Jeremy ‘Pitbull’ Smith will be at the El Grande on the 25 March to meet and greet his fans, pose for photographs and sign autographs. President of EFC Africa (Extreme Fighting Championship) Cairo Howarth and Dirk Steenekamp, Editor of Fighters Only magazine will present Jeremy Smith with his Championship Ring created by Orpheo Twins Jewellers. Orpheo Twins gives each EFC AFRICA champion an exquisite hand-crafted EFC AFRICA Championship Ring, valued at R30 000, which they keep regardless of whether their titles are successfully defended in future. Orpheo work is uniquely distinctive, blending Latino-African passion with Swiss precision to create some of the world’s most sought-after jewellery.

The Fighting Fit fitness program is supported by EFC Africa, the Chief of the South African National Defence Force (SANDF), General Solly Shoke, acting commanding officer of the 46 Brigade in Kensington, Colonel Dinga and Fighters Only Magazine. It will be a fun day for the whole family, with a jumping castle for the kids and loads of prize giveaways .Refreshments will be available. Spectators will get a chance to rub shoulders with some of EFC Africa’s top MMA athletes. For further info check out www.fightingfitafrica.com

Event starts at 10am at the 46 Kensington Sports Club & Academy, Cumberland Road Kensington opposite the 46 Brigade military base.