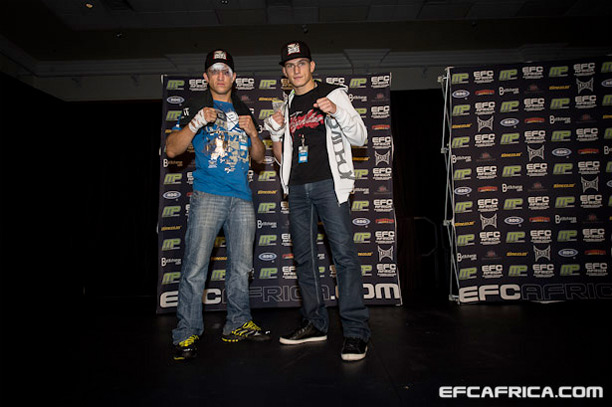 Johannesburg (South Africa) – EFC AFRICA 13 on 13 April brought world class MMA action to Cape Town and featured 24 of Africa’s finest warriors. Of the 12 bouts, 6 ended by submission due to joint locks or chokes, 1 by submission to strikes, 3 by technical knockout due to strikes, and two by judges’ decision after three rounds.

Of these, the most serious injuries were Robinson’s and Jakobi’s. Fortunately, Robinson’s CT scan revealed no intra-cranial injuries and he was in good spirits as he left for holiday in Thailand the next day. Jakobi was admitted to hospital after his bout and was found to have a right orbit fracture and broken nose. On 17 April he suffered a concussion-related seizure and was readmitted to hospital, but has since been discharged. An MRI and EEG scan revealed no intra-cranial injuries and he is now recuperating at home.

EFC AFRICA is pleased to announce that all injured athletes are recovering well and looking forward to their next bouts. EFC AFRICA returns to Johannesburg’s Carnival City on 1 June for EFC AFRICA 14. Tickets on sale at Computicket www.computicket.com and tickets for the live broadcast to Nu Metro Cinemas available at www.numetro.co.zaMore information available at efcafrica.com