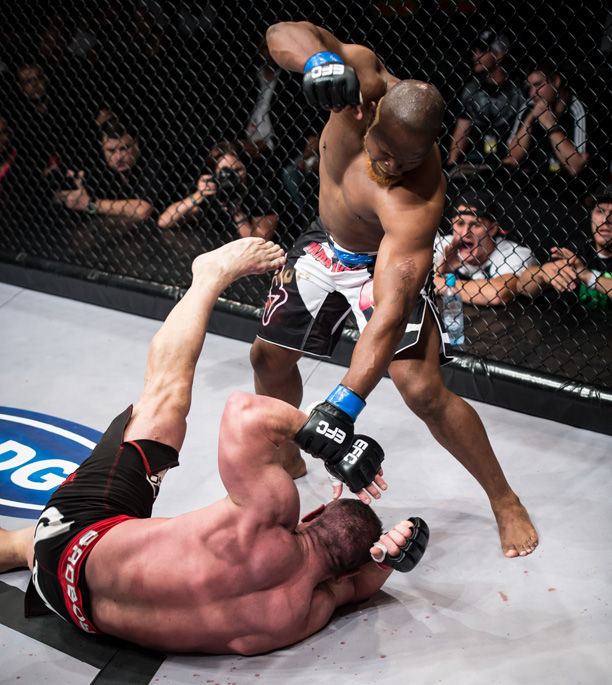 For the next 5 weeks, Mikixi vows to pay the price of victory in blood and sweat so that he can return to his family as a conquering hero. “When I was training to fight Calvin Robinson at EFC 13 I did not see my family for 6 months. I left them in Cape Town so that I could train at altitude in Johannesburg, to fight better and grow my career. It was very difficult leaving my family, and it was very difficult preparing for the fight with Calvin. My coach Carlos de Sousa killed me six days a week. I was boxing with Cassius, doing Muay Thai with Bakulule, grappling with Abel, conditioning with Carl… it was so tough, but after all of that I knew I was ready to end the fight in the first round.”

According to Mikixi, his bout at EFC 13 in April went according to plan thanks to all the hard training, and he is looking forward to facing whatever skills his opponent at EFC 14 has to offer. “Calven was more than 10kg heavier than me. When you fight a bigger opponent, you have to control everything. I am second dan black belt in judo so I knew I would be able to use my judo to take him down and control him. When we were on the cage he was kicking me and using his energy, and he could not breathe nicely when I was pushing him in the clinch. When he was tired I took him down and it was time to finish him. He was strong, but the fight was easy for me. I think the Egyptian will give me a tougher fight but he is going to feel it just like Calven did. They have good stand-up skills in Egypt so I know he will be coming to hit me but I am going to beat him. This fight won’t be long. I am the new improved Bernardo and I am coming for the title.”

Fans have asked about the flaming orange and blonde peroxided beard, sideburns and even eyebrows that Mikixi brought to EFC 13. “My hairstyle is called the ‘Calven Cut’ because it cut Calven out of the fight. Lots of people like this style so I am going to keep it. I know it is scary because even my own kids were scared of me when they saw my hair just before EFC 13. I went to see them before the fight with Calven and I told them I was going to win, and they believed me, they said it back: “Papa, you are going to win.” It gave me even more power and more courage. After seeing them I knew that EFC 13 was my time to win. Thank you to my children Dieu-Merci, Tshianda and Botle Mikixi, and also my wife Eva Mikixi. Thank you Cape Town! It was good to fight at home because a dog is stronger at his own house! Lastly, thank you Zunaid Moti from Abalengani, who promised me a GTI if I could beat Calven. I am getting it this week!”

When the opportunity to compete at EFC 14 came along, Mikixi did not hesitate to take it, even though it meant staying away from his family for even longer. “I stayed away for 6 months, now I have to stay away for 5 weeks, but when I win this one I can go and stay with them for 1 month. They understand that I have to do this. I am living like a soldier, preparing for battle away from my family.”

Will Mikixi emerge victorious? Find out at EFC AFRICA 14 at the Carnival City Big Top Arena on 1 June. Tickets on sale at Computicket www.computicket.com and tickets for the live broadcast to Nu Metro Cinemas available at www.numetro.co.za More information available at efcafrica.com