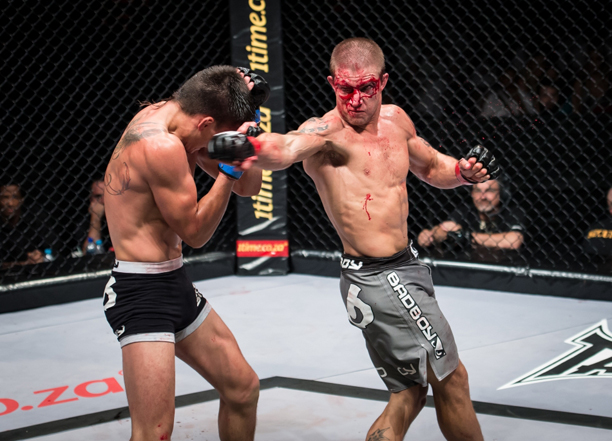 Johannesburg (South Africa) – Madge vs Mynhardt at EFC AFRICA 13 was undoubtedly one of Africa’s bloodiest and most exciting MMA bouts ever, and hands-down winner of Fight of the Night. For two and a half rounds, fists and feet flew and neither warrior would back down. Madge was clearly doing more damage in round one, but Mynhardt was relentless and eventually landed a TKO blow at 3:23 in round three. 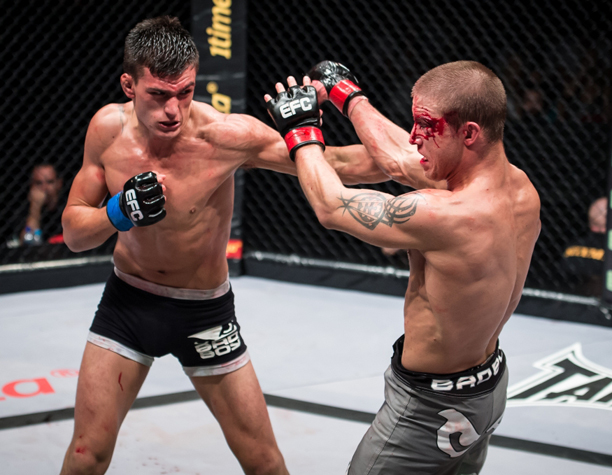 Here’s what Madge and Mynhardt had to say about the bout afterwards:

Don Madge: “Just watched my fight again and there was definitely confusion between me and the ref. Nonetheless, Leon brought it and deserves the W! I’m the 1st to admit when I get beat, I just think the ref should’ve handled it differently. I wanna thank Leon for being an absolute monster and being part of possibly the best fight Africa has ever witnessed – he is a great guy, a machine fighter and he deserves all the respect in the world! It’s a pity about how the fight ended on Friday but we both know that we will be facing off in the cage again soon and we can settle the score once and for all. Mad, mad love for all the fans and supporters that were screaming for me on Friday – you guys make it worthwhile!”

Leon Mynhardt: “The fight with Don was one of my toughest battles yet. The guy is truly a warrior and I am glad that we could put on such a great war for the fans to enjoy and remember for a very long time. I would have liked the fight to have gone the distance and see what the results would have been. I can’t wait for my coach and Mentor Morne Visser to give me the go ahead to get back into training. Thank you EFC AFRICA for an awesome experience in Cape Town and thanks to all supporters, friends and family who were rooting for me!”

Fans have been screaming for a rematch and according to matchmaker Graeme Cartmell it’s not out of the question, but it’s a battle to look forward to somewhere down the line. “I’ve spoken to both guys and they would both take a rematch,” says Cartmell. “Leon won’t shy away from any fight so he’d be keen, and Don really wants an opportunity to set the record straight. However, as much as Don wants another fight with Leon, he needs to move on for now. From an EFC AFRICA point of view, the ref made the right call and the stoppage was perfectly legitimate. A rematch isn’t out of the question, it just won’t be happening any time soon. Both guys beat each other up and both need time to heal. Now that we’ve seen what they’re capable of, let’s see how those skills hold up against other opponents. Leon will probably be back in July, while Don will most likely want to fight in front of his home crowd again in September.”

EFC AFRICA returns to Johannesburg’s Carnival City on 1 June for EFC AFRICA 14. Tickets on sale at Computicket www.computicket.com and tickets for the live broadcast to Nu Metro Cinemas available at www.numetro.co.za