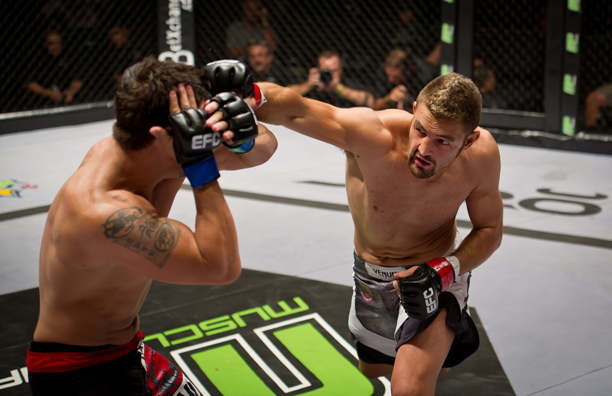 Johannesburg (South Africa) – At EFC AFRICA 14, Danie ‘Pitbull’ van Heerden takes on former middleweight champion Garreth ‘Soldierboy’ McLellan. For van Heerden, it’s a chance to show that his show-stopping win at EFC AFRICA 12 was no fluke. And if he wins against McLellan, he’ll almost certainly be granted a title shot against current champion Jeremy Smith.

“Garreth is the ex-champion but that doesn’t give him an advantage over me, all it does is make me want this fight more so that I can show people I’m at championship level,” says van Heerden. “And after Garreth I’m going for Jeremy. I don’t think either of them gave their best when they fought, there was something missing and I’m bringing it.”

Van Heerden captured the middleweight division’s attention with a swift win against Donavin Hawkey at EFC 12. Although he was a late replacement and a definite underdog, van Heerden managed to pulverise Hawkey before choking him into submission in just three minutes. “I definitely think Garreth will be a tougher test than Donavin was. As soon as Donavin saw his own blood he backed off, but I don’t expect that to stop Garreth. Garreth’s also a good ground fighter, not just a boxer, so I don’t think I’ll be able to beat him by rear naked choke that easily. Other than slightly longer reach, I think Garreth and I are very similar. We’re both good all-rounders so I don’t think either of us has much of a physical advantage over the other.” According to van Heerden, there’s only one real difference between him and McLellan, although it’s absolutely crucial: “I have better coaches.”

Since his triumph at EFC 12, van Heerden has been training hard but eating hard too. Last time he looked at a scale he was 98kg, which means he has around 14kg to lose before fight night. “It may sound like a lot but it’s nothing compared to my last fight. Last time I lost 20kg in two weeks, this time it’s 14 in 5 weeks so it should be easy!”

Find out whether van Heerden makes the cut at EFC AFRICA 14 at the Carnival City Big Top Arena on 1 June. Tickets on sale at Computicket www.computicket.com and tickets for the live broadcast to Nu Metro Cinemas available at www.numetro.co.za information available at efcafrica.com