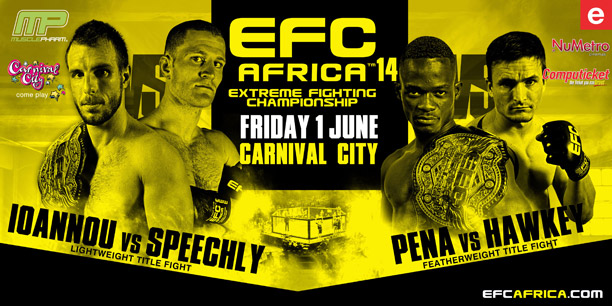 Johannesburg (South Africa) – EFC AFRICA returns to Johannesburg for EFC AFRICA 14, where featherweight and lightweight titles will be contested and Africa’s top mixed martial artists will battle it out in the hexagon.

Massively popular undefeated lightweight champion Costa Ioannou will attempt to hold onto his belt when he faces former welterweight champion Adam ‘The Prodigy’ Speechly. Both are well-rounded athletes with good records (Ioannou 4-0, Speechly 12-3), but only one can be champion.

At featherweight, Wesley ‘The Young Assassin’ Hawkey (7-2) challenges Angola’s Demarte ‘The Wolf’ Pena (3-0) for the featherweight title. Pena has displayed excellent wrestling in his previous bouts, but heavy-handed boxer Hawkey warns that he’ll need far more than that to retain the title.

EFC AFRICA 14 promises to be another massive milestone for African MMA. Millions of fans across the continent and around the world are waiting to see who emerges victorious at Africa’s premier MMA event, and Facebook and Twitter have been buzzing with predictions!

Also on the card:
– Angola’s Bernardo Mikixi meets Egypt’s Mahmoud Hassan at heavyweight. Both are fresh off first round wins at EFC AFRICA 13, and another win will propel one toward a title shot.
– Former middleweight champion Garreth ‘Soldierboy’ McLellan hopes to rebound from his unsuccessful title defence at EFC AFRICA 13. However, he faces Danie ‘Pitbull’ van Heerden, a former heavyweight that has dropped two weight classes to reach middleweight, where he is swiftly climbing the ranks.
– DRC’s Francois Kabulu lost a controversial points decision at EFC 13 and wants to take out his welterweight frustration on Egypt’s Amr Wahman. Wahman is a former kickboxing champion who already has a KO win to his name at EFC AFRICA.
– Wentzel Nel is a formidable wrestler also hoping to reinvent himself in a lighter division. EFC AFRICA’s first champion has made the cut from lightweight to featherweight in order to make another run at an EFC AFRICA title. He faces Denzil Wait, who has had mixed fortune at EFC AFRICA so far and is eager to establish himself as a threat.
– Terrence Griessel and Garreth Buirski lock horns at featherweight. Griessel hopes to crack the top 5 rankings, while Buirski wants to keep the momentum going after a win at EFC AFRICA 12.
– Wade Groth and Markus Taljaard both suffered defeat in their previous bouts and are hungry to wipe the slate clean. Both lightweights are formidable strikers so expect a slugfest!
– Welterweights David Buirski and Kelvin Mwale make their debuts at EFC AFRICA 14. Buirski is undefeated across 8 amateur and 2 professional bouts, while Mwale is seen as a strong prospect and one of the division’s most physically powerful athletes.
– Boxing prodigy Koba Iakobidze takes on George Micouris, an undefeated and internationally experienced threat. And more!

EFC AFRICA 14 takes place at the Carnival City Big Top Arena on 1 June. Tickets on sale at Computicket www.computicket.com and tickets for the live broadcast to Nu Metro Cinemas available at www.numetro.co.za