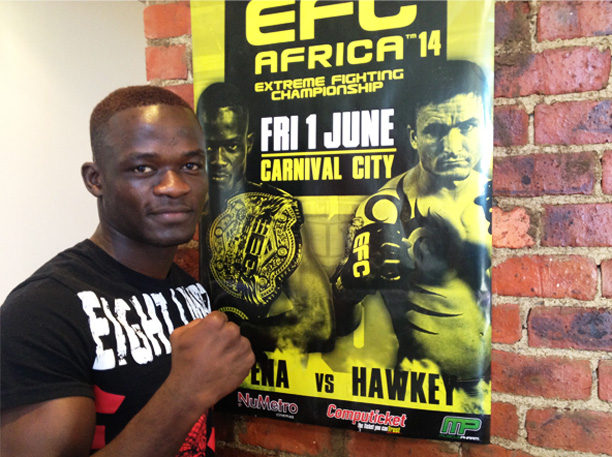 Johannesburg (South Africa)– With just 11 days to go until EFC AFRICA featherweight champion Demarte Pena faces Wesley Hawkey in the hexagon, the Angolan champ is winding down his most intense training camp to date.

“I’m very excited about this fight,” says Pena. “This is the first time I’ve had a proper training camp and I’ve been training to defend my title since November 2011. I’m a very different fighter to what I was in my last fight and I think people are going to see a new side of me. Wesley seems to think I have no stand-up so it’ll be interesting to surprise him. I’m better-rounded now but obviously still a very good wrestler, so if all else fails he’s going to the ground.”

When Pena joined EFC AFRICA he was a small featherweight, weighing in at just 63 kilograms without cutting any weight. “I’ve put on quite a bit of muscle since then. For my second fight I was 64kg, when I fought Leo for the title I was 65kg, and now I’m 71kg. This will be my first weight cut at EFC AFRICA and I don’t expect it to be difficult at all; I expect to be much fitter, faster and stronger than ever before.”

Pena explains that the vast majority of hard work is behind him and that the remaining days will be spent on game plan-specific drills, recovery and tactics. “Many other camps would be training really hard right now but that would leave the athlete exhausted on fight night. We trained really hard over the first few weeks and now just have game plan implementation and visualisation to do. I believe so strongly that I will defend my title that I can already hear EFC announcer Shane ‘The Duke’ Wellington saying ‘And still the EFC AFRICA featherweight champion, Demarte ‘The Wolf’ Pena!’”