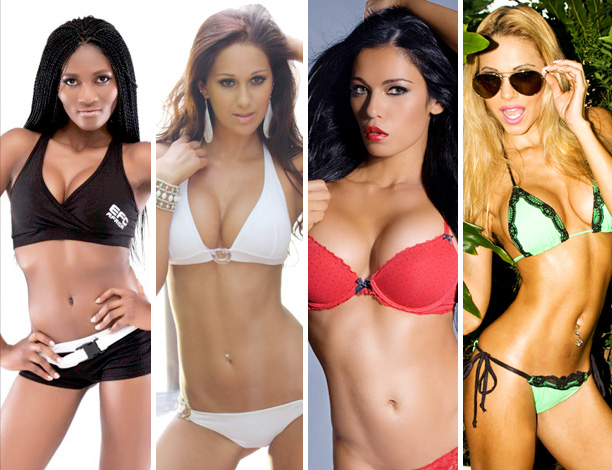 Johannesburg (South Africa) – The beautiful EFC Girls will be back in action this Friday, 1 June at Carnival City for EFC AFRICA 14. Brought to you by RDG (Rex Diff and Gearbox), Riana Roberts, Victoria de Lima, Eno Akpan and Naomi Das will strut their stuff at Africa’s biggest MMA spectacle. Fans will be able to meet the EFC Girls at weigh-in on Thursday and at the live event on Friday, or look out for them on e.tv from 22:30.

Eno
Nigeria’s Eno Akpan has a level head on her shoulders, studying computer science with hopes of being an IT specialist someday. In the meantime, she uses her looks to her advantage as an EFC Girl. Favourite places to party include Taboo and Hush. She likes to cook, dance and play video games.

Victoria
EFC AFRICA’s most curvaceous cage-side attraction and June 2011 Playboy Playmate, Victoria is a professional model, belly dancing snake charmer and much more besides. She makes music with Mark Stent, plans functions and somehow still manages to fit in many EFC AFRICA events a year!

Riana
An interior designer who also takes pride in her exterior, Riana Roberts is a fitness fanatic in love with gym, yoga and pilates. This fiery scorpio loves being close to the MMA action, which is why being an EFC Girl suits her perfectly. Look out for her in various fitness publications or in the clubs dancing to the latest David Guetta tracks!

Naomi
This half Indian, half English beauty is already well acquainted with MMA, having been a fan for some time and having posed for Fighters Only magazine. She’s also an experienced model with wins in the SA leg of the International Playboy Bunny Search, FHM top 10 models in 2010, one of FHM’s 100 sexiest women in the world, Miss Bondi Beach, Miss H20 and much more.

Each EFC Girl guarantees a knockout even outside the hexagon! See more of them at /efc_africa_hexagon_girls.php

EFC AFRICA 14 is presented by MusclePharm and takes place at the Carnival City Big Top Arena on 1 June. Tickets on sale at Computicket www.computicket.com and tickets for the live broadcast to Nu Metro Cinemas available at www.numetro.co.za. The three main card bouts will be broadcast live across Africa on e.tv, starting at 22h30 CAT. Full event streamed live online.