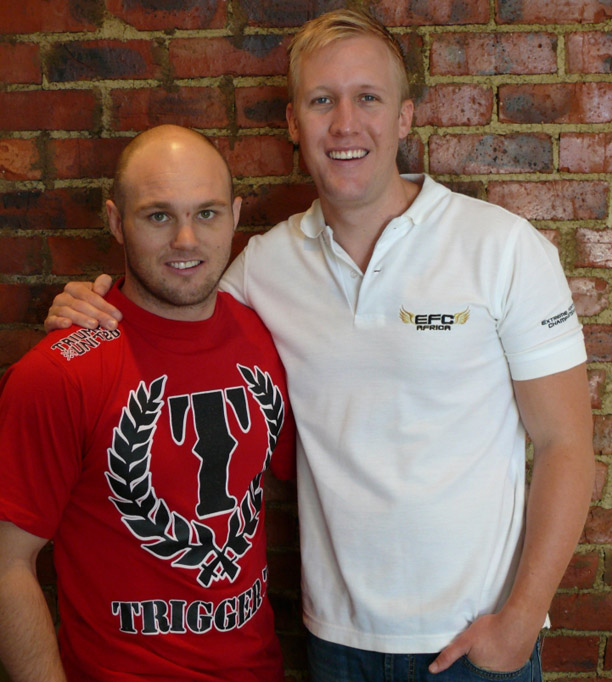 Johannesburg (South Africa) – Terrence ‘The Trigger’ Griessel is locked and loaded for his featherweight debut at EFC AFRICA 14. After losing on points against Wentzel Nel at EFC 11 in a lightweight bout, Griessel has a point to prove when he faces Gareth Buirski on 1 June.

“My skills have improved in leaps and bounds this year,” says Griessel. “I can honestly say this is the most growth I’ve ever experienced between fights and it’s all to do with my renewed focus. Since the fight with Wentzel I’ve been really determined to improve. I feel I was robbed with the judges’ decision; I definitely won the stand-up and my ground was solid so I think Wentzel got lucky and he knows it.”

Griessel vows not to leave it up to the judges against Buirski, but knows that’s easier said than done. “I know Gareth has a great amateur record and he’s undefeated so far as a pro. He’s well-conditioned and he likes to push the pace, as we saw in his last bout with Koba Iakobidze. I think he matches up well with me in terms of size, strength and conditioning. However, he won’t be able to overpower me, as I was a strong lightweight and I’m bringing that strength to feather. My skills are better than ever and I’ve fallen in love with boxing all over again so I’m ready to fight! The move to featherweight is the right choice for me, mainly because of my height and reach. I have the shortest reach at EFC AFRICA and I was one of the smaller lightweights, even though I wasn’t uncomfortable there. I’ve been dieting consistently and I’ve come down from 77kg to 73kg so far. The plan is to drop another 2kg or so and hold that weight so that I only have 5kg to cut before the fight. The hardest part of being a professional fighter is the diet, it really sucks, but it’ll be worth it when I win!”

EFC AFRICA 14 takes place at the Carnival City Big Top Arena on 1 June. Tickets on sale at Computicket www.Computicket.com and tickets for the live broadcast to Nu Metro Cinemas available at www.numetro.co.za