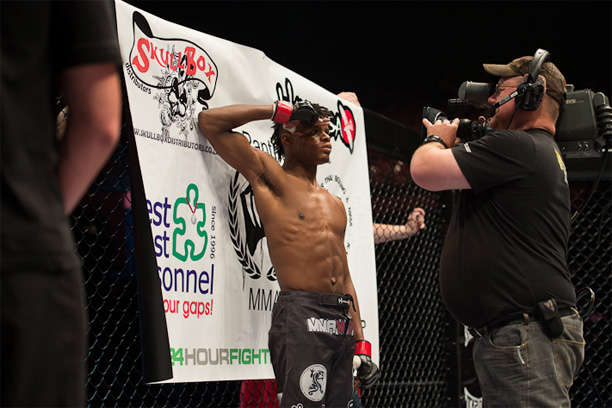 Johannesburg (South Africa) – Alain ‘Commander’ Ilunga hopes to make his home country, the Democratic Republic of the Congo (DRC), proud when he enters the EFC AFRICA hexagon to face Boyd Allen on 27 July. Ilunga’s dream has always been to be a professional fighter, and when he discovered EFC AFRICA in 2011, he immediately put all his time and energy into securing a contract with Africa’s premier mixed martial arts organisation.

As an amateur martial artist, Ilunga gathered experience in various fighting styles and took part in over 20 bouts in boxing, kickboxing and MMA, and secured multiple MMA victories by way of armbar. Much like his opponent at EFC AFRICA 15, Ilunga comes from a striking background but has come to grips with the grappling arts. In fact, Ilunga has stated that rather than relying on his tried and trusted kickboxing, he wants to see what Allen has to offer on the ground.
“I feel even more confident about this fight than I did for the last, as I now know what to expect at EFC. I am pushing myself every day to be ready for this, my game plan is completely different to the one I had before and I can’t wait to test Boyd’s skills, especially on the ground. I know he is from a boxing background and that he also has grappling skills, but I am dying to show off my ground skills! I hope he is tough because I enjoy walking out of the cage knowing I have had a real fight.”

Ilunga is 21 years old and fights out of Panther Fighting Arts in Cape Town. He made his EFC AFRICA debut on 1 June, defeating Koba Iakobidze in the third round of a fiercely contested slugfest. Ilunga eventually gained the upper hand and landed a kick to the body which crumpled his opponent and secured his second professional win. “I enjoyed my first EFC fight and I thank EFC for this great platform. I am really looking forward to growing with them. Fighting is my job so I will fight whoever the EFC matches me with. I know I will need to fight my way to the top and I look forward to proving myself.”