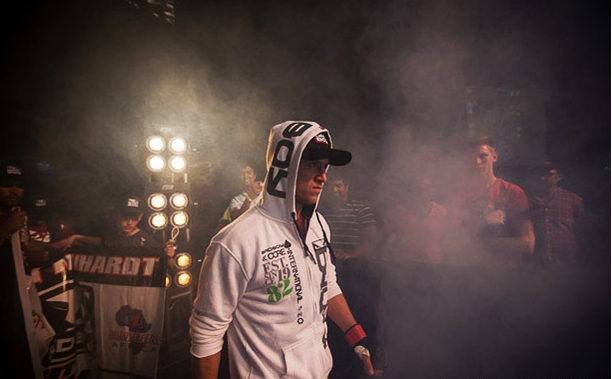 Johannesburg (South Africa) – Pretoria’s Leon ‘Iron Lion’ Mynhardt is without a doubt one of EFC AFRICA’s most exciting fighters. Committed, resilient and fearless, he wades into the thick of a fight with his characteristic Muay Thai kicks, punches, elbows and knees. At EFC AFRICA 13 in April this year, he fought striking prodigy Don Madge in EFC AFRICA’s bloodiest battle to date. Despite being peppered with lacerations, Mynhardt fought on and secured the win, and fans have been calling for his return since.

“After the fight with Don I had a few cuts, nothing serious, and luckily they healed fast,” says Mynhardt. “I rested for a week and eased back into training. After a fight I get pretty tired from releasing so much adrenaline, so I like to chill and get back into things slowly.”

Now, three months later, Mynhardt is ready for his next test. At EFC AFRICA 15, he will face Johannesburg submission specialist Alex Cheboub.
“I think Alex had it right when he said this is a fight that people want to see because he’s essentially a grappler and I’m a striker. He’s a dangerous opponent with a good ground game, so I respect him for that but, in my opinion, I’m being taught by the best ground coach in SA, Attila Barna. I’ve learned a lot that really works for me and been training with good grapplers like Michiel Opperman and Adam Speechly, so I think I stand a pretty good chance against Alex, even on the ground.”

In fact, when the two last met in a grappling competition, it was Mynhardt who won. How does he feel about Cheboub’s recent comments that there were mitigating circumstances for his loss?
“Whether Alex was at his best or not I really can’t say, I’m not in his shoes. All I can say is that when you enter a competition, you need to be fully prepared to deal with whatever might happen.”

With just a few days left before the caged clash with Cheboub, Mynhardt is looking forward to the opportunities that a win might bring.

“Right now I’m putting the final touches on my preparation. This is my last week of hard training before the weight cut next week, and I’ve just about reached my peak. I think I’ve worked my way into a good position in the lightweight division because in my last fight I took on one of the best for three rounds and won. It’s not for me to say who deserves what but, if it were up to me, I’d like a shot at the lightweight title if I win the fight with Alex.”