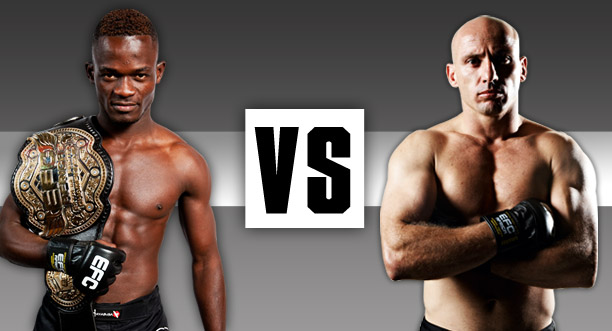 Johannesburg (South Africa) – Another title fight has been added to the EFC AFRICA 16 fight card, bringing the number of championship bouts to three! The latest addition to the evening’s already massive line-up is Demarte Pena vs Wentzel Nel for the EFC AFRICA featherweight title.

Reigning featherweight champion Demarte ‘The Wolf’ Pena first won the title in September 2011 and successfully defended it in June this year at EFC AFRICA 14. A new challenger has already emerged, former lightweight champ Wentzel ‘The Animal’ Nel, who is confident that he will be the first person to win a title in two EFC AFRICA divisions.
“I’m ecstatic about this title shot, I feel like I’ve just won the lotto!” says Nel. “I respect Demarte because he’s a hell of a competitor. Anyone that can win the title and defend it is a deserving champion. Demarte’s strong points are wrestling and jits, but his stand-up has improved 200 percent. I think I’m a better wrestler and I believe I have an advantage in the stand-up. I’m not saying I’m a better striker, but I do think I do a lot more damage when I connect. All-in-all, I expect a nice little war.”

Nel’s confidence doesn’t bother Pena, as he is already training hard and developing a plan to deal with any and all threats. “I learnt a lot in my first title defence and it really built my confidence,” says Pena. “I was able to stand with one of the best all-rounders in the division and submit him on the ground. Even though there were times the fight wasn’t going my way, the win made me believe in my ability to remain champion. Now that I’m facing Wentzel, a former champion himself, I believe that if I bring my best I can win. Wentzel is a strong wrestler and very durable, and his usual strategy is to put opponents on their back and pound them. Although he’s more experienced, I’ve picked up wrestling fast and mixed it well with jiu-jitsu. He may have an advantage with takedowns, but there’s no guarantee he’ll be able to get me down or be able to finish me even if he does. I have a lot of respect for him, I even trained with him once, but this is strictly business. We’ll put friendship aside and fight it out to see who deserves the belt.”

Also on the card, another two of the continent’s most eagerly anticipated title fights! At heavyweight, champion Ruan ‘Fangzz’ Potts will attempt to defend his title against Angolan wrecking machine Bernardo ‘Black Panther’ Mikixi. Potts is undefeated and already has one successful title defence under his belt. However, Mikixi has been on a rampage this year with two first round TKO victories, and he promises to bring even more destructive force to his title challenge. In the welterweight division, champion Jadyson Costa prepares to meet dangerous all-rounder Michiel Opperman. Costa outclassed and dominated three opponents to capture the title, but Opperman has proven his versatile skills by putting together an 8-fight win streak.

EFC AFRICA 16, presented by MusclePharm, takes place at the Carnival City Big Top Arena on 19 October. Tickets on sale soon at Computicket www.computicket.com and tickets for the live broadcast to Nu Metro Cinemas available soon at www.numetro.co.za. The three main card bouts will be broadcast live across Africa on e.tv, starting at 22h30 CAT