Griessel steps up as Nel withdraws due to injury 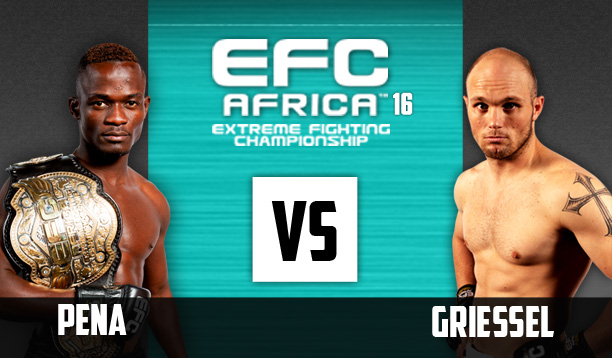 Johannesburg (South Africa) – The opportunity of a lifetime has just fallen into Terrence ‘The Trigger’ Griessel’s lap. Due to an injury suffered by EFC AFRICA featherweight title challenger Wentzel Nel, Griessel now has the opportunity to take on current champion Demarte Pena at EFC AFRICA 16.

Griessel is very aware that his good luck is a result of Nel’s misfortune, but he is also confident that he has what it takes to make the most of the unexpected title shot.
“Fortunately I’m in good shape because I was preparing for the SA Grappling Championships two weeks ago, where I became national champion in the 66 to 71kg no gi category,” said Griessel. “I have a few weeks left to sharpen my MMA game and I’m looking forward to this. Demarte is a great fighter; he’s got good stand-up, good ground and he’s extremely dedicated to the sport. I’m not expecting an easy fight because when we get to this level all fights are tough, but I’ve been with EFC AFRICA since the beginning, I’ve done my time and now I’m ready to become champion.”

As the reigning champion, Pena must prove himself against any and all threats. Even though he was preparing for Nel, he has committed to being ready for any challenge to his title.
“The change in opponent took me completely by surprise,” said Pena. “After training for months to be ready for Wentzel, I now have a few weeks to prepare for Terrence. I’d been working so hard on my wrestling so that I could take Wentzel down and put him on his back, but that approach has to change now that I’m facing Terrence, who’s more of a jiu-jitsu fighter. With Wentzel I wasn’t too worried about submissions, but Terrence is comfortable on his back and has dangerous guillotines, triangle chokes and armbars. It’s frustrating to have to change my strategy so much but, as a professional athlete, I’ve accepted the challenge.”

As for Nel, he’s currently in hospital undergoing treatment for a severely pinched nerve. Despite the physical pain and mental agony of losing a title shot, he wishes Pena and Griessel a good fight. “This is the worst injury I’ve ever had,” said Nel. “I’ve been in constant pain for over a week, I’ve lost 70 percent strength in my right arm and I have just about zero feeling in my right hand. At first I thought I tore my shoulder, but an x-ray and MRI revealed a severely pinched nerve between my L6 and L7 vertebrae. Right now I’m in traction in hospital, and will be for a few more days. The neurosurgeon says we’ll have to assess things in a few weeks, but he seems optimistic that we’ll be able to avoid surgery. If I don’t need surgery, I should be able to return to the cage in 2013. I’m happy for Terrence because he’s been working his butt off at EFC AFRICA. He’s only ever lost to me, so I think he deserves to take my place for the title shot. I wish them well as this will be a tough fight for both.”