Ultimate Showdown Of The Ginger Ninjas

Rightford vs Kruger at EFC AFRICA 16 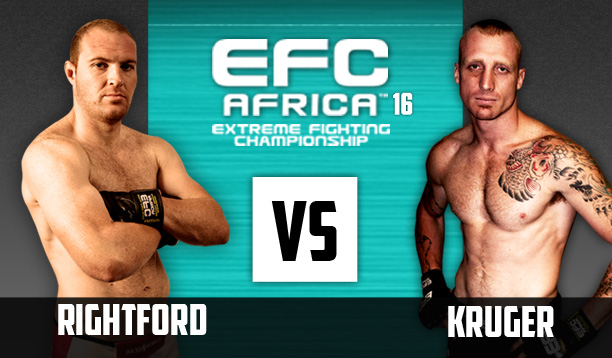 “I’m looking forward to this because of the way our styles match up,” says Rightford, who fights out of Alberton, Johannesburg. “We both hit hard, use a lot of movement and control the ring well, so this is going to be an interesting fight. Right now I’m training six hours a day and my cardio is 100 percent, so there are no issues getting in the way of the showdown. For my last fight, against Darren Daniel, I had a problem with my cardio. I had bronchitis two weeks before the fight and probably should have pulled out, but I decided to continue, so I can’t blame anyone else but me. Darren beat me fair and square, so well done to him. I was considering dropping to welterweight, but after the loss I decided to prove that I’m still a top middleweight contender. One loss doesn’t count me out of the running, I’ve improved since EFC 15 and I’m going to prove that against JP.”

According to Kruger, who fights out of Boksburg, Johannesburg, fans can expect non-stop striking action.
“Tyron’s a great karate fighter. I’ve seen him compete a few times and he’s made a very strong transition to MMA. He’s incredibly fast and a brilliant puncher, but he’s also got good floor work from training in Brazil. We match up pretty well because I’m a 3rd dan black belt in kickboxing, while I believe Tyron is a 3rd dan in karate. We’re both going to come in with a plan, and the guy that makes his plan stick is the one who’ll have his hand raised in victory. I’ve been working on a lot of Muay Thai in order to have sharp stand-up skills, and my training camp with Xtreme Kickboxing Technologies and Rio Grappling has been excellent. Tyron and I are both good fighters but I believe I have the edge in this match because I’m a bit more ginger.”