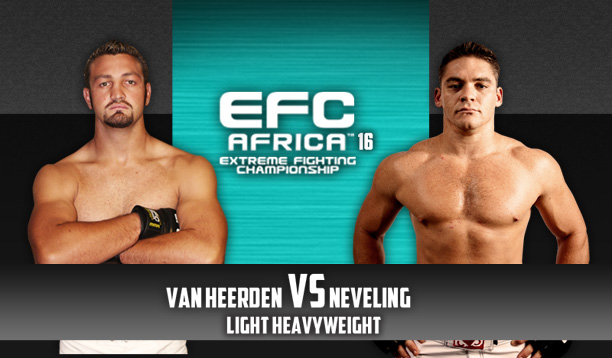 Johannesburg (South Africa) – An exciting light heavyweight bout has been added to the EFC AFRICA 16 fight card! Johannesburg’s Danie van Heerden, known for his toughness, will meet Durban’s Dain Neveling, known for his punching power, in the hexagon on 19 October. Which warrior will be able to implement a game plan to overcome the other’s strengths?

The bout will be a move back to light heavyweight for van Heerden, who has moved from heavyweight to light heavy, middleweight and now back again.
“I’m glad to be fighting at light heavyweight again because getting from 106kg to 84kg is a lot of stress and effort,” said van Heerden. “I’d much rather be worrying about training and eating food that tastes good for a change. Honestly, I don’t think much of the competition at light heavy and I expect things to be easier for me. The top two fighters right now are JP Joubert and Norman Wessels, and I want to fight both of them. We all fought as heavyweights in the early days of EFC AFRICA and now that we’re all back in the same division I have a few scores to settle.”

Van Heerden only has six weeks left to prepare for his bout at EFC AFRICA 16, but says that’s more than enough time to get ready for Neveling.
“I only got back to 100 percent training a few days ago because I was chilling as I thought I’d only be fighting in November or next year. But I’m not worried that I only have a month and a half to prepare, usually I do it in three weeks!”

Van Heerden last fought at EFC AFRICA 14, where he competed at middleweight and lost to Garreth McLellan.
“I was having a lekker fight with Garreth until he choked me! I had him in a guillotine, he escaped and kicked me in the head. After that I just wanted to knock him out and I got over-excited. I lost focus and made a simple mistake which allowed him to catch me in a rear naked choke. It wasn’t a great way to end the fight because I wanted to knock him out so bad! I don’t like leaving a fight when I still have strength left in my arms; if I’m strong enough to eat KFC afterwards then I should have thrown more punches! The loss didn’t worry me too much though because win or lose I take the result the same way, I just learn more from a loss. The big lesson from that fight was not to get carried away when I want to knock out my opponent.”

On 19 October, van Heerden will take on Dain Neveling in the hexagon. Neveling also suffered a loss in his last bout, but the heavy handed Durbanite vows to make victory his this time. “My last fight showed me that a lot of improvement was needed,” said Neveling. “I knew that fighting the ex-heavyweight champion would be tough, so I wasn’t too shocked when that proved to be the case. I would have liked the fight to last a bit longer but Norman caught me with a choke. I lost the fight, I learnt from it and made overall improvements to all areas of my game, and now I’m back to do better.”

According to Neveling, one of the biggest areas of improvement has been mindset and he’s now fully made the transition from amateur level MMA to professional.
“I’ve been putting in a lot of work over the past few months and now that my bout at EFC AFRICA 16 has been confirmed, I have a few weeks left to really up the intensity. I’ve also been working a lot on my mindset. I came from an amateur background of seven first round knockouts, believing that I’d be able to do the same thing at EFC AFRICA. However, more experienced fighters know how to handle that brawling style of fighting, which in turn has forced me to adapt. So my plan now is not to rush into anything, play around a bit and make sure that, win or lose, I get more ring time.”

As for his opponent, Neveling says he’s a bit of a fan, but that won’t stop him giving him a hiding when it’s time to do business.
“Danie’s a likable character with a likable style of fighting. He’s got a good boxing background and he keeps his ground game simple, but solid, which is really what he’s about. He’s got a lot of heart which is good because I like an opponent that can take a good beating! After my last bout I have to get a win, so I’m not going to take this test lying down. Danie, I want the win and I’m coming to get it.”