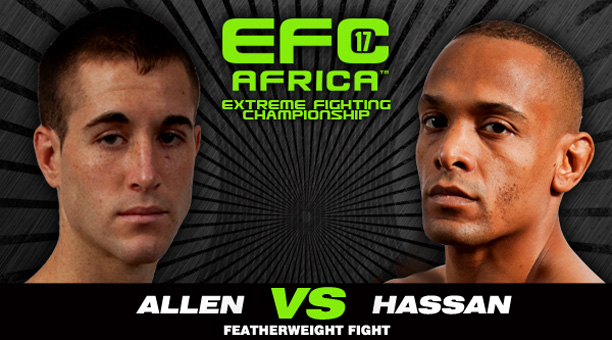 The 23-year old Allen comes from a boxing background, and considers his stand-up and outlook as his biggest strengths that give him the upper-hand in a fight. Allen submitted Alain Ilunga in the third round at EFC AFRICA 15 and he reckons that his tough training is enough preparation for any fight. “I have been preparing myself mentally and physically for a tough fight. I know Abdul has a good ground game and anything can happen. I look forward to representing my FFM-team and testing myself,” says Allen.

Hassen has shown that he is a force to be reckoned with. The 35-year old is a Brazilian Jiu-Jitsu and Kung Fu practitioner with years of experience. His last bout was against Leo Gloss at EFC AFRICA 13, with Hassan winning by unanimous decision. Hassan is looking for another win to propel him towards a shot at the featherweight title.