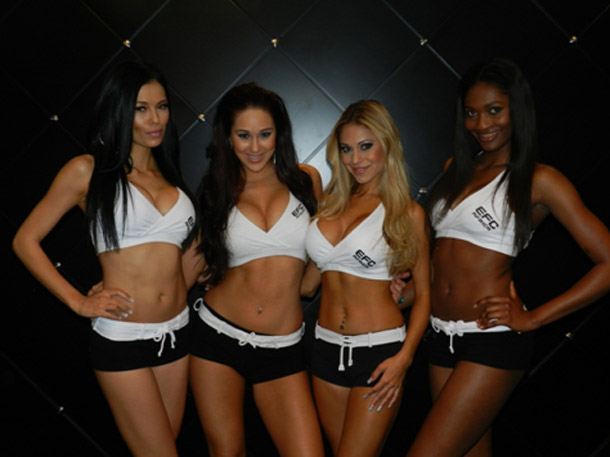 Johannesburg (South Africa) – With EFC AFRICA 16 only nine days away and excitement flaring up, the EFC Girls, Riana Roberts, Victoria De Lima, Naomi Das and Eno Akpan are counting down the minutes. The cage-side beauties were keen to tell us which bout they are most excited for, and also what the highlight of their fight night is.

Riana – Ruan Potts vs. Bernardo Mikixi “I think this is going to be an awesome fight! I really love the fights and I support quite a few people so I am really into it, and always look forward to having front row seats.

Victoria – Demarte Pena vs. Terrence Griessel “Since I have been involved with EFC AFRICA I have followed and learned about the athletes, and I am a huge fan and supporter. Being able to sit right up front and be close to the action is definitely a highlight for me.”

Naomi – Jadyson Costa vs. Michiel Opperman “This is such an exciting match-up in one of my favourtite weight divisions. I have always supported MMA and since EFC AFRICA started I always went to the events, even before I became an EFC Girl. I take up boxing myself so sitting up front and catching all the action is great.”

Eno – Wade Henderson vs. Tumelo Maphutha “Both athletes are great and exciting to watch. I love watching the fights and besides the part of being an EFC Girl, my highlight would definitely be the fights and watching Jadyson Costa!”