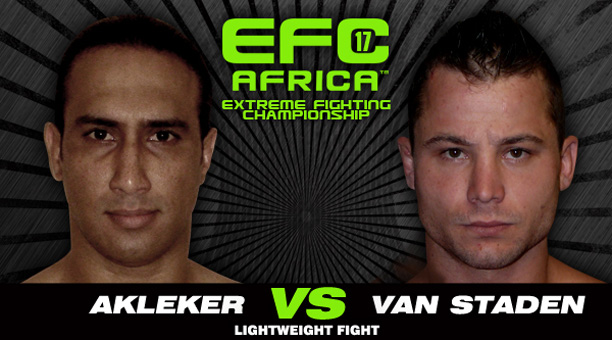 A lot of van Staden’s wins were the result of heavy punches and elbows, and he is feeling very confident about his encounter with Akleker. “I have been training hard and can only try my best, but I think it is safe to say that I am going to give him a hiding,” says Van Staden.

Akleker, who comes from a background loaded with Jiu-Jitsu, wrestling and Muay Thai experience, put up a tough fight in his EFC AFRICA debut against the experienced Wade Groth, and he is thoroughly amped for his bout against Van Staden. “I think Johan is a good opponent. He has had a lot of experience but of course I think I am going to win. You saw my last fight, standing or not, I am going to finish it and be the winner,” says Akleker.