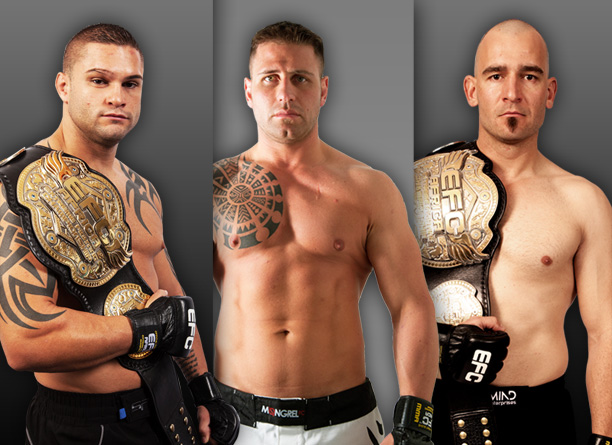 Johannesburg (South Africa) – The years biggest fight night, EFC AFRICA 16, is mere days away! Will Ruan Potts defend his title once more, or will Bernardo Mikixi stand at the beginning of a new heavyweight reign? A number of the EFC AFRICA star athletes gave their personal opinions and predicitons on the three title bouts. Fans across the world will watch these epic clashes unfold, presented by MusclePharm, broadcasting live from the Big Top Arena at Carnival City on 19 October.

Below are some of the thoughts and predictions for the main event fights – Ruan Potts vs. Bernardo Mikixi, Demarte Pena vs. Terrence Griessel and Jadyson Costa vs. Michiel Opperman.

Potts vs. Mikixi
“Wow, that’s a tough one. Obviously the one who throws the biggest punch will have the advantage. I think Potts has done well to keep the title and I believe that he will probably keep it. I know Bernardo has been working hard on his grappling game and it will be a great fight, but there is no doubt in my mind that Potts will keep the title.”

Pena vs. Griessel
“This will also be interesting but I can only say that Pena will keep the title. He has worked hard and I don’t think he will be beaten.”

Costa vs. Opperman
“I think Jadyson will keep his title. I don’t think Opperman isn’t technically up to standard, it’s just that Jadyson is really a level above the rest. I think the fight will be standing until Jadyson becomes uncomfortable, and then he will definitely finish it off on the ground.”

Potts vs. Mikixi
“Wow man, if Mikixi connects Potts there is going to be trouble! I think Potts will rather want to take it to the ground than keep it standing against Bernardo. If things go Mikixi’s way I think the fight will be over in the first round, and if it goes the way Potts wants it to it will probably be over in the third round. But I think Potts will take it.”

Pena vs. Griessel
“I like Griessel, he is such a nice guy. It’s going to be a very interesting fight and I think both of them are good. I think it’s going to come down to either a knockout or even points to determine the winner.”

Costa vs. Opperman
“Jeez man, I don’t know. I think Opperman is very underrated and he is an extremely good fighter, but Jadyson on the other hand has a lot of experience. I personally haven’t seen enough of Jadyson to make a technical call on this one.”

Potts vs. Mikixi
“I think if Ruan goes to the ground then Mikixi is going to be in trouble. Ruan won’t keep it standing. I think the fight will probably be over in the second round. I always like it if things end in the second round. Without a doubt Ruan will definitely keep his title.”

Pena vs. Griessel
“I know that Pena is a very strong fighter, but Terrence is going to teach him a lesson this time around. It doesn’t matter if the fight is kept standing, goes to the ground, or how many rounds it will continue for, Terrence will walk out as the victor.”

Costa vs. Opperman
“Costa definitely has a superb ground game, but Michiel is an absolute dark horse. He is a great fighter and I will back him for the win in this case.”