The ‘King’ And The ‘Young Assassin’ Collide 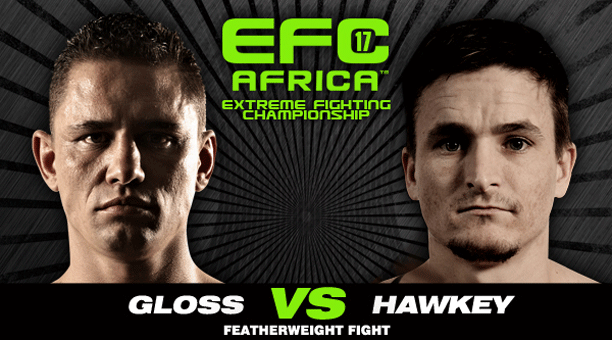 Gloss and Hawkey fought their way to title shots in the featherweight division, and both were denied the belt by the reigning champion Demarte Pena. A win on 23 November is the first step towards another shot at the title.

“I feel good, don’t want to let out all the surprises just yet, but the ‘King’ is back!” says Gloss, who has had shots at both the lightweight and featherweight titles. The ‘King’ looks to redeem himself and says he has had a great training camp, which will step up a notch in the three weeks counting down to EFC AFRICA 17.

‘The Young Assassin’ was on six fight winning streak before the loss to Pena, and is determined to start a new streak adding only victories to his record. “I am grateful to be able to fight again and the fans will see an awesome fight. Leo has very dangerous hands but that has never stopped me in the past,” says Hawkey.

This match-up plus the other nine prelim bouts are broadcast exclusively to Nu Metro cinemas across South Africa.