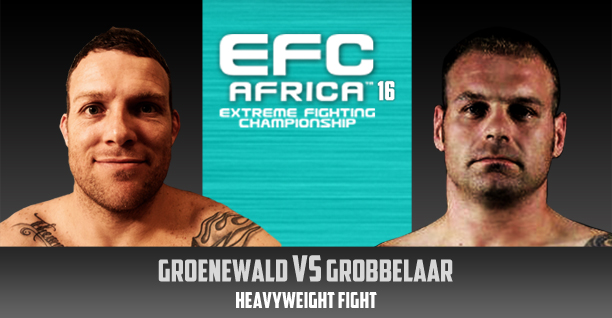 Johannesburg (South Africa) – Tyron ‘the Rush’ Rightford pulls out of his EFC AFRICA 16 bout with JP Kruger after tearing his intercostal muscles during training.

A replacement to face JP Kruger became a number one priority, and EFC AFRICA Matchmaker Graeme Cartmell asked a number of athletes if they would face Kruger on the 19th. However, surprisingly, all citing various reasons, Doanvin Hawkey, Victor Temlett, Liam Cleland, Sean Robinson, Tez Makeubo, Armand de Bruyn and Abrie Valentine all turned down the opportunity to face the formidable opponent.

‘This is a real pity and we wish Rightford all the best with his recovery’ said EFC AFRICA president Cairo Howarth. ‘Although I can’t believe that we could not get anyone else to face Kruger.’

Unfortunately, because no one would fight Kruger on such short notice, his fight has had to be scraped, and has been replaced with an exciting new heavyweight bout between two debut prospects from the coast.

Sors Grobbelaar and Brendon Groenewald will showcase their talents at EFC AFRICA 16. This is a great addition to the fight card and the heavyweight division, and both of these athletes have a lot to prove coming into Africa’s top promotion.