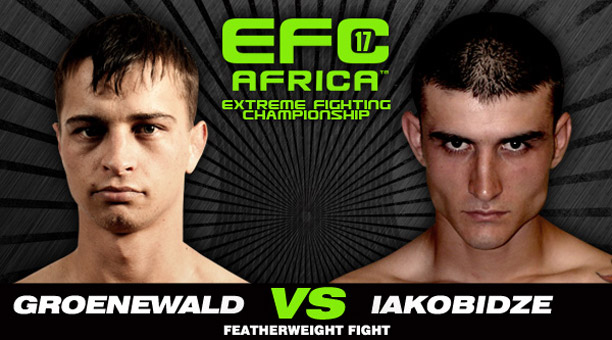 Johannesburg (South Africa) – Francois Groenewald (3-2) has stepped up on short notice to face Koba Iakobidze (1-3) at EFC AFRICA 17 on 23 November. Iakobidze’s original opponent, Jean-Luc Kazadi, pulled out due to an injury sustained in one of his training sessions. Kazadi tore a ligament in his right knee during a kickboxing and sparring session with Wade Henderson, rendering him unable to compete in two weeks time.

The strategic Groenewald, who has been training for this scenario to be a late replacement, dispatched of Kazadi at EFC AFRICA 16 with a triangle choke. He is more than happy to add another bout to his record. “I am very excited to be fighting Koba. I know he is a talented fighter and we have talked about fighting each other for a long time now. I have a lot of respect for him and we will put on a great show for the fans. Christmas will be coming early,” says Groenewald.

Iakobidze is not worried about the change of opponent with a mere two weeks to fight night, and is more confident than ever. “Groenewald is a good ground fighter but we start out standing. Even if it does go to the ground, I have no problem with that, I don’t believe I really have a weakness. He has got a lot to worry about and he knows it,” says Iakobidze.